Mindanao’s returnees get help with kelp 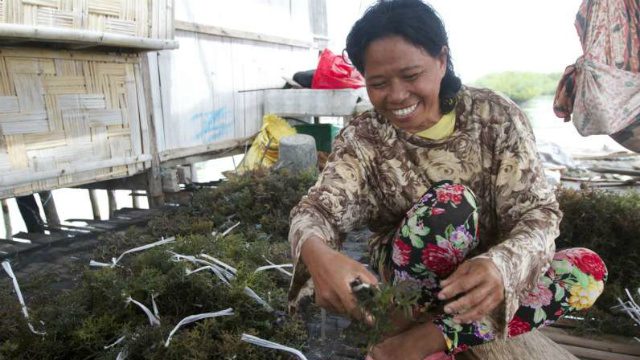 Facebook Twitter Copy URL
Copied
Displaced by conflict, some Mindanao residents are trying to get back on their feet through livelihood, but the temporary nature of their return still poses problems

ZAMBOANGA CITY, Philippines – For most of his life, Faizal Pasaki’s existence has been closely tied to the seas.

He begins his day at dawn, trailing his boat through the calm water into a field of empty plastic bottles bobbing on the surface, holding up ropes to harvest seaweed.

Until recently, indigenous groups of Muslim tribes like the Tausug and Sama Dilaut have been living in stilt houses and farming seaweed along the shores of idyllic island villages like Leha-Leha and Layag-Layag in Mindanao in southern Philippines.

This tradition was shattered when clashes broke out between armed groups and government forces in Zamboanga in September 2013. It was then called the Zamboanga siege.

Some 120,000 people were displaced from 11 coastal barangays. Many ended up in evacuation centers and camps, unsure if they would be allowed to return home or to resume their traditional livelihoods. (READ: ‘Humanitarian crisis’ in Zamboanga city)

After many months of living in squalid conditions in these camps, some 370 displaced people, among them vulnerable women and children, have returned to the island villages since last December.

“It’s good to be back here,” said Faizal Pasaki, a seaweed farmer trying to rebuild his life back in Leha-Leha.

He is looking forward to ending his family’s dependency on food provided by the local government. (READ: How conflict can lead to food insecurity)

“We have our livelihood here,” he said. “Life is here. We cannot continue to survive on canned sardines and instant noodles.”

Recognizing this, the United Nations High Commissioner for Refugees (UNHCR) is supporting a livelihoods project to build concrete platforms on stilts that will allow farmers to dry their seaweed under the sun.

Members of the community are helping with the construction. For example, Faizal is pouring cement into hollow wooden columns, while others fasten bamboo panels together for the flooring.

“All throughout their lives, seaweed farming has been their source of income,” UNHCR’s head of Mindanao operations Peter Deck said. “This is their traditional livelihood and it is through this that they can provide for their families.”

It is a worthy investment as a kilogram of fresh seaweed can sell for P4 ($.10)* while the same weight in dried seaweed can fetch nearly 9 times more in income. (READ: Better lives and nutrition through seaweeds)

In Leha-Leha, an air of normality is returning as people get back on their feet – children are going back to school, the women are at home tying bundles of seaweed for planting while the men are out at sea collecting seaweed.

But Faizal is concerned about the temporary nature of their return. For reasons of security and environmental hazards, the local government has announced a policy to designate island villages as “no return” zones.

Whether this policy will be lifted is still unclear. Authorities said geo-hazard mapping must be carried out first to establish that the areas are really hazard-prone and not fit for habitation.

The Philippine Commission on Human Rights is monitoring these issues that affect the rights of displaced families.

“We are people of the sea,” Faizal said. “There’s no other place we would rather be. Put us in another place and we would still find ourselves back here.”

Presently there are over 30,000 internally displaced people in Zamboanga city awaiting return or relocation to permanent shelters. The authorities target completing construction of these permanent shelters by June 2015.

Alongside other UN agencies and the rest of the humanitarian community, UNHCR welcomes solutions planned by the local authorities.

“Any durable solution implemented must recognize the IDPs’ right to freedom of movement and respect the right to return to their places of origin,” Deck emphasized. “Where return is not feasible, voluntary relocation must be considered and cultural sensitivity must be observed for this vulnerable group of indigenous people.”

Whether they opt for return or relocation, it will likely be a long road to recovery for Zamboanga’s displaced. – Rappler.com

Keneath John Bolisay is an aid worker for the United Nations High Commissioner for Refugees (UNHCR) in the Philippines. He started to work for those displaced by conflict and natural disasters because he wanted to make a difference, and this starts with telling their stories.