From street child to Atenean: The story of Rusty

Apr 13, 2015 5:36 PM PHT
Bobby Lagsa
Facebook Twitter Copy URL
Copied
Here is a story of how a street child, exposed to drugs and crime at a young age, went against all odds and graduated from Ateneo 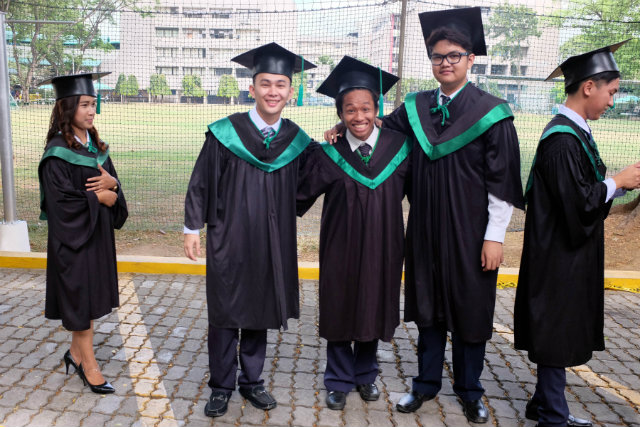 CAGAYAN DE ORO, Philippines – In late 2009, 20-year-old Rusty Quintana lined up at a classroom in Xavier University – Ateneo de Cagayan for a shot at one of the scholarship grants that the university offered.

Though unsure that he would get a chance of entering his dream university, he queued up anyway.

Rechelle Tolinero, a faculty of the Development Communication Department at XU, said that she first met Rusty on that day for an interview for a scholarship grant. “We knew right there that he was different, that there was something about him,” Tolinero said.

Rusty was wearing his best clothes that day – though his best was an almost tattered shirt and faded pants. He did not cut his hair for a while and his thick kinky hair stood out.

A native of the Agusan river in Barangay Florida in Butuan City with lineage from the indigenous Banwahon tribe, Rusty‘s brown skin and hair is hard not to miss.

“When it was his part for the interview, Rusty was quick to point out that if possible, we converse in Bisaya because he cannot speak English,” Tolinero said.

In fact, Rusty did not finish his elementary and high school.

Rusty was only armed with a diploma from the Alternative Learning System (ALS) of the Department of Education, a proof that he is eligible to enter college.

“But what struck us the most is his honesty and straight forward demeanor, when he came here, he had no pretentions that he knew something, or (that) he could speak English, unlike those who came before him in the queue who struggled to speak in English just to prove a point,” Tolinero said.

The kid from the streets

Rusty is a street kid who grew up outside the grand gates of Xavier University, near the historic Plaza Divisoria.

He was just 7 years old when he was plucked out of their home by his older brother, Rodolfo Quintana Jr, and was brought to Cagayan de Oro City in 1996, to get away from their troubled home.

Upon reaching Cagayan de Oro, they lived in shanties near the CDO River. There, Rusty spent his days outside the gates of XU, asking for some change and hanging out at the statue of Ramon Magsaysay.

One day, his brother disappeared. He later learned learned that he was arrested by the police on charges of drug pushing.

Rusty would soon find himself at the Mother Theresa Foundation, a shelter in Upper Puerto, where he spent almost 4 years.

While there, he attended Grade 5 “without proper documents, no birth certificate, no school record” because he just “attended school to learn.”

He was set for adoption by a foster home but fell ill with dengue and was later admitted to the Maria Reyna Hospital.

While at the hospital, recently released Rodolfo Jr found and took him back to Isla Delta where he was “exposed to criminal life” once again.

At 11 years old, he was asked to do drug runs by people in their community and, sometimes, he stole from other people. Soon enough, he got addicted to drugs and spent his days with other rugby boys in the area.

“We would inhale rugby, smoke dope, get high and pass out (due to) hunger,” Rusty said.

It was not long before he too was arrested by the police and was housed in Tahanan ng Kabataan, a rescue center for children in conflict with the law (CICL).

“It was soon to be that I would go in and out of the center, and at one point, I helped others escape the center, that after I was caught again, the center refused me already and I was put at the Lumbia City Jail with other minors,” Rusty said with a grin.

While at the city jail, Rusty said that he was made to confess to a crime he did not commit but was told that after the confession, he would be transferred to the Regional Rehabilitation Center for Youth (RRCY) in Gingoog City.

At the RRCY, Rusty was put on rehab and was cared for. His crimes were erased from police records.

In 2006, after spending two years at the RRCY, Rusty was again free. But he was homeless and went back to Divisoria.

From dream arts to dire husi

In 2007, Rusty saw an art exhibit at the City Tourism house, a block away from the Magsaysay Park where he frequents.

“I saw the paintings and sculptures and it captured my imagination,” Rusty said.

“He actually approached me, with a bamboo flute in hand while I was sketching at one of the tables,” Casino said. “We did not know each other.” 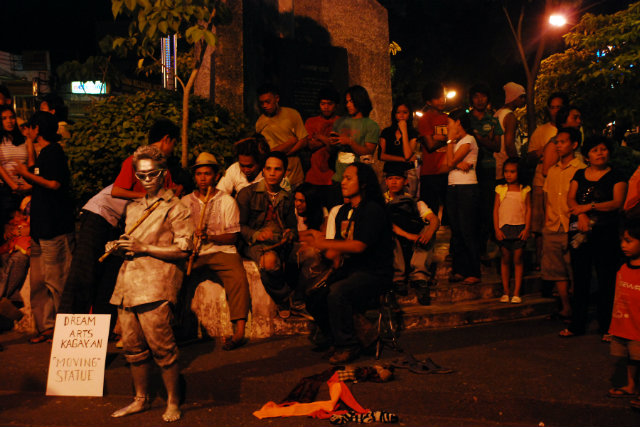 The two formed a bond bounded by art where Rusty learned to develop his visual arts skills.

“I asked Rusty if he wanted to change himself, and he said yes, so I took him in where he learned to do henna tattoo as an income generating activity,” Casino said.

Deri Husi (Here Friend) Initiatives, Inc. provided Rusty and other street artists and runaways a shelter and development center for them to hone their craft. The group uses art as a means to attract street kids off the streets.

“His determination is undeniable, where other students would just quit at small problem, he on the other hand never stops,” Casino said.

In 2010, Rusty was admitted to XU with a scholarship. He decided to study Development Communication and major in Education Communication. He could not believe that he got in, much less become a scholar.

“I know that getting in is just the first step and I worried that I may never survive the first semester,’ Rusty said.

It wasn’t an easy journey, Tolinero said, as Rusty did have a hard time while at school.

To sustain his education, he had to work while studying. He needed money for food and endless photocopies of books he couldn’t afford.

The P5,700 allowance given as part of his grant was not enough, so he soldart pens in campus and online.

A semester before graduating, Rusty found himself doing his thesis all alone after he was dropped from his thesis group. However, he persevered and in two months, was able to produce a full thesis on the Indigenous People’s Skills and Knowledge. 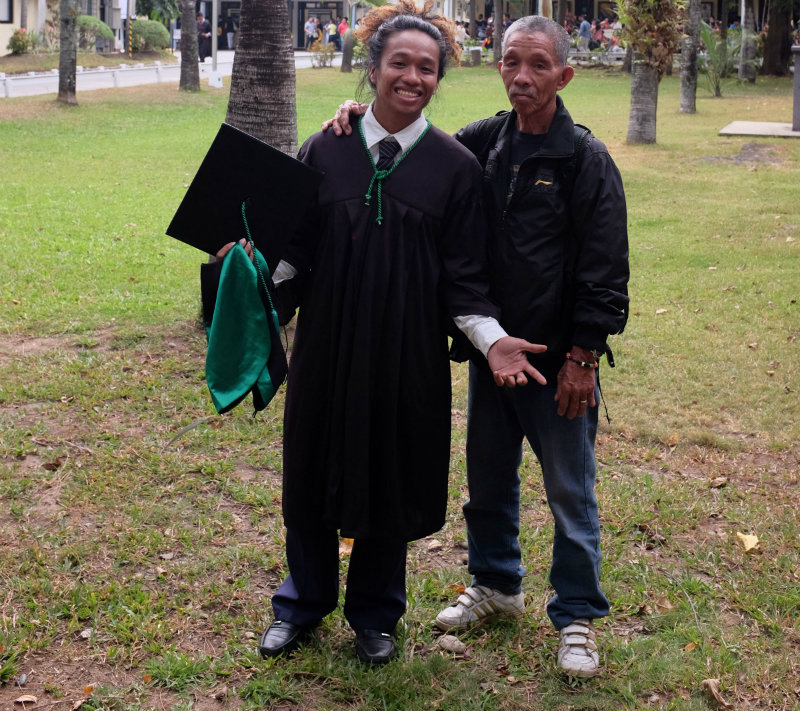 Last March 28, 2015, Rusty donned his toga and marched on his graduation day.

But even with a college degree, Rusty does not forget where he came from.

He pays forward by spending time with street kids, talking to them and encouraing them to get skills development as a way to get out of the streets – hoping they’ll get inspiration from his journey.

Rusty drew strength from the people he met while he was still struggling.

Determination was one of the things that helped him succeed despite a harsh past.

“He is not the brightest, smartest scholar, but he made up for it with sheer determination and drive, almost a hunger, and a motivation to do better,” Tolinero said.

Now, Rusty hopes to help other communities and his family.

“I am now considering the idea of working for a non-governmental organization where I can put my skills into action for a better community but at the same time giving my art some time to mature,” Rusty said. “I have now my father, my siblings and a nephew to think about, I must work for them, but they have to learn how to live too.”

And that’s a testament to his method of madness, his creative juices and frustrations molded into one and ending in a fusion of creative flow that in his own words: a healing process. – Rappler.com

Bobby Lagsa is a freelance photojournalist from Cagayan De Oro.