#FightFor15: Fil-Ams join fight for higher wages in US 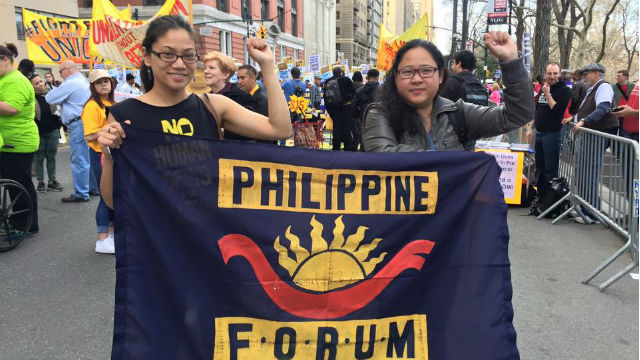 NEW YORK CITY, USA – When it began at 6 am on Wednesday, April 15, the deadline for the filing of income tax, only a handful of workers walked out of their jobs at fast food places in New York City.

By the time the marches to demand a $15-minimum wage ended, thousands, including teachers and health care workers, have joined the protests held in over 200 cities across the United States.

Hanalei Ramos, an organizer with Filipino Immigrant & Worker Organizing Project based in Jersey City, New Jersey, joined the whole day march, dubbed as “Fight for $15,” with other Filipinos.

“There are many Filipinos in Jersey City,” said Ramos, “who work in restaurants and fast food places and are earning sometimes even below the current minimum wage. They are really struggling to make ends meet.”

For several years, many have been calling for a raise in the minimum wage since prices of food and transportation have gone up. Many marchers say that what they earn working 40 hours a week is not enough to pay for rent and other basic costs of living.

“When I was working in a restaurant a couple of years ago, I was making $2.50 plus tip,” Joelle Eliza Lingat told Rappler. Lingat, president of Anakbayan New Jersey and a law student, joined the march with other Filipinos in Newark, New Jersey.

She said she experienced first hand the difficulty of trying to survive with barely enough to pay for her $875 studio apartment that she shared with a roommate. “I mean that’s all I could afford,” Lingat said. “The bathroom was on the hallway and the tenants from our floor shared it. I had a bathtub, but I had to pull it out from under the kitchen sink.”

NYC public transportation is $116.50 for a monthly pass. But some live outside of NYC because the rent is too high so that’s an estimated additional $89.00 monthly for the New Jersey train pass.The average rent for a one bedroom apartment in New York City is $2,973.

The worker is left with about $1,400 a month to pay for rent, utilities and food before taxes.

“These are the realities of the situation,” Lingat said. “That’s why we really need legislative action. It is not just one evil employer. It’s systematic.”

“Wall Streeters, hedge funders and other billionaires are pulling in even more money,” EPI reported, “while the people who cook their food, clean their airports or care for the sick and elderly continue to struggle to support themselves and their families.”

“We just want to make it for ourselves and for our families,” said Lingat.

According to the US Department of Labor,  a June 2014 survey found that more than 3 out of 5 small business owners support increasing the minimum wage to $10.10, the federal wage President Barack Obama suggested to Congress during his 2014 State of the Union address.

According to the survey, 58% of small business say raising the minimum wage would increase consumers’ purchasing power. Fifty three percent agree that with a higher minimum wage, businesses would benefit from lower employee turnover, increased productivity and customer satisfaction.

But Burger King co-founder David Edgerton gave a more cautious outlook. He told TIME that consumers will end up paying more for a whopper if minimum wage goes up.

“You’re not going to get these dollar hamburgers anymore that both Burger King and McDonald’s had,” Edgerton told TIME. “I see a lot of $10 hamburgers arriving on the scene.”

Protesters on the streets of Manhattan, however, told Rappler they don’t care for a $10 burger. They just want to earn enough to put food on the table. – Rappler.com