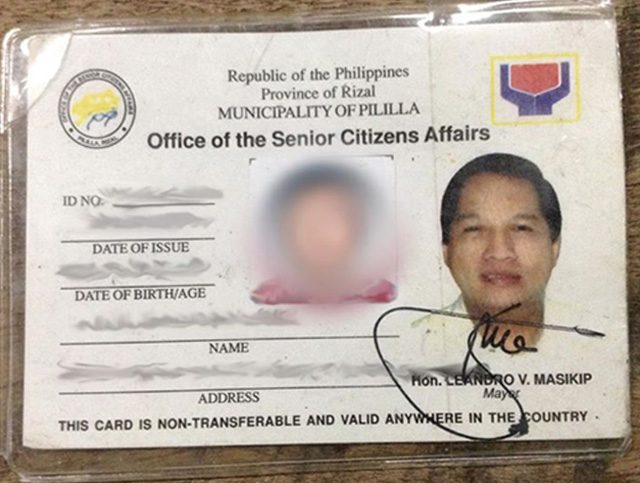 Facebook Twitter Copy URL
Copied
Whose ID is it? A mayor of Rizal is accused of inserting his photo in the senior citizen IDs of his constituents as an act of 'epal' or credit grabbing

MANILA, Philippines – An open letter calling out a suspended mayor in the province of Rizal went viral on Facebook.

Jasper Dela Cruz, who called himself an “ordinary concerned citizen,” posted with the letter a photo of an alleged identification card for senior citizens of Pililla in Rizal.

What put Dela Cruz off was the placement of suspended Mayor Leandro Masikip’s picture on the lower left side of the card – even bigger than the picture of the owner.

Masikip was suspended for 90 days starting February. The Office of the Ombudsman also charged him with falsification after he and another government official “made it appear that members of the Sangguniang Bayan of Pililla deliberated upon and passed” a resolution despite the council’s non-participation.

Dela Cruz insisted that an ID should “should bear information of the individual who carries it.”

“An ID should only contain a single picture, and that is the carrier’s own photo,” he wrote. “Have you seen an individual who has two faces? What would be the purpose of an ID if you’ll place two pictures on the card?”

He narrated that there are residents who applied for an ID at neighboring towns because of the mayor’s move.

“Let me remind you that an ID is not a political poster where you can just easily place your smiling face in,” he told Masikip in the letter.

“I’ve known other Pilillans who went on and got their senior citizen ID at our neighboring town, Tanay, Rizal. And other senior citizens from our town choose not to get discounts on certain establishments just because they are ashamed to present their ID with your face in it.” Dela Cruz challenged everyone reading the post to visit the municipality to prove that it is not “photoshopped” or edited.

He added that it is “is appropriate to call politicians epal (credit grabbers) whenever they practice that culture.”

“It is somewhat disheartening to live in a country where politicians practice a culture of putting/plastering their face & name on each and every possible area they can think of,” Dela Cruz wrote.

“Please don’t shove your faces/names to us.”

The word epal is colloquially used in the Philippines to describe public officials who display their names and faces to claim credit for government projects.

Senator Miriam Defensor Santiago filed the Anti-Epal Bill to prevent such instances. Several organizations also campaigned against the practice of “credit-grabbing” of politicians, especially as the 2016 presidential election draws near.

Dela Cruz called on Masikip to “correct his mistake” by providing new IDs to senior citizens.

“When new senior citizens get their IDs, I hope your face will no longer smile back on them because they are definitely not smiling back,” he said.  –  Rappler.com