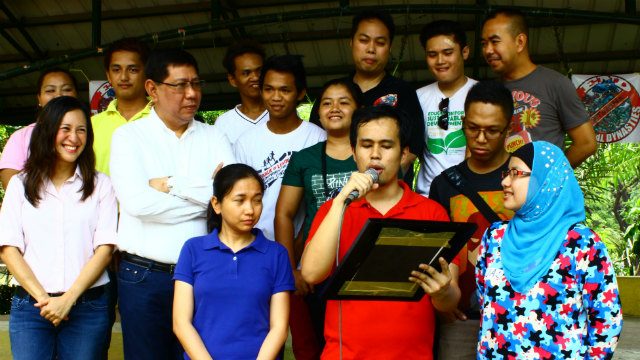 MANILA, Philippines – Exactly a year before the 2016 elections, various youth groups on Saturday, May 9, called for the urgent passage of the Anti-Dynasty Bill.

Members of youth groups from Quezon City, Caloocan City, and other parts of the Philippines assembled to express their views on inclusive democracy and their support for the bill.

The bill defines and prohibits dynastic political interests from elected public office, as stated in Article II, Section 26 of the 1987 Constitution.

To signify their call, a manifesto was presented to to Caloocan City Representative Edgar “Egay” Erice.

In the manifesto, youth leaders asserted that “despite these clear and unequivocal Constitutional directives, political dynasties have become more entrenched in Philippine politics thereby discouraging effective, empowering, and ethical leadership, especially among young people, from participating politically and running for public office.”

They also stated that they lament the result of the study by the Asian Institute of Management (AIM) Policy Center that the dominance of political dynasties is likewise high in regions with high poverty incidence.

An AIM Policy Center study by Ronald Mendoza, David Yap, Edsel Beja Jr., and Victor Venida found that 70% of the members of the 15th Congress were dynastic. The same study showed that 80% of the youngest congressmen belong to a political clan.

Quezon City Vice Mayor Joy Belmonte encouraged young people to be wise voters and to support the enactment of this law.

In her message, she argued that the youth have some shortcoming as electorates because they sometimes fall for the concept of ‘brand.’

“I encourage young people to be open for new players who have the desire to servebecause the essence of democracy is really equal opportunity or equal access to serving the people,” Belmonte said.

Erice meanwhile said gathering like this provides a venue for promoting awareness through discussions onthe detriments of political dynasty.

(It is difficult to fight political dynasties that is why there is a need to awaken the consciousness of the youth regarding its ill effects in our political and social life.) Seeing the harm of political dynasty

Some of the youth present said they have seen the harmful effects of political dynasties in their hometown.

Jasmine Alih, 25, said that there is no progress in her homeland in Mindanao – where power is linked in the chain of dynasties.

“I am sad to say that as a matter of fact, [the place] where I come from has the lowest literacy rate. That is one thing that we wanted to address while I was there but because we are not in power, our advocacies are not being met” Alih argued.

“I believe that everybody should be given fair chance to step forward for better leadership and also for better and more empowered governance” she added.

In the 2010 National Youth Assessment Survey (NYAS) conducted by the National Youth Commission (NYC) where around 5,800 young people aged 15-30 were surveyed in all 17 regions of the Philippines, findings say around 74-78% of the youth believe that political dynasties should be made illegal.

“We’re always told the youth are the leaders of tomorrow but the truth is,we can also be the leaders of today if we are given the chance. Vote new, not traditional politicians,” Raymond Rodis, a youth leader and Councilor of the UP Diliman University Student Council said.

Erice said the anti-Political Dynasty bill has already passed through the committee level, 28 years after the current Constitution took effect.

Plenary debates are also done, thus he expects they will have a vote on the bill probably this month. – Rappler.com

Ian Cigaral is an incoming senior Communication student at Far Eastern University and a Rappler intern.