Refugees in Southeast Asia: Should the Philippines care?

May 17, 2015 5:41 PM PHT
Josh Makalintal
Facebook Twitter Copy URL
Copied
'We pride ourselves for our hospitable culture, so why not start raising our awareness and begin talking about the critical situations happening next door?'

You love your country, being born and raised there, getting accustomed to the culture and the people and eventually starting a family there. But for some reason, your country, or at least your government, has denied your existence as a citizen – you, your family and hundreds and thousands of other people. Once denied citizenship, you lose your rights – the freedom to travel, to work, basic education and social security.

What do you do? You flee, of course. There’s nothing there for you, and the world is a big place and hope awaits. You set your sights to neighboring countries, hoping they would be welcoming to foreigners. After all, we essentially live in an interdependent and diverse world, so the concept of being foreign shouldn’t be seen as something alienating.

The plight of a refugee

There’s no other alternative. You are desperate. Soon you and your family embark on an already-overcrowded boat operated by untrustworthy smugglers. You set sail en route to the first foreign land you see, hoping their people would be inclined to help.

You finally reach their border. But they turn your boat around. They are unsympathetic to your despair and won’t listen to your appeals for asylum. You are officially stranded and hopelessly exhausted. Your children are starting to starve, but there’s nothing you could do.

Fortunately, the country that turned you away sends a helicopter to drop food and water from the air. But they are dropped into the sea, and you must swim to get them and let fate decide your course. (Read: About 1,400 Rohingya migrants rescued off Indonesia, Malaysia) 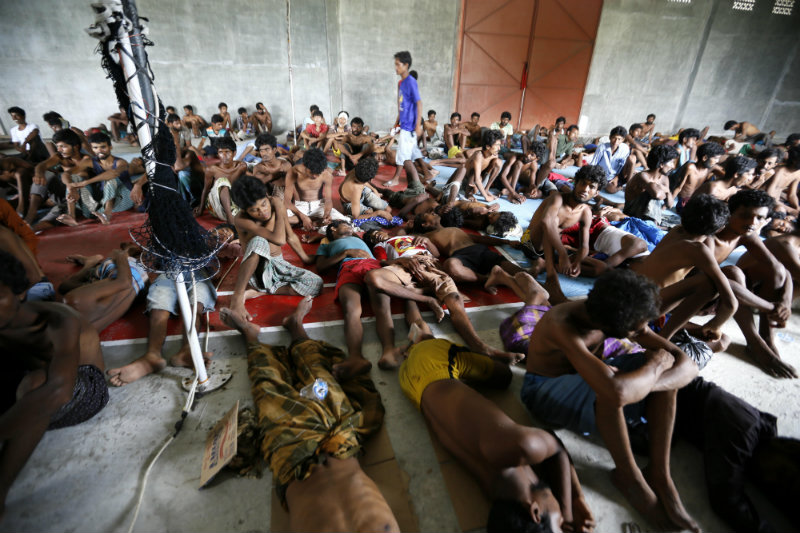 For them, they have nothing to gain in helping you. They have other priorities and responsibilities to their own nation’s prosperity. For them, you are unknown. You do not exist.

This is the plight endured by thousands of people fleeing persecution and instability in Myanmar, also known as Burma, and Bangladesh. They are refugees: stateless and desperate to seek protection and shelter.

The disunity of the ASEAN community

Most of the migrants are Rohingya Muslims, a minority group stemming from the predominantly Buddhist Myanmar. They have been excluded from Myanmar society and cannot go back lest face persecution. A number of them have fled to Bangladesh and are forced to live in poverty. The conditions have compelled them to journey further and seek refuge in their neighboring nations but to no avail.

Top destination countries include Thailand, Malaysia and Indonesia. More than a thousand people have landed on their shores after the harrowing odyssey at sea, but officials continue to assert their stance on turning future boats away, leaving the people stranded in the Andaman Sea where a number of people have already died due to starvation and seasickness. No country is willing to take them in.

That the Association of Southeast Asian Nations (ASEAN) plays a game of pass the ball using actual human beings is a reflection of the region’s weak commitment to peace. Good governance begins with realizing the true value of human life. And it is unacceptable and unrelenting for a union of nations that has pledged to secure the well-being of the region to just ignore the atrocities happening at its doorstep.

Southeast Asia resembling a European Union-like structure in the next decades would be a promising accomplishment. But there are some realities to confront in order to prosper. And this refugee crisis is one of the greatest obstacles ASEAN needs to face before going farther in its development.

Forget market-led growth strategy that would be realized through the upcoming ASEAN Economic Community, because the most crucial driver of genuine political change is how bordering nations would react to this escalating catastrophe. So far, it has been a disappointment. ASEAN has shown how many ways you can turn your back on your neighbors.

The responsibility to our citizens

Fortunately for Filipinos, our archipelago is relatively remote from our neighbors. Our nation does not have to go through the burden of managing the crisis. Moreover, our diverse cultures luckily get along together. But we have lots of domestic concerns that need to be addressed and we don’t have the resources to sustainably help the refugees. So why do we need to care about the strains of our neighbors?

Because as the world gets more interdependent and as ASEAN becomes more integrated, our sense of internationalism needs to be enhanced. We need to understand that refuge is never a voluntary act. These people were forced to flee and suffer a predicament just to follow their dreams to live a secure life.

Enhancing our sense of internationalism is to acknowledge the very essence of what it means to be an ASEAN citizen – “One Vision, One Identity, One Community.” We need to begin defining who we are as a region. Realizing an ASEAN identity does not mean to abandon our cultural differences, but instead to embrace our multicultural diversity and appreciate our interconnected community.

For the Association to thrive and progress as a regionally-integrated entity in the near future, we must begin to uphold the rights and security of our own citizens. A massive shift of focus is an imperative: from the pursuit of economic competition to actual cooperation between states. Integration must transform ASEAN to be truly centered on the concerns of the people.

Southeast Asia is not the only region where a migrant crisis is occurring. There are over 52 million forcibly-displaced people currently fleeing conflict and hostilities globally. They are exercising their fundamental right to seek refuge to somewhere secure. It is currently this century’s worst humanitarian disaster.

Every nation has a legal and moral responsibility to protect vulnerable populations from atrocities like this. We need to grasp the idea that safeguarding our commitment to secure the region should go hand in hand with the deference to human dignity. – Rappler.com

Joshua Makalintal is political activist based in Austria working in the fields of migration and human rights with the Federation of Young European Greens. He is an editor of The Ecosprinter and writes about the importance of regional integration in Europe on whygofederal.eu. Follow him on Twitter: @joshmaks