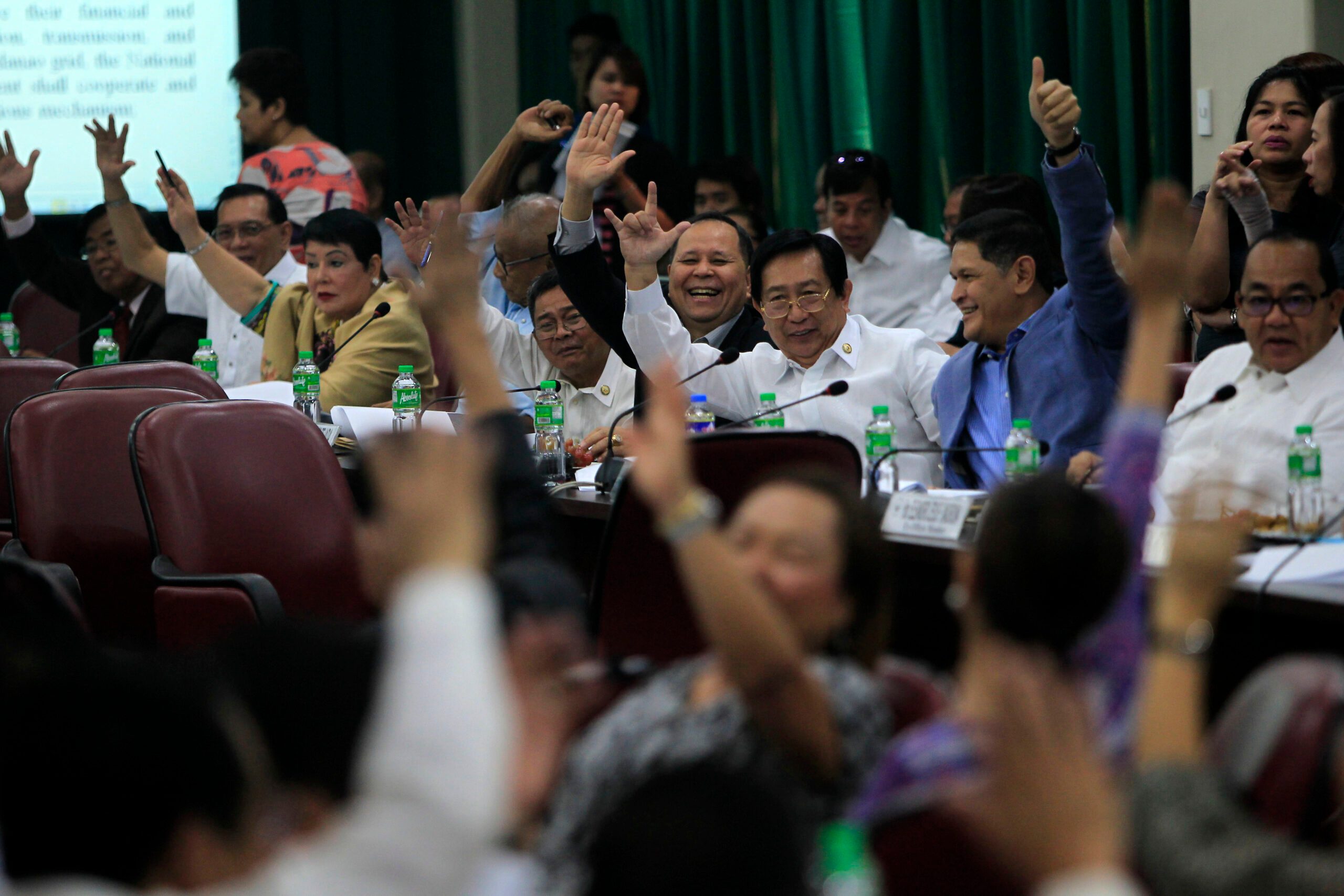 Facebook Twitter Copy URL
Copied
After holding a two-day hearing, the ad hoc committee on the proposed Bangsamoro Basic Law finished voting on all proposed amendments to the bill. The final committee vote on the proposed is set for Wednesday, May 20

MANILA, Philippines (UPDATED) – After holding a marathon two-day hearing, the ad hoc committee on the proposed Bangsamoro basic law (BBL) on Tuesday, May 19 finished voting on all proposed amendments to the bill.

Committee members will reconvene on Wednesday, May 20 at 1:30 pm to vote on the entire bill, said Cagayan de Oro Representative Rufus Rodriguez, chair of the committee.

Amid numerous proposals from Zamboanga Representative Celso Lobregat and other lawmakers for amendments, most provisions governing the creation of the Bangsamoro Parliament and the budget of the new autonomous region were retained after the grueling 13-hour vote that ended about 11 pm. (HIGHLIGHTS: House committee votes on Bangsamoro Basic Law)

The committee also approved the core areas that will be included in the plebscite to ratify the law: 5 ARMM provinces (Sulu, Tawi-Tawi, Basilan, Maguindanao, Lanao del Sur); 6 municipalities in Lano Del Norte; and barangays in the municipalities of Kabacan, Carmen, Aleosan, Pigkawayan, Pikit, Midsayap that voted yes to the ARMM plebiscite in 2001.

Lawmakers, however, voted to delete provisions creating a titular head to be called a Wali, which will serve ceremonial functions for the Bangsamoro Parliament.

The provision was deleted in what has been referred to as the chairperson and vice chairperson’s BBL draft – produced after a meeting between House leaders and President Benigno Aquino III days before the scheduled committee vote – over constitutional concerns. Rodriguez said the Wali position is an attribute of a sub-state. (DOCUMENT: Bangsamoro bill as approved in House committee)

The proposed Bangsamoro basic law seeks to create a new autonomous region in Mindanao with greater powers than what is currently in place. The new autonomous government will be parliamentary in form – the only one of its kind in a country with a unitary presidential system.

The BBL will implement the peace deal between the government and rebel group Moro Islamic Liberation Front, signed after 17 hears of negotiations.

Another key ammendment approved during Tuesday’s vote is the recognition of the Indigenous Peoples Rights Act in the BBL, an issue heavily lobbied for by the indigenous peoples groups (IPs).

The committee rejected amendments proposed by North Cotabato Representative Nancy Catamco. The proposal sought to give non-Moro IPs primary rights and responsibility over natural resources in their ancestral lands.

Also deleted were the list of IP groups that could qualify for reserved seats in the Bangsamoro Parliament. Lobregat proposed the amendment.

The committee also agreed to remove the provision requiring the chief minister and the central government to establish protocols for coordinating the movement of armed forces in the Bangsamoro areas. Lawmakers raised concerns over the provisions in the aftermath of the Mamasapano clash, where the lack of coordination was blamed for the death of 67 Filipinos.

The appointment of two deputy chief ministers for the Bangsamoro – instead of just one – was also added to the BBL. Each deputy will represent Southwestern Mindanao (Sulu, Basilan and Tawi-Tawi) and Central Mindanao (Maguindanao, Lanao del Sur and other areas).

Magdalo Representative Gary Alejano said the provision will address the Tausug’s fear that they would not be represented in the Bangsamoro Parliament.

Lobregat again had the most number of suggested changes compared to other lawmakers, with proposals registered for almost every section of the bill.

While he was successful inserting a number of provisions – such as requiring the application of the Salary Standardization Law to members of parliament – most of his provisions were denied by the majority vote.

The legislative process for the BBL marks the 2nd stage of the peace process, which would require the passage of the proposed law in Congress and through a plebiscite in identified areas. – Rappler.com