What I learned from living in the Middle East

May 30, 2015 8:48 PM PHT
Facebook Twitter Copy URL
Copied
'I learned more about myself that goes beyond knowledge. I gained the experience that taught me life lessons money can't buy.' After college I got accepted as a flight attendant.

The world is waiting for me. But there was a big catch: I would have to live in the Middle East.

I just graduated from college and was young. The world was a new place for me.

When I told my friends and family that I would be working there, reactions were mixed. I got puzzled stares, questions were raised, and they thought I was crazy.

But I had a feeling this was what I needed to do to realize my dreams.

Yes, we heard the horror stories of Filipinos working abroad but it’s not really all that bad. We Filipinos might have a flawed idea of what the Middle East actually is.

Truth be told, actually living and working there is a totally different ballgame and I learned a lot.

The Middle East is run predominantly by expats of different nationalities.

English is widely spoken and there are Filipinos wherever you go, literally. From the grocery store, to the restaurants, inside the banks, and everywhere else, there will always be a Filipino around.

There are Filipino restaurants everywhere. We had access to our favorite ingredients except for pork. But we had our Jollibee.

Religious practices might take a while to get used to. It is quite a shock at first to get used to their much more conservative norms. 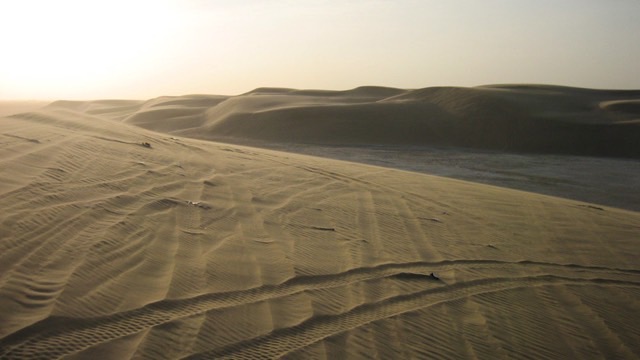 We are Filipinos and we are born survivors. It’s a difficult place to learn to live in, but it’s not impossible. If you want to live and work in the Middle East, here are a few things you can expect while living there, or even if you’re just interested visiting the region:

Wait till sundown to do your errands

The inevitable Middle Eastern heat during summer will make it hard to do anything in the day. Instead, you do all your errands and grocery shopping at night. Luckily, Middle Eastern people feel the same way and every store caters to this need by staying open very late.

Sunday is the new Monday

In a lot of countries, the normal weekend is Saturday and Sunday, but in several countries in the Middle East the weekend is Friday and Saturday. The first day of the work week is Sunday.

It takes time getting accustomed to, since most of us reserve Sundays for Mass or watching sports. And yes, they have Catholic churches in the Middle East. In Qatar, (at least while I was there) the priest was Filipino and some of the masses were said in Filipino. You will feel right at home!

The call to prayer will be your alarm clock and will become music to your ears (5 times a day).

The call to prayer, or salat, is broadcast on loudspeakers from the nearest mosque. Since mosques are everywhere, it can be heard from wherever you are and whatever city you are in. Usually, you will hear it pre-dawn, midday, afternoon sunset and night. If you are not used to it, it can be very distracting. However, once you have lived in the Middle East for some time, it turns into your second alarm clock!

Drinking alcohol in the Middle East is very restricted, and sometimes illegal, due to non-secular beliefs.

In more progressive countries like Bahrain, Qatar, and the UAE, bars and restaurants that serve alcohol are found only in 4-5 star hotels. So be prepared to dress up and pay! On the other hand, the service and ambiance do seem to make the nights feel a bit more special.

If you decide to go out drinking in the Middle East, be smart! My suggestion is party at the bar, or in your flat, but while you are between the two, keep a low profile. If you cause a ruckus you could end up in jail, or even be deported.

You will absolutely love this idea. Need groceries but don’t have time to stop? Call and have them delivered. Need your laundry done? Call! Feeling hungry for fast food and don’t want to get out of bed? Call and have it delivered. The list of things you can order by calling never ends.

Everyone is your habibi or friend

Habibi is an Arabic word that means friend or my love in a friendly and endearing way. “Habibi, lets go!” or “What do you want to eat, my friend?” You will surely adapt to this because everyone says it!

The excitement of rain

Rain is rare and therefore a reason for excitement. After some time it becomes something you will look forward to and get ecstatic about when it happens. You will laugh how the rain becomes the center of everyone’s conversations.

Filipinos account for a large portion of the population in the Middle East. As such, it is easy to stay with your own. However, I suggest you venture out to meet, interact, work and understand other cultures. Learn something from them and this will only make you a better person.

Get through dust storms

The Middle East will probably be one of the rare places you’d experience being in a typhoon of dust. You can stay safe by not driving and remaining indoors. Be prepared to deal with one hell of a mess when you get home.

If I were to do it again, would I still go? Yes! I learned a lot more about myself that goes beyond knowledge. I gained the experience of living in a foreign country that taught me life lessons money can’t buy. I realized that I am stronger because of it.

Fast forward years later, I was able to see the world. This is where I met my future husband and found friends I will treasure for the rest of my life. You may hate it or love it but in the end, it’s the experience that matters.

When you get there, live a life less ordinary. Eat the shawarma and barbecue, spend a weekend camping in the desert, and wonder through the luxurious malls. Enjoy everything the Middle East has to offer but don’t lose sight of why you came, to make money and improve your life.

Experience the Middle East for all its highs and lows. In the end, you will feel somewhat at home in this unlikely place. For me, there is simply nothing like it. – Rappler.com

Brock and Tangerine are a couple that shares their love of traveling. Brock is from the US and Tanj is from the Philippines. They’ve lived in 4 countries across 3 continents including Djibouti, Qatar, South Korea, and different parts of the US. Follow their blog here.