Jun 5, 2015 3:29 PM PHT
Leon Dulce
Facebook Twitter Copy URL
Copied
'DMCI’s persisting business model reflects not only on the inherently destructive nature of extractive industries in the Philippines, but also on the toothless and criminally negligent environmental governance in the country' Sporadic gunshots were heard not long afterwards, and after the gunfire subsided, villagers reportedly saw 6 company guards loading something wrapped in canvas on an elf truck that left a trail of blood as it sped away. No one has seen Calaba leave the outpost ever since.

Rights group Desaparecidos, who first reported the incident, said Calaba was the public information officer of the Kisasabana Dulangan Manobo (KIDUMA), a local indigenous organization opposed to the logging and mining operations of DMCI-owned companies in the province.

Since 1989, DMCI’s M&S Inc. and Silvicultural Industries have been running logging operations in a number of Integrated Forestry Management Areas (IFMA) covering a total of 24,380 hectares in the province. In 2000, DMCI’s South Davao Development Co. was approved to start exploring for gold and copper in 1,274 hectares within the M&S IFMA itself.

These operations have long been protested by the Dulangan Manobos for DMCI’s encroachment, deforestation, and displacement of indigenous people’s communities in their ancestral domains.

With a P56.6 billion revenue in 2014 and an 18% net profit surge in the first quarter of 2015, DMCI’s extractive and pollutive projects remain profitably at-large despite their notorious track record of environmental crimes and human rights violations. 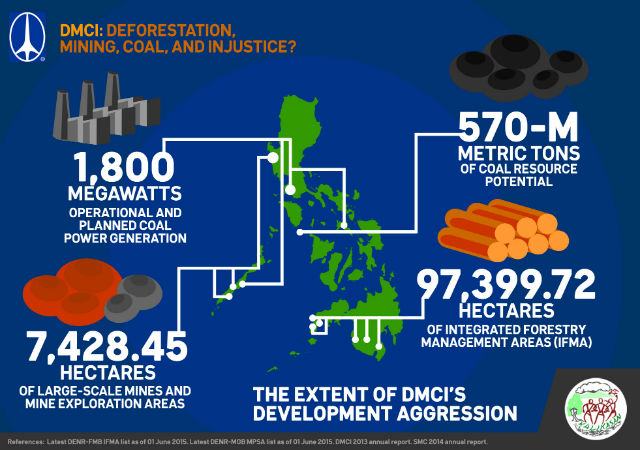 Alongside 3 other large-scale mines, DMCI’s 3,765-hectare nickel mining project in Santa Cruz town, Zambales province has caused extensive water pollution that has reportedly already affected 120 hectares of fish ponds, thousands of hectares of farmlands, and all the major rivers, creeks, and shores in the 6villages of Santa Cruz.

DMCI’s Semirara Coal Mine in Antique is the country’s biggest coal producer and a consistent environment and safety risk to its own workers and its host community, as well as its immediate marine environment. DMCI coal production directly feeds to the coal-fired power plants it owns.

Foreign investments are DMCI’s constant source of profit. According to their 2014 general information sheet, US-based construction firm Dacon Corporation has 45.77% of DMCI’s P13.27 billion total stock shares, while South African firm DFC Holdings has 17.86%. A number of US and Canadian financial firms also account for over 2% in DMCI’s stocks. 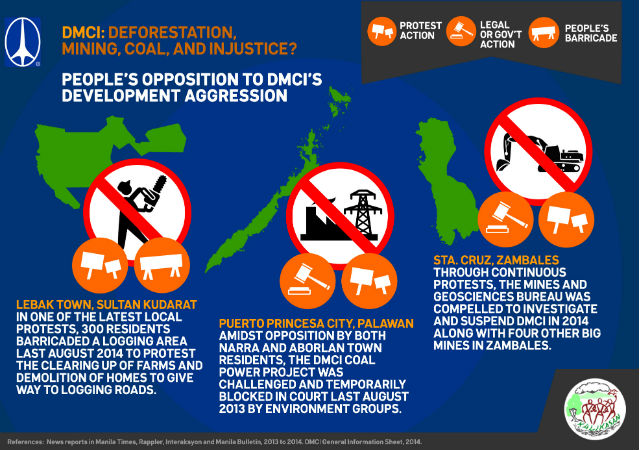 DMCI’s persisting business model, founded on a web of ‘development aggression’ and a wanton yet unpunished disregard of environmental and social costs, reflects not only on the inherently destructive nature of extractive industries in the Philippines, but also on the toothless and criminally negligent environmental governance in the country. 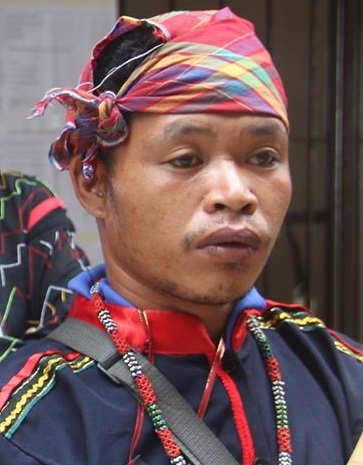 If the current administration of President Benigno Aquino III will not make an example of DMCI amidst its worsening track record, it is left to the people’s collective action to hold DMCI to account. On the coming global commemoration of World Environment Day on June 5, let us take concrete actions to demand justice from DMCI.

Let us raise awareness on the enforced disappearance of John Calaba. Send a message to DMCI, the Commission on Human Rights, and the Department of Justice to take action on the incident.

Our public officials, especially legislators from districts that host DMCI’s projects, must be compelled to investigate DMCI officials over the company’s various environmental and human rights crimes. Organize lobbying trips to their offices together with your fellow constituents.

The international community can contribute by demanding the abovementioned foreign investors to divest from DMCI. This is very possible – the Norwegian parliament has recently divested an estimated $5 billion of its sovereign wealth fund away from the coal sector, including its investments in DMCI and other coal projects in the Philippines.

Lastly and most importantly, let us join protest actions being mounted on June 5 directed at DMCI. The Kalikasan People’s Network for the Environment will picket DMCI’s headquarters in Makati in the morning, and the Palawan Alliance for Clean Energy will hold a protest at Mendoza Park in Puerto Princesa in the afternoon.

Let our actions speak loudest about our commitment to protect the environment and conserve our natural resources. Let us demand justice from DMCI! – Rappler.com

Leon Dulce is the campaign coordinator of the Kalikasan People’s Network for the Environment, a national alliance and campaign center on people’s environmental issues, and is a PH campaigner of international climate action movement 350.org.