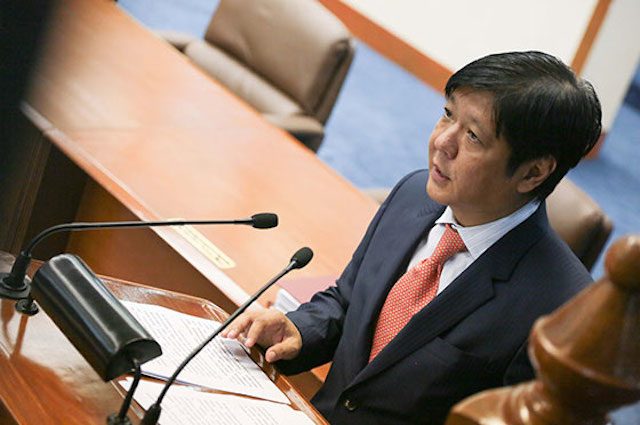 “Unfortunately, the BBL in its present form and substance will not bring us any closer to peace.  Instead, it will lead us to perdition. Armed conflict will ensue.  Blood will be shed. And when blood is shed, it will not distinguish between right and wrong; between young and old, neither between men and women, nor soldiers or rebels, combatants and civilians, rich, poor, Muslims, Christians.  Nobody wins.  Everybody loses,” Marcos said a privilege speech delivered Wednesday, June 3.

In an interview with reporters afterwards, Marcos said he will file a substitute bill that is substantially different from the original version submitted to Congress.

He will write the new version during the session break. Senate President Franklin Drilon earlier moved the deadline to pass the law to October after it became apparent that majority of senators find it unconstitutional.

“Mr. President, I repeat: I am for peace. I share our people’s thirst for peace. Pero napakarami pong mga masamang probisyon na napapaloob sa BBL at kung tatanggalin ko pong isa-isa, baka maski kahit anong retoke ang gawin, hindi makayang maibalik sa dating anyo ang BBL (There are many bad provisions in the BBL and if I remove them one by one, no matter retouching is done, the original form of the BBL can’t be retained),” Marcos said in his speech.

Marcos blamed the Office of the Presidential Adviser on the Peace Process (OPAPP). He said the agency “totally ignored the major stakeholders” in the peace process, including the Sultanate of Sulu, rebel group Moro National Liberation Front, Lumads or indigenous people, Christians, local government officials and businesses.

It seeks to create an autonomous government in Muslim Mindanao that is parliamentary in form, with greater powers and resources.

OPAPP earlier released a position paper detailing all 553 consultations that were conducted during the peace process under the Aquino administration. However, it is not clear how much of what was proposed during the consultations were taken up in the peace table or the crafting of the law.

The 15-member Bangsamoro Transition Commission, which crafted the first draft of the BBL submitted to Malacañang for review, also conducted about 700 consultations.

During the final public hearing conducted at the Senate Wednesday, officials of the Autonomous Region in Muslim Mindanao reiterated their support for the Bangsamoro bill but mayors and governors from select provinces in and out of the proposed region expressed varied opposition to it.

Marcos also echoed the position of Senator Miriam Defensor Santiago that the proposed bill is unconstitutional and needs charter change to be passed into law.

Marcos said the Bangsamoro creates a “state within a state” and cited the following reasons for the bill’s unconstitutionality:

Aside from constitutional issues, Marcos also raised objections over the following features of the proposed Bangsamoro government:

Public outcry over the clash led to a political fallout that eroded support for the bill.

“Even Malacanang has come to terms with the reality that Congress cannot reasonably be expected to be a rubber stamp. We value the expertise and the work done so far on the BBL, but both houses of Congress have the proper mandate to tackle the bill. Having said that, we hope to come up with an improved version,” Angara said.

It was during the regime of Marcos’ father, Marcos Sr, when the Muslim rebellion in Mindanao erupted.

Then University of the Philippines Professor Nur Misuari formed the MNLF after Muslim recruits were massacred in Corregidor Island to cover up a botched plot to reclaim Sabah. Only one survivor managed to escape the Jabidah Massacre.