Cardinal to Bongbong: Correct your father’s sins vs Muslims Facebook Twitter Copy URL
Copied
Cardinal Quevedo says Marcos should not disregard aspirations of the Bangsamoro, urging the senator to learn from the mistakes of his father

COTABATO CITY, Philippines – 60-year-old Normina Muhammad was widowed during turbulent times under the dictatorship of then president Ferdinand Marcos. Her husband, a farmer, died in a blast in Cotabato City in the early 1970s. With her children and other relatives, she moved to Manila to seek refuge and earn a living.

Muhammad said she had longed to see the day when she could finally return to her homeland, peaceful and progressive. She thought the Bangsamoro Basic Law (BBL) would pave the way for her homecoming. But she feared she has to wait again for years after the dictator’s son, Senator Ferdinand “Bongbong” Marcos Jr, announced in a privilege speech on June 3 he is rejecting the BBL.

“Unfortunately, the BBL in its present form and substance will not bring us any closer to peace. Instead, it will lead us to perdition. Armed conflict will ensue. Blood will be shed. And when blood is shed, it will not distinguish between right and wrong; between young and old, neither between men and women, nor soldiers or rebels, combatants and civilians, rich, poor, Muslims, Christians,” Marcos said.

He recently reiterated his rejection of the BBL in a video, stressing he would introduce a new measure.

Marcos, together with other 11 senators, signed a committee report that found the proposed measure unconstitutional.

But for Orlando Cardinal Quevedo, the Archbishop of Cotabato, it is not for Marcos to determine the fate of the Bangsamoro people.

“What I’m worried about is that the opinions of the people in Luzon, in the Visayas, and outside the Bangsamoro territory here would prevail over the deep aspirations of the Bangsamoro that go back to centuries,” Quevedo told Rappler.

Quevedo said Marcos should not disregard those aspirations, urging the senator to learn from the mistakes of his father.

“There should be some kind of a learning from that (part of) history; maybe correcting what some people say that was an error of the father,” Quevedo said. (READ: 4 scenarios if Bangsamoro bill is not passed)

As a young priest who served as president of the Notre Dame University in Cotabato City during the Martial Law years, Quevedo said he witnessed how government forces mercilessly bombed Muslim areas.

“I was with Christian and Muslim students watching the jets, hearing the explosions, when a Muslim student said: ‘Father, it’s unfair. My cousins are there, but they don’t have bullets and missiles,” Quevedo recalled an instance which deeply disturbed him. 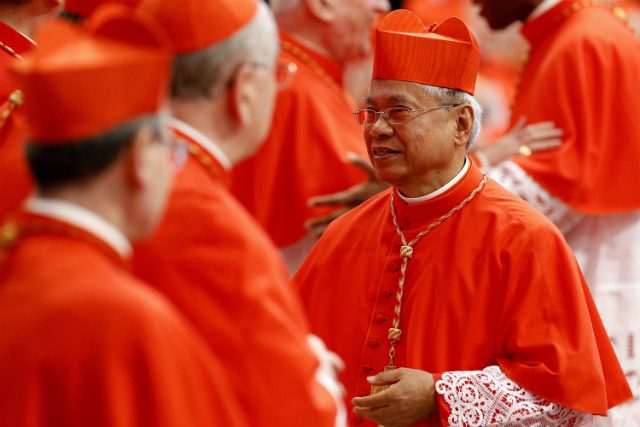 Quevedo’s paper, “Injustice: The Root of Conflict in Mindanao,” provides an overview of the historical problems in Mindanao based on the cardinal’s long history of peace advocacy work in conflict areas in the South. It covers the following:

“The BBL is a response that addressed the root causes and provides the realization of the self-determination of the Bangsamoro as a Moro people,” Quevedo, the first cardinal from Mindanao, said. (READ: Jabidah Massacre: Acknowledge ‘historical injustice’)

There are nearly 4 million Muslims in Mindanao, which they consider their homeland dating back to the pre-colonial Islamic sultanates.

(I hope Senator Marcos realizes and eventually grants it to us [approval of the bill] because it’s painful to think that we were so close to the passage of the BBL before it got derailed. I hope they just push through with it.)

“I cannot see how such work can be completely dismissed and rejected and a new bill is placed (just) because there was some consultation in the past two months,” Quevedo said, taking a swipe at Marcos’ claim that the bill is not inclusive.

“I can see statements like it needs some amendments, but to reject it completely and to put a new bill is worrisome,” Quevedo added.

Quevedo earlier supported the recommendations of the Malacañang-convened Peace Council, including the articulation of indigenous peoples’ rights in the BBL. The House of Representatives ad hoc committee on the proposed BBL approved amendments that would protect indigenous peoples’ rights in the Bangsamoro autonomous region. (WATCH: Rappler Talk: Are the Lumad victims in war and peace?)

The BBL proposes to form an autonomous government in Muslim Mindanao that is parliamentary in form, providing it with greater powers and resources.

On Tuesday, June 9, Marcos, chairman of the Senate committee on local government, will conduct the last Senate committee hearing on the BBL focusing on taxation and control of natural resources within the proposed territory. – Rappler.com