Jun 12, 2015 11:23 AM PHT
Justine Hernandez
Facebook Twitter Copy URL
Copied
Here are some of the major historical feats that best depict Filipinos’ collective will and initiative. Do you have anything to add to this list? Share them with us! 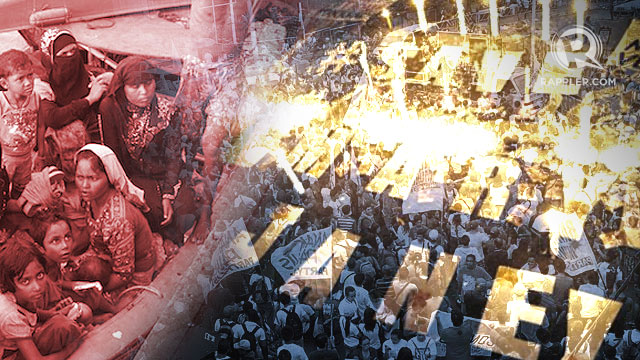 MANILA, Philippines – For many years, Filipinos have exhibited nationalism and benevolence in more ways than one.

From protests against an unjust government to receiving refugees fleeing from oppressive rule, Filipinos have shown their strong involvement with political processes, their strict condemnation of ignorance, and their collective willingness to selflessly reach out to those in peril without asking for anything in return.

These are some of the major historical feats that best depict Filipinos’ collective will and initiative:

In 1939, about 1,200 European Jews fled from Nazi Germany. While Cuba and Florida failed to help the refugees, the Philippine Commonwealth accepted them with the help of Philip Freider, who headed the Jewish Refugee Committee in Manila for the settlement of the refugees.

In honor of the Philippines’ charitable deed of welcoming the Holocaust refugees, a monument – which came in the form of 3 open doors – was set up at the Holocaust Memorial Park in Israel.

In 1978, thousands of Vietnamese fled their country by boat to escape the Vietnamese war. Like the Holocaust refugees, they found themselves on Philippine soil. The country, through the Philippine Refugee Processing Center, accommodated over 400,000  Indochina refugees.

In the aftermath of Super Typhoon Yolanda (Haiyan) in 2013, former refugees donated more than $400,000 for the rehabilitation of the severely affected areas of the Philippine as a token of gratitude for welcoming them into the country.

The People Power Revolution, also known as the EDSA Revolution and the Yellow Revolution, was a successful attempt by the Filipino people to oust then president Ferdinand Marcos. This was 14 years after he declared Martial Law through Presidential Proclamation No.1081, giving him dominion over all government processes.

Marcos, who was set to end step down in 1973 after a second consecutive term, proclaimed martial law in 1972 reportedly to keep his presidential seat, suppress the growing number of adversaries, and end civil strife. However, as he remained in office, Filipinos started to disapprove of his rule. This sentiment was fanned by the fraudulent 1986 presidential snap elections, and charges of corruption.

The Edsa Revolution, which took place at the Epifanio de los Santos Avenue, gathered over two million Filipinos, including celebrities and political and religious figures. As a result of the protest, Marcos stepped down from office.  Corazon Aquino took her oath as president on February 25, 1986.

The Million People March was a protest which gathered thousands of people, including celebrities, political figures, religious figures, and individuals belonging to different organizations and groups. They were united by a  common purpose – to call for the abolition of the pork barrel. Tagged as biggest corruption scandal in the Philippines to date, the pork barrel scam revealed how businesswoman Janet Lim-Napoles, with the help of some lawmakers and civil servants, pocketed billions of pesos of government funds. It took place in Luneta Park on August 26, 2013.

The hashtag #Millionpeoplemarch and #ScrapPork topped Twitter’s trend list on the day of the protest. The struggle to have the pork barel scrapped was not only evident in Manila as locals from Cebu, Iloilo, and Albay also staged protests in their respective provinces.

Among the most significant events in the country involving collective action by Filipino citizens is the #SaveMaryJane campaign in social media – particularly on Twitter and Facebook. This campaign was in light of the case of Mary Jane Veloso, a Filipina migrant worker duped into smuggling 2.6 kilograms of heroin into Indonesia in April 2010. She was later sentenced to death by the Indonesian government.

Her pleas to the Philippine government urged a huge wave of supporters in cyberspace. The hashtag “#SaveMaryJane” remained on Twitter’s world trend list for days, and the supporters’ constant posts on Facebook about the issue fueled debates online.

According to a Paul Rowland, a political analyst from Jakarta, although the reprieve was based on a combination of factors, “governments have proven to be sensitive to hashtags,” noting the fact that the #SaveMaryJane campaign was among the highest trending topics on Twitter.

6. Refuge for the ‘stateless’ Rohingya people

In 2015, the Philippine government expressed its willingness to welcome the Rohingya people – a Muslim ethnic minority group fleeing persecution in MYanmar – after being refused in Indonesia and Thailand.

The Rohingya people lack legal protection from the Myanmar government as they are not recognized as citizens of the country. They then started seeking support from other countries who might be able to provide them with humanitarian support.

Do you have anything to add to this list? What events made you proud as a Filipino? Share them with us using #PhilippinesIndependeceDay! – Rappler.com