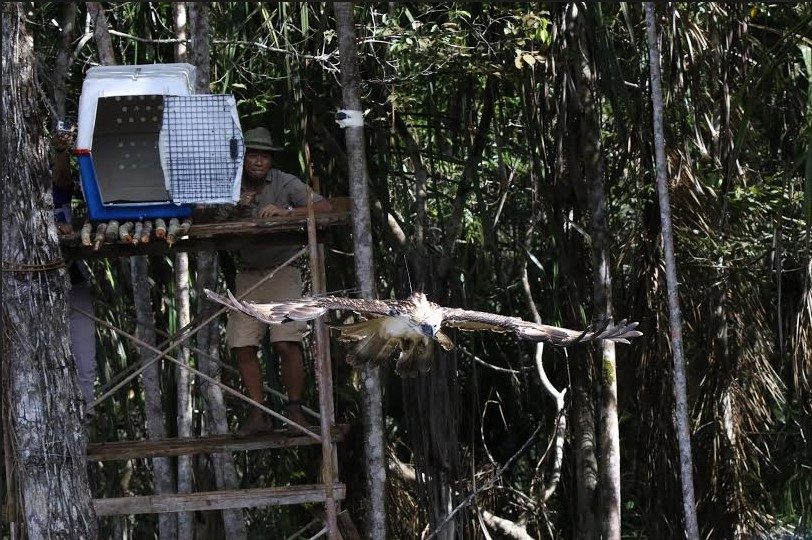 MANILA, Philippines – While the rest of the Philippines was celebrating Independence Day on Friday, June 12, 2015, a group of conservationists were also giving Pamana, a rehabilitated Philippine Eagle, the chance to live independently in the wild.

Kim Atienza, also known as “Kuya Kim” of the ABS-CBN TV show Matanglawin, aided the Philippine Eagle Foundation (PEF) and the enterprise ICT arm of Globe Telecom in the release of Pamana to its natural habitat, the Mt. Hamiguitan Range in Davao Oriental.

Pamana was brought to the Philippine Eagle Center in Davao City where she was nursed, and cared for in the past 3 years. (Read: #ShareDavao: Is there a future for the Philippine eagle)

Now that Pamana is fully recovered, PEF Director Dennis Salvador told Rappler in a phone interview that the eagle was set free on Independence Day to underscore the importance of heritage and legacy.

“Pamana is meant to be set free. We chose independence day because it is a good reminder of our national heritage,” Salvador said.

He added, “Our goal has always been to restore the species’ wild population. The forest is where they belong.”

This is not to say that Pamana’s freedom can be totally guaranteed in the wild.

“They will always be in danger, hopefully only from natural causes,” Salvador said. “The primary danger this top predator faces is often human-induced through shooting and trapping.”

According to the PEF, the Philippine Eagle (scientific name Pithecophaga jefferyi) is listed as “critically endangered” in the International Union for Conservation of Nature.

This is due to severe loss of habitat, extreme dwindling population and the possibility of future generations not seeing them in the wild. (Read: State of threatened PH birds: New dangers, new solutions)

Apart from loss of habitat, Philippine eagles are also hunted for their talons, which may be sold for as much as $200 per pair. Other parts are valuable as well, making the Philippine eagle a priced target for poaching. The whole body is marked as high as $1,000. (Read: Captured Philippine Eagle handed over to DENR)

Salvador said the foundation chose Mt. Hamiguitan as Pamana’s refuge because of the local stakeholders’ commitment to protect everything in it.

Salvador said that it was only Pamana that has been set free, more are to be released in the wild but not in the immediate future.

For this reason, the foundation has been raising funds that will not only help in the rehabilitation and release of the remaining eagles, but also for different aspects of their work such as relief, livelihood programs and improved connectivity within the area to track the eagles.

“It is not enough to set the bird free. We have to track them,” Salvador said.

The effort also needs to be supported through awareness and education of the surrounding communities around Mt. Hamiguitan to ensure safety of the endangered species. To finance its efforts, the PEF is selling stuffed toys of Philippine eagles on its site for P565 ($12.47). The public may also choose to donate through the foundation’s website.

Aside from charity, the PEF has opened its doors for people to “adopt” an eagle. Foster parents will support research, rescue, education and other efforts to save and protect the adopted eagle.

The website features a gallery of Philippine eagles that corporations or individuals may want to “adopt.”

“The idea is for ordinary Filipinos to participate and contribute in this effort,” Salvador said.

Globe Telecom has set up a service that allows the general public to make small donations.

Globe Business has been a partner of PEF for the past 3 years according to the company’s press release. For this duration, the telecommunications company has given PEF a total of P1.2 million ($26,492) in funding.

For 2015, Globe Senior Vice-President for the Enterprise Group Nikko Acosta confirmed that the company will be giving PEF an additional P500,000 ($11,038) grant to ensure that more Philippine eagles like Pamana can be cared for, and eventually set free in the wild.

“As an ecologically-responsible company, we take pride in finding opportunities to show our genuine care for the Philippine environment as well as the creatures which thrive within them, such as our collaboration with the PEF,” said Acosta in a press release.

“As Pamana takes flight on the most important day of our nationhood, we also hope to fire up the spirit of pride and environmental consciousness among Filipinos as individuals, as well as being the sentinels of Mother Nature within the industries they work for,” Acosta said. – Aika Rey/Rappler.com