High school students learn how to prepare for quakes

Jun 18, 2015 2:54 PM PHT
Rappler.com
Facebook Twitter Copy URL
Copied
The short workshop is organized by the school's alumni association as a way to give back to their high school by teaching kids the value of preparedness 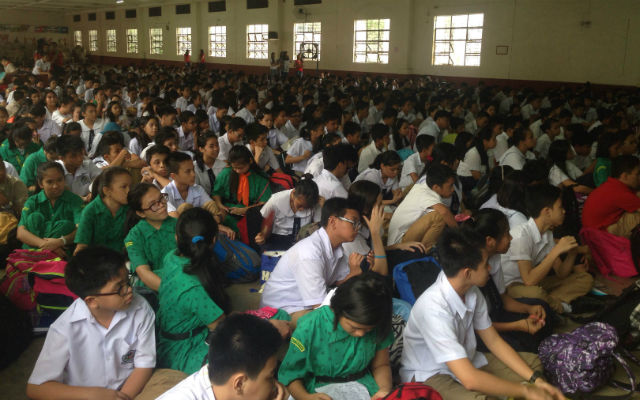 MANILA, Philippines – Around 600 students from Victorino Mapa High School learned how to prepare for earthquakes and use social media during disasters on Thursday, June 18.

Disaster responder Ramon Regalario gave a talk on what students should do before, during, and after an earthquake. He discussed the dangers students face when the “big one” – an anticipated 7.9-magnitude earthquake caused by the movement of the West Valley Fault – strikes. (READ: Schools, hospitals near West Valley Fault)

“Preparedness starts not in the community. It starts in the family and the individual level…Make sure you survive when the big earthquake strikes,” he said.

In 2004, the Philippine Institute of Volcanology and Seismology (Phivolcs) and MMDA, together with the Japan International Cooperation Agency (JICA), conducted a study called the Metro Manila Earthquake Impact Reduction Study (MMEIRS). Based on the study, about 40% of the residential buildings in Metro Manila will be heavily or partially damaged. Hundreds of thousands will suffer injury and die, the study suggested.

In May 2015, Phivolcs launched The Valley Fault System Atlas, a handbook with 33 map sheets of cities traversed by the East Valley Fault and West Valley Fault. (WATCH: Project MOVE: Preparing for earthquakes)

The use of social media

“We can go beyond selfies. We can use social media to spread awareness on the hazards we face and save lives in times of crisis,” Lozada said.

Operated by MovePH, Rappler’s civic engagement arm, Project Agos uses technology and crowdsourcing to make sure critical information and alerts in times of disasters reach those who need it most.

The short workshop was organized by the school’s alumni association as a way to give back to their high school.

The students were also encouraged to participate in the metro-wide earthquake drill on July 30. – Rappler.com