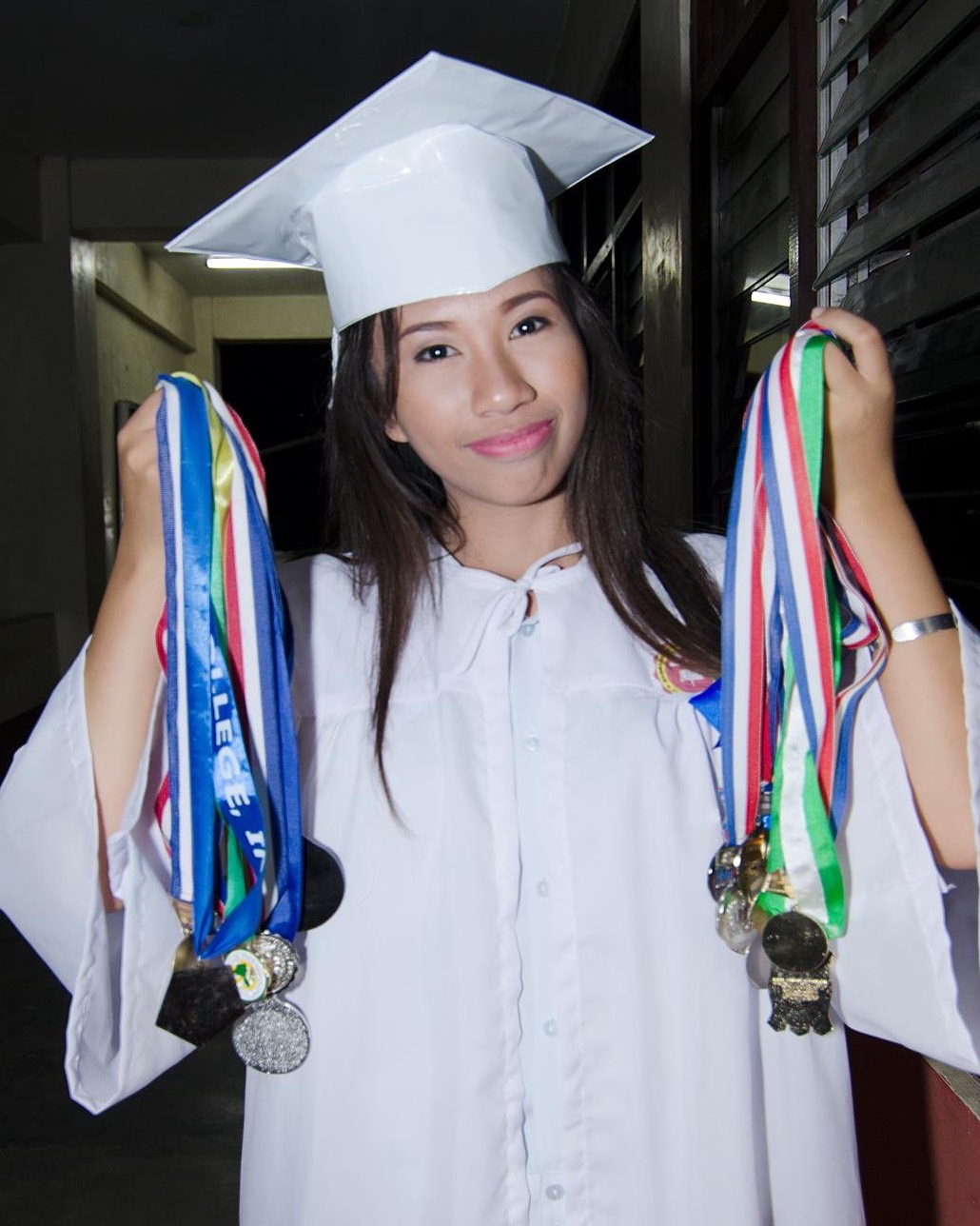 MANILA, Philippines – From urban Bayombong in the province of Nueva Vizcaya to a barrio surrounded by rice fields and mountains in Bambang, Zharina Nikko Casil got used to transferring from one home to another after her parents separated when she was 7-years old.

Having had to move back and forth from each of her parent’s houses, she also had to transfer schools, adapt to a new environment and build new relationships throughout her childhood.

“It came to a point when I had to choose whether to stay with my mother or father because I was struggling with having to adjust a lot in school,” Zharina says.

When she was in 2nd year high school, she chose to live with her great-grandmother from her mother’s side of the family to finish her studies in Bambang National High School.

Now 16, Zharina has another big move in her life; but she faces this one with excitement and hope.

Zharina hopes to study in United World College (UWC) Maastricht in the Netherlands, where she received a partial scholarship.

UWC is a global movement aiming to unite the youth from all over the world to be “champions of peace.” The UWC Maastricht in the Netherlands is one of its 14 colleges around the world. (READ about another UWC scholar who was once a street child)

Zharina first learned about UWC when the application was announced at her high school.

“I was interested. I said to myself, ‘I’ll try,'” Zharina recalls. 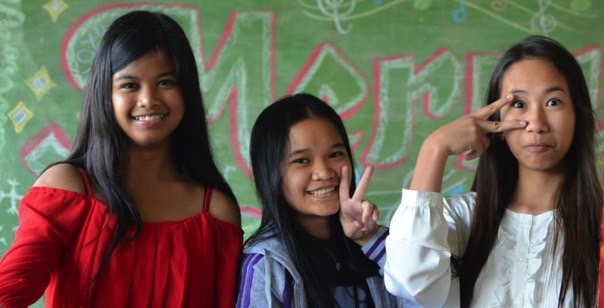 Zharina’s parents separated when she was still at the tender age of 7. It was quite difficult for her to fully wrap her head around her family’s situation at a very early age. Zharina has been under the care of her great-grandmother. It is not so easy living with an elderly person who also needs to be cared for and to be looked after at the same time. Because of this, Zharina taught herself to be strong and was deeply driven to becoming a more independent and self-sufficient person.

“I was trained and used to being self-reliant with many responsibilities,” Zharina says, “– to take good care of myself, my grandmother, to do household chores, and to be an excellent student at school as well.”

Her parents’ broken marriage and not being able to live with either of them did not stop Zharina from wanting to do more with her life and to excel in her studies as well. However, the storms of her life did not stop there.

Because of their financial difficulties, Zharina’s mother flew to Hong Kong and has been working as a domestic helper for 8 months now. As the sole breadwinner of her family, Zharina’s mother is working extremely hard and going through a fistful of challenges to provide for her needs. Zharina’s father on the other hand is currently unemployed. He’s serving some time at the Nueva Vizcaya Provincial Jail where he underwent rehabilitation. Zharina explains that her father has gone through severe emotional stress. (READ: From street kid to Atenean)

These experiences in her life made her into who she is today — reserved but friendly, independent and able to adjust to every situation.

Last March, she graduated salutatorian from Bambang National High School and brought home 17 awards, among which are Journalist of the Year, Researcher of the Year, Best in English, and Best in Investigatory Project, as well as numerous scholarship grants.

Although she admits that her dreams might be impossible to accomplish, she hopes to one day be a journalist or a broadcaster. She is currently in her first year in college, taking up journalism at Saint Mary’s University in Bayombong.

“I have a lot of dreams. I want to be a biologist, a model, an astronaut, and even a princess. But in reality I think that it’s hard. I just want to be able to support my parents, provide them meals three times a day, give them a livelihood of their own and a good life,” Zharina says. (READ: Street-smart math kids now shcolars)

Despite having the reality-bound and practical side to her, she remains optimistic and strong, never afraid to dream and take risks.

This was what made her apply for a United World College (UWC) scholarship.

Out of 45 applicants all over the Philippines, Zharina was one of the 16 young students selected for the national selection in Manila. This included a panel interview and an activity session with the other applicants.

During the interview, Zharina recalls having tears in her eyes as she shared all the sacrifices she went through to get to that point.

“I was nervous. My hands were shaking and I was catching my breath. But I remember, the panel said after the interview, ‘It was a good interview, thank you very much.’ I went out of the room happy because I was able to share all that I wanted to say,” she adds.

But she, however, did not expect to get a spot in any UWC country.

“Because I saw that each and every one of the applicants were super competitive. They all had the drive to get in,” she says.

It was to her great surprise that she received a call while she was competing in an essay writing contest. Zharina is one of the five UWC scholars of this year’s batch. The other four, one hailing from Batanes and the three from Manila, will be heading to Germany, Hong Kong, and Canada. Zharina got in at UWC Maastricht in the Netherlands with a scholarship that will cover only 75% of her tuition and living expenses. 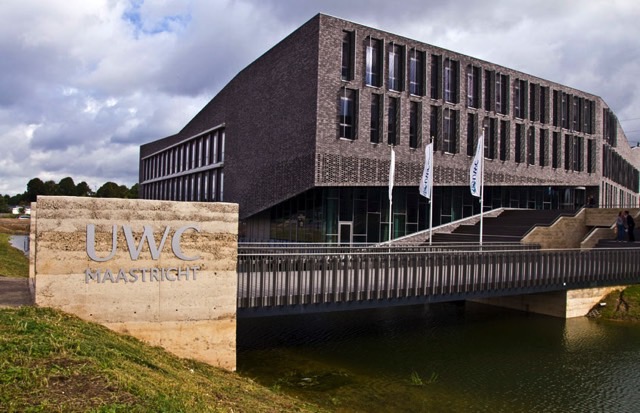 The full cost of attendance at the school for the two-year International Baccalaureate Diploma is 53,000 Euros. She will need to finance 13,250 Euros, equivalent to almost P670,000. This excludes airfare, estimated at P40,000 for a one-way ticket, and pocket money worth P24,500 for each year, as recommended by the college.

“I was so happy, but I was surprised with the expenses, especially with our family status. That would be hard to achieve since we don’t have a source for that big amount of money,” Zharina says.

She adds, “As I was going home, I saw an airplane and I said, ‘Wow, at last, I could ride an airplane!’ But I cried because it seems impossible.”

Zharina considers herself very blessed, especially with the simple life she has been given. Opportunities like this to study abroad motivate her to work hard.

After her education abroad, Zharina really wants to help those in need in whatever way she can.

“This is very important for me,” Zharina tells Rappler, “para makatulong sa ibang tao at para matupad ang hinahangad ko simula bata po ako.” (I can help other people and fulfill the dreams I’ve had ever since I was a child.)

Despite not being physically with her, both her parents are proud of her achievement and give their full support. Her mother, however, regrets not being able to support her financially.

“I said to myself that if I let this pass without doing anything, I would be at a loss. It’s as if I gave up on my dream. I thought of writing to government officials in our area to ask for support,” says Zharina.

Zharina also put up an Indiegogo Life account, as recommended by the UWC Philippines National Committee, to crowdfund for her financial needs for the first year. They are hoping to raise $8,383, equivalent to almost P380,000.

As of this writing, they were able to raise $3,650, equivalent to more or less P165,000. Nicole Severino, a representative of  UWC Philippines, said that most of the donations came from UWC alumni.

Zharina is thankful for all the people who are helping her reach her dreams. She says, “the hope that was eventually fading, now they are helping me to get it back. They make me realize that there is nothing wrong with trying as long as I give my full effort to achieve my goals.”

She hopes that more people could help her achieve her dream. If able to meet the financial requirements, Zharina would be heading to the UWC Maastricht this August.

“I’m a girl with big dreams,” Zharina says, “One of those is the dream that someday, I can be of great help to my fellow Filipino Citizens. In order to fulfill those dreams, I need to be prepared and capable of doing a great job as a student today.” (READ about another young boy’s big dreams: ‘I want to be a cop or a doctor’)

She gives credit to all the people that helped her throughout her life. She thanks her parents, her family, and her coaches, advisers, and teachers, especially those from Bambang National High School.

“I realized that the saying ‘Everything that happens in your life, there’s a purpose’ is true, and that it is God’s purpose. I realized that my hardships were actually lessons in life and a source of my strength.” – Rappler.com

If you would like to get in touch with her directly, Zharina can be contacted at zharina.nikko07@gmail.com or at +63 9354290835. You may also visit her online crowdfunding page.