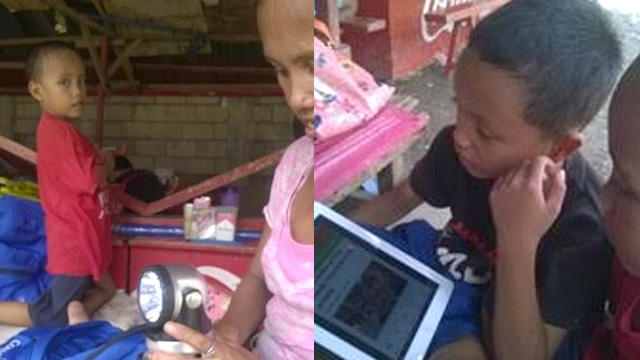 MANDAUE CITY, Philippines – Several anonymous donors provided what little help they can to the family of 9-year-old Daniel Cabrera, the boy pictured studying outside a fast food restaurant in Cebu because he had no light where he lived. (READ: Kid studying on Cebu sidewalk inspires netizens)

The assistance comes days after his image was posted on Facebook by a student of Cebu Doctors University; and two days after Rappler first located him on Thursday night at the same parking lot of McDonalds in Mandaue reclamation area. (READ more about Daniel Cabrera) 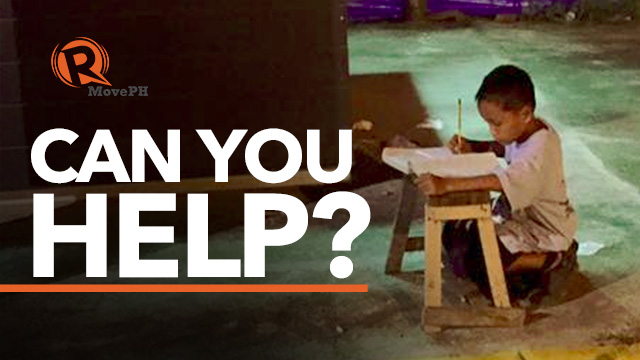 On Sunday, two policewomen from the Mandue City Police Office (MCPO) took Daniel on his first visit to the SM City mall in Cebu City. They gifted him with a toy police car after learning that Daniel wants to become a policeman or a doctor when he grows up. His younger brother Gabriel, 7, also got one.

(He was so happy and he even wanted a toy gun but I insisted not to buy it since he could hurt other children here and the policewomen also agreed.)

A group of call center agents from Convergys provided school bags and supplies to both kids. They also provided a rechargeable crank LED lamp to provided light. Another anonymous donor gave a second LED lamp. (READ: Can you help this kid who studies on Cebu sidewalk?)

Daniel’s story has clearly caught the attention of the public. The country’s large television networks flocked to the family to get interviews. Sunstar Cebu also featured on its frontpage Saturday the story of Daniel.

The boy was first located by Rappler on Thursday night with the help of Subangdaku barangay captain Ernie Manatad.

When Rappler caught up again with “Biboy” late morning of Sunday, he proudly showed his new toy police car.

Daniel was unfazed by the newfound fame.

“I will still study every night and play all day,” he said in Cebuano. Daniel also showed off his new school bag and plastic envelope filled with several school supplies.

The increased attention has brought some unintended consequences.

On Friday, GMA network toured the family around different places in Cebu away from their makeshift home in the Mandaue Reclamation Area to as far as the South Road Properties.

Christina later realized that she was taken away because the TV network did not want rival ABS-CBN to conduct their own interview with the child.

“Niingon ang kadtong taga GMA-7 na ate gusto nyo bang i-book kayo dun sa hotel. Sige na dun muna kayo sa hotel,” Maria Christina recalled GMA staff telling her when they learned that an ABS-CBN team was waiting at their home near McDonalds. (Someone from GMA-7 said: do you want to be billeted in the hotel? You can stay in the hotel for now.)

That time, Maria Christina said that she thought of several excuses so that they will be brought back home. She said: “kailangan ko na mag jingle kaya i-uwi nyo na kami.” (I need to use the toilet, so please bring me home.)

They were however not brought home immediately and were instead offered to eat at another restaurant and a convenience store where they are asked to pose and hug each other in front of a camera.

“Kanindot na ba gyud ilayat gawas sa ilahang van para maka ikyas na mi,” she added. (Maybe I need to jump out of the van so we can go back home.)

Relatives have since called asking money from her. “They thought I am already rich because I and Biboy are seen on TV,” lamented the mother.

“This is not making money for my child. It is about fulfilling his dream and giving him what he needs in his studies to fulfill that dream,” said Maria Christina in Cebuano, sending a message to her relatives in another barangay in Mandaue City. (WATCH: The young boy studies hard even with no light)

On Sunday afternoon, Maria Christina said that she would have gone to Santo Niño (Basilica) or at the St. Joseph Shrine in Mandaue City to offer candles and prayers and hear mass, but a team from the TV show “Maala-ala Mo Kaya” wanted to talk with her and her family.  – Rappler.com