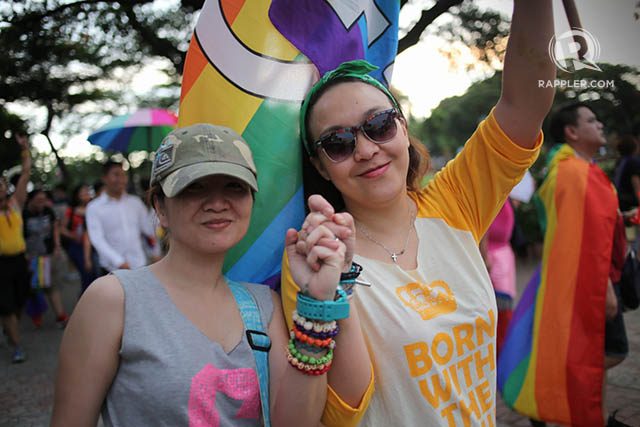 MANILA, Philippines – The Filipino Lesbian, Gay, Bisexual, Transgender and Queer (LGBTQ) community took to the streets on Saturday, June 27 in support of human rights and to rally against discrimination during the 21st Metro Manila Pride March.

Various LGBTQ organizations and individuals in colorful clothing assembled in front of the Lapu-Lapu Monument in Luneta Park. Around 1,400 people marched through Taft Avenue, Padre Faura Street, Roxas Boulevard and back to the park via Padre Burgos Avenue. 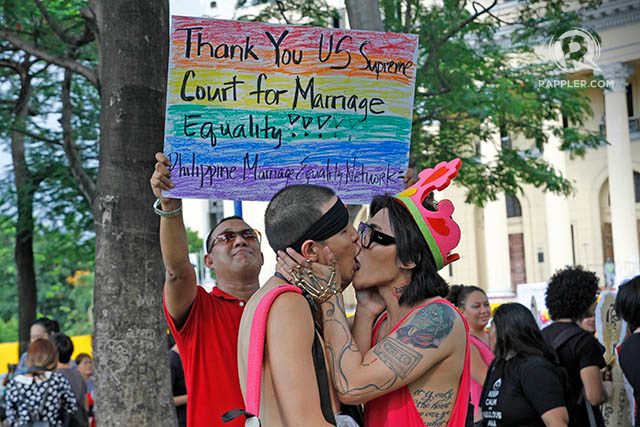 The Pride March is an annual community-driven event where LGBTQ organizations and individuals get together to celebrate love and equality of LGBTQs. This year’s march had the theme, “Fight For Love: Iba-Iba, Sama-Sama”. Task Force Pride, the march organizers, are proud of the march’s heritage as it was the first pride march held in Asia. (READ: LGBT rights are human rights)

What the LGBTQ community is fighting for is the government to provide for the equal treatment by law, particularly the legalization of same sex marriage.

However, some participants say the chances same sex marriage will be legalized in the Philippines is slim. Paulo Castro, who joined the march with his boyfriend, does not think that it is happening anytime soon. “We don’t even have (an) anti-discrimination law, which I think is what we should focus (on) first,” said Castro.

Marchers also adovcated for the rights of LGBTQ individuals who are more vulnerable to discrimination and prejudice. Castro named the recent incident at the Valkyrie Superclub as an example of the injustices done to the community.

“Though there’s a high tolerance for the LGBTQ community in the Philippines, the acceptance is not there. The Pride legacy is actually moving forward towards acceptance,” said Geoff Domingo from Task Force Pride. “If we are not going to fight for LGBT rights, it is saying that we are also not fighting for human rights. LGBT rights is human rights,” said Domingo. (READ: LGBT activists: “Recognize transgender rights in the Philippines now”)

The march is a part of 6-month long celebration of Pride Season, June being the Pride Month. The Pride Season aims to recognize the diversity of sexual orientation and gender identity. – Rappler.com

Soeui Lee is a Rappler intern and a student of the University of the Philippines – Diliman.