MANILA, Philippines – The youth sector will now have a bigger stake in ensuring their communities’ preparedness in the face of its vulnerability to disasters.

Dantes, who leads the youth commission’s efforts on DRR, said the event is an important milestone for the Filipino youth.

“The issuance of the JMC is a major step in our unwavering advocacy in ensuring that the youth’s effort in times of natural disasters…are recognized and are given due course,” Dantes said.

He added: “We believe disasters can be managed like any other problem. Disasters pose problems that are not impossible to overcome…by simply knowing and understanding hazards and the disasters, we will be able to effectively prepare.”

Power to the youth

Even before the JMC, some youth groups across the country have been heavily involved in their LGU’s disaster response efforts.

The most prominent examples are the Tanay Mountaineers of Rizal. (WATCH: Tanay LGU and civil society work for disaster preparedness)

Established in 1997, TM is a non-governmental organization (NGO) that focuses on DRR and environmental protection activities. What started as a hobby for its 20 founding members, eventually became Tanay town’s main disaster response arm. Typhoon Ondoy in 2009 became the deciding factor in TM’s current role in the LGU.

According to Dantes, the JMC will push more youth groups like TM to be involved in their communities DRR projects.

“Hence, we call on the youth to make optimum use of the governance opportunity accorded to the joint memorandum circular to show their capability to (lead) in the future…We young people should show our readiness to lessen the impacts of disasters,” Dantes said.

More work to be done

DILG Secretary Mar Roxas shared his excitement for the partnership, citing the key role young people have to play in DRR.

“I am delighted that the youth will be part of this initiative. The youth are stronger, more industrious, and more capable in responding to disasters. The end goal of this effort is to save more families and more people when the unexpected happens,” he said in Filipino. 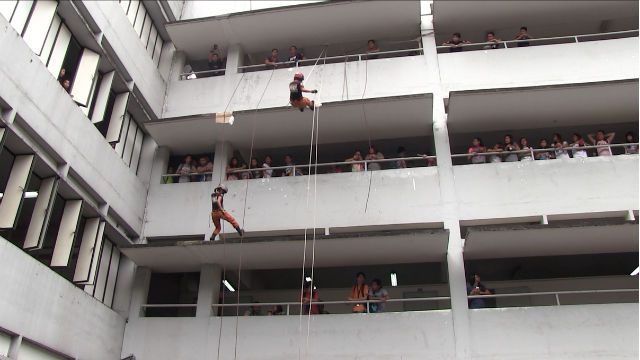 But there is more work to be done before young people are added to all LGUs’ disaster management councils. The NYC expects that there will be LGUs.

This is why the NYC, a policy coordinating body on youth development, is also pushing for this arrangement to be mandated by legislation, Dantes stressed.

In May 2015, NYC proposed amendments to Republic Act 10121, the law that created the National Disaster Risk Reduction and Management Council (NDRRMC). Aside from LGUs, NYC also wants to be represented in the NDRRMC.

During a Senate hearing on May 12, 2015, Dantes explained how young people help in disaster preparedness, response, and recovery efforts of the government and the private sector:

The Senate, on June 8, already approved on final reading the amendments to RA 10121. The RESCYouth Act was introduced by Senator Benigno Aquino IV, who also served as NYC Chairman from 2003 to 2006.

Now that the Senate bill is approved, only the version from the House of Representatives is needed for LGUs to be mandated by law to add youth representatives to its disaster councils. House Speaker Sonny Belmonte earlier promised to support the passage of the law. 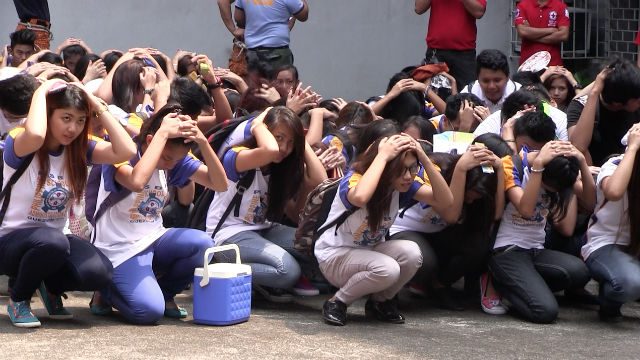 As the 2 agencies promised support for the bill, Dantes challenged the youth to participate in DRR initiatives.

“One way to show that we are worth it is to actively participate in the upcoming Metro Manila-wide earthquake drill. This will provide an opportunity for the youth to show their abilities and readiness in DRRM,” Dantes said.

The JMC signing was held in the Philippine School for Business Administration (PSBA) in Quezon City, which in itself is located near the West Valley Fault. (READ: Schools, hospitals near West Valley Fault)

The school organized an earthquake evacuation drill before the program started to show their readiness for such calamity.

“This in itself shows the challenge we face from nature. But we know that we can be prepared because of this partnership that will put the youth at the center of disaster preparedness,” Roxas said.

With Wednesday’s agreement between NYC and DILG, the pressure now shifts to LGUs. Will they implement the agreement? – Rappler.com

Is your provincial, municipal, or city government following the joint memorandum circular? Tell us at move.ph@rappler.com!

The NYC is a partner of Project Agos, which is operated by Rappler’s civic engagement arm MovePH. Project Agos is an online collaborative platform that combines technology, journalism, social media, and crowdsourcing in helping build communities that are resilient to disasters and the impact of climate change.