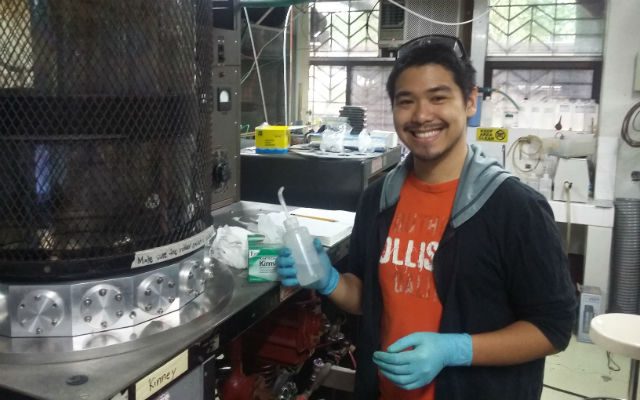 MANILA, Philippines – When Ateneo student Anton Tanquintic was on his internship at the Philippine Nuclear Research Institute, he saw a poster promoting a competition. Wanting to exceed his comfort zone, the Applied Physics and Materials Science and Engineering student in the Ateneo de Manila University, joined the competition with no expectations. His leap of faith may now send him as the lone Filipino finalist to the International Atomic Energy Agency (IAEA) headquarters in Vienna, Austria on September 2015.

The competition is the World Nuclear University’s (WNU) Nuclear Olympiad 2015, a 4-year-old international challenge for undergraduate and graduate students of universities. According to its website, WNU is a “worldwide network of educational and research institutions engaged in peaceful uses of nuclear energy.”

Tanquintic likes to see himself as a serious scientist who acknowledges the importance of awareness and appreciation of science and technology by the public. Beyond winning the competition, he said his goal is to educate the public that nuclear technology is “safe and beneficial.”

The competition’s challenge this year tackles nuclear techniques for global development. For the first stage of the Olympiad, applicants were tasked to post a short video on the topic on YouTube.

Tanquintic is now on the second stage of the competition where the jury selected top 10 videos based on their impact, relevance, and creativity. His video, “Nuclear Solutions for Today’s Needs,” already has 615 likes as of 5pm, July 2, making it the 4th most-liked video in the competition.

The 5 participants with the most liked videos will qualify for the final stage of the competition, a presentation of a paper on the production of radioisotopes before the jury in the IAEA headquarters.

The 59-second video features digitally drawn animations on daily applications of nuclear energy. There is a voice-over detailing these benefits in the fields of medicine, industry, and food production.

Tanquintic said that the biggest challenge in the competition was making the video itself.

“As somebody immersed in the sciences, a large part of my skill set primarily lies in the design and conduction of experiments, and the abstraction of thought,” he said in an email interview.

He added: “I may be lucky to have the ability to articulate and communicate well (especially with the public), but I still lacked the know-how to implement any ideas – I suck at drawing, and until recently I did not know how to edit videos.”

He thus sought the help of his sister, Antoinette, a high school student whose dream is to become a microbiologist or neurosurgeon. She translated a script he made into an “easily digestible cartoon.”

Being understandable and accessible were his main goals in creating his video. According to him, the problem with many, particularly older scientists, is the failure in “articulating understandable points well to the public.”

“Typically, people won’t bother to watch plain and boring text, especially when it comes to something uberly technical and highfalutin,” he said.

The style of his video, inspired by YouTube channels such as Minute Physics and comics in xkcd.com, “makes things digestible and enjoyable to watch while still being educational.”

Fighting the stigma against nuclear energy

Tanquintic sees this stigma as a shame.

“My opinion – which I would like to emphasize is an informed and educated opinion and not merely one based on fear or little learning – is that nuclear technology can be very safely managed and used for peaceful purposes,” he said, pointing out that his video presents how the world already benefits from its applications today.

Modern technology, he said, has also allowed for the safer usage of radioactive substances.

“Yes, Chernobyl and Fukushima happened, but it is still undeniable that many developed countries around the world avail of nuclear power and remain unscathed precisely because they take the proper measures in keeping it all safe – we can do that too,” he said.

He believes that public acceptance will lead to both an increased support for science and technology research not just in nuclear science and a more supportive legislation that may change the constitutional ban on nuclear power one day.

Tanquintic, a DOST merit scholar who will graduate in July sees the need to nurture younger scientists in all fields.

“We really need more people investing in science and technology in the country,” he said.

“Nuclear technology is just one field that can help solve some of the problems that ail us today; many other fields can do the same that need more manpower.”

According to Tanquintic, competitions such as the Nuclear Olympiad hold long-term benefits becasuse they make discussions and solutions possible. They also give aspiring scientists, particularly those from developing countries, a chance to learn more.

“I’m just one young scientist hoping to make a difference for the Philippines. Imagine what it would be like if you had more than a thousand aspiring Filipino scientists taking advantage of opportunities in various fields abroad and then coming back to improve the country’s situation,” he said.

Should he make it to Vienna for the final round of the Nuclear Olympiad, Tanquintic is looking forward to meeting people and absorbing as much knowledge as he can.

He also hopes to visit a friend, go backpacking, and get lost in Vienna as he personally settles “the question of whether Vienna sausages do indeed taste like the sausages from Vienna.” – Rappler.com

Anton and Antoinette Tanquintic’s contest entry may be accessed here. WNU will verify the number of likes of all ten videos by July 9, 2015, 17:00 UTC (1:00 AM of July 10 in Philippine time). You can help his campaign by voting the like button

Frances Sayson is a Rappler intern.