The Nepal earthquake and its economic, poverty impacts Facebook Twitter Copy URL
Copied
Two months after the earthquake which devastated Nepal, how is the economic recovery going for survivors?

Two months after the catastrophic 7.8 magnitude earthquake struck Nepal on April 25, the government and development partners including the Asian Development Bank (ADB) are now publishing the definitive report on the tremor’s impact.

The executive summary and volume A of the Post Disaster Needs Assessment (PDNA) is already out, and we are still awaiting volume B. Information from the full set of reports, including a part of the aid pledged during the reconstruction conference, will feed into the government’s budget for next year expected to be announced by July 15.

The PDNA says the earthquake lowered GDP growth by over 1.5 percentage points from an estimate of 4.6% in a no-earthquake scenario in fiscal year 2015 (which ends July 15, 2015). This new estimate is in line with the lower growth forecast we mentioned in our blog post on May 22. 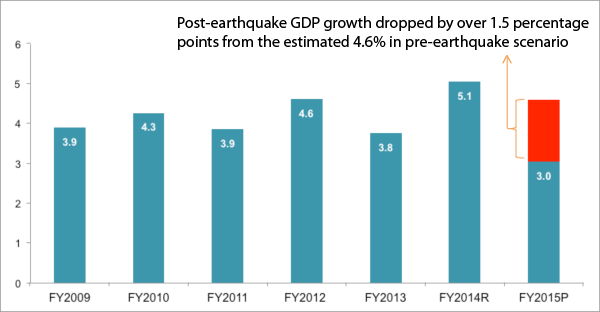 Although the earthquake struck Nepal in the 10th month of fiscal year 2015, the impact on GDP growth is sizable especially on the services sector, which is now expected to grow by 3.9% compared to 6% in a no-earthquake scenario. Wholesale and retail trade, tourism (including air transport, and hotel and restaurant businesses), real estate, renting and business activities, and education sub-sectors are the most affected.

The agriculture sector is expected to grow by 1.9% and industry by 2.7%, down from earlier no-earthquake scenario forecasts of 3% and 3.5%, respectively. The sharp drop in agricultural output is primarily due to the negative impact of delayed and weak monsoon in the first half of the fiscal year 2015, and later the loss of livestock due to the earthquake.

Nepal’s GDP is estimated to be $21.6 billion in FY 2015 ($371 million less than what would have been in a no-earthquake scenario). The loss amounts to 1.5% of GDP. About 62% of the total gross value added (GVA) loss is accounted for by the services sector.

Impact on per capita income, poverty The PDNA estimates per capita income will decrease by $23 to $762 in FY 2015 compared to the no-earthquake scenario of $785. Real per capita income, which takes inflation into account, is forecast to increase by just 0.6% against 3.6% had there been no earthquake.

About 50-70% of the additional poor live in the rural central hills and mountains, where the vulnerability prior to the earthquake was already high.

The income shock will largely be felt though the loss of income-generating opportunities and livelihoods including death and injuries to primary wage earners and the loss of housing, productive assets like seeds, livestock, and farm equipment, and of durable assets such as assorted household items.

Beyond this monetary-based poverty estimate, a larger impact can be expected when factoring in multidimensional poverty, which includes additional factors such as water and sanitation services, disruption of schools and health services and the possibility of an uptick in food insecurity.

The poor and vulnerable are particularly dependent on local infrastructure such as roads, bridges, health posts, and schools for access to labor and commodity markets, and for accumulation of human capital (especially those of children).

Reviving local economic activities and the resumption of basic public services along with an accelerated implementation of reconstruction projects will be critical to make up for the set back on poverty reduction caused by the earthquake. – Rappler.com

Chandan Sapkota is the Economic Officer of the ADB Nepal Resident Mission. He was a former consultant for the Government of Nepal, GIZ, UNDP and FAO. Sapkota previously worked as a researcher at South Asia Watch on Trade, Economics and Environment in Kathmandu, and was a junior fellow at the Carnegie Endowment for International Peace in Washington, DC.

This blog was originally published here.