Two women in love: From Pampanga to Manila and back Facebook Twitter Copy URL
Copied
An office romance brings two women to two cities. They end up at the altar.

MANILA, Philippines — She fell in love with a woman 6 years her junior.

Dawn Mejica swore their love was magic. Like most love stories, theirs began with a pinch of luck as Dawn was transferred from her Manila office to a Pampanga branch. She reluctantly moved.

She worked in an online English learning center. In 2011, her company took in a batch of nursing graduates; most of them were biding their time while waiting for the licensure exams. Dawn’s job was to show them the ropes.

One of the applicants was Jed Avenir, a 21-year-old girl fresh out of college. Jed is a peculiar name for a girl, Dawn thought.

As team leader, Dawn wanted her trainees to feel at ease. She befriended everyone, including the shy and elusive Jed.

“Parang naiilang siya sa akin (She seemed uneasy with me),” Dawn recalled. The tension, however, was slowly sliced by a riff of humor between the two women, especially when Dawn had to train Jed on how to speak confidently in front of a webcam.

The girl’s shyness was soon gone. The two became friends, yet maintained a professional distance, except during lunch breaks. (READ: Two men in love, finding him via FB and God)

One day over lunch, Dawn flat out asked Jed, “Are you straight or what?” The girl let out a soft “no,” which Dawn followed with a quick pat.

“Don’t worry, that’s nothing to me,” Dawn said, adding an anecdote about her cousins in same-sex relationships, but omitting the part about her own affairs with women.

The two smiled and finished their meals.

Weeks later, sticky notes mushroomed on Dawn’s desk. They read like mundane reminders left by a mother for her child: “Don’t forget to take a break. Take care. Eat well.”

Dawn normally throws clutter away, but she kept Jed’s notes. She found them sweet, yet left her wondering. Does she have a crush on me? Dawn flushed, embarrassed for acting like a teenager.

Later on, the notes were accompanied by snacks. Then, a bucket of chicken.

“It’s unforgettable. She left a bucket of chicken along the office aisle where everyone could see it,” Dawn recalled.

It came with flowers and a bright sticky note. Soon after, Jed asked Dawn out.

Although stationed in Pampanga, Dawn still went home to Manila everyday by bus. Jed would always insist on accompanying her home. Dawn refused because Jed would have to take a trip from Pampanga to Manila and back for about 4 to 6 hours.

But Jed was persistent.

Dawn has always been open about her relationships with her family. In fact, she already told her mother about her younger flame.

“If she’s kind, if she’s okay for you, I have no objections with your relationship,” her mother said.

“As long as you don’t walk over others, you shouldn’t be ashamed of who you are or what you have,” her mother continued.

Jed then called Dawn’s mother, asking her to reassure her daughter of her blessing. The gesture reduced Dawn to silence. After dinner, the two went to a café. The birthday girl frowned all night while Dawn busied herself folding napkins.

Look, said Dawn. She folded tissues to form the words “I love you.”

All the things we’re not

In May 2013, the two women married through a Holy Union at the Metropolitan Community Church in Quezon City (MCC-QC).

After medical school, Jed hopes to have children with Dawn through artificial insemination. Under Philippine laws, same-sex couples cannot jointly adopt children; they can only do so individually.

Some people view couples like them as sinners. Others call their love a phase, a confusion, a perversion, a disease, a mistake. They are none of these things, according to Dawn and Jed. 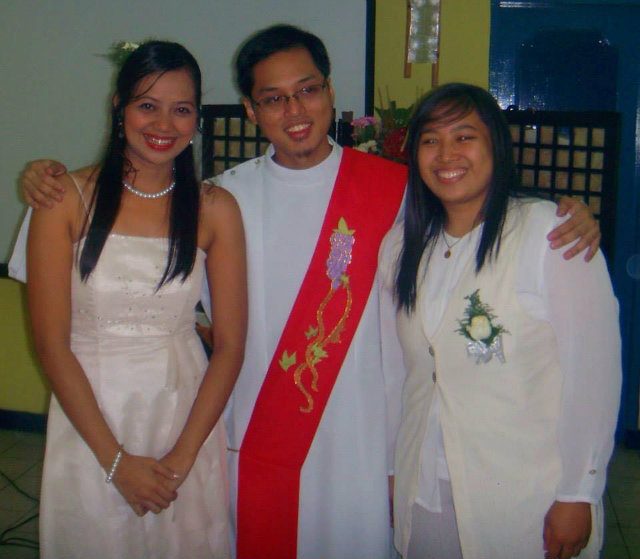 Since Jed and Dawn’s Holy Union has no legal recognition, they cannot avail of the same benefits as married couples, such as social security, healthcare, tax exemptions, and insurance.

“We’ve already accepted that we can’t do anything, that’s what the Philippine government wants,” said Dawn.

“As much as possible, it’s better to incorporate equality rights in government benefits. We should have the same benefits as other people,” she continued.

As of July 2015, there are only 22 countries that allow same-sex marriage, the Pew Research Center reported. Greenland, Finland, and the US were the latest to approve marriage equality laws nationwide. The Philippines is still debating on the issue.

Jed and Dawn do not label themselves lesbian, bisexual, or anything else. For them, they are just two people in love.

Love, they say, is their only label. – Rappler.com

Got stories to tell? Share your ideas and articles on women, gender, and development with move.ph@rappler.com. Speak up on #GenderIssues.