Facebook Twitter Copy URL
Copied
Some members of the Chinese-Filipino and Binondo community are, however, unhappy with the newly-inaugurated Chinatown arch

MANILA, Philippines – The world’s largest Chinatown arch was inaugurated on Tuesday, June 23, by Manila Mayor Joseph Estrada after more than 3 months of construction.

Crowds gathered at the foot of Jones Bridge to attend the ceremonial opening of the new arch, in time for Manila Day on June 24.

The new arch was earlier described by architect Saul Simon Tan as a fusion of modern and traditional designs with 3 pagodas.

According to Bernardito Ang, Vice Chairman of the Manila Chinatown Development Council and District III Councilor, the arch is largest in the world in terms of overall dimensions.

It stands 63.8 feet high and 74 feet wide, taller than Washington’s 60-foot Chinese friendship arch which was previously the world’s largest.

“The new arch serves as the initial phase of the development of Chinatown,” said Ferdie Ramos, consultant for media affairs at the mayor’s office. “It is one of the priority projects of Mayor Estrada to rehabilitate Chinatown.”

The Jones Bridge and MacArthur Bridge were also repainted as part of the Chinatown makeover.

Ramos said it is Estrada’s desire that this arch would help Filipino-Chinese relations amid disputes over the South China Sea or West Philippine Sea as well.

The arch cost P28 million to construct and was funded by China Energy Fund Committee (CEFC), said Luis Santarin, a local legislative officer at the mayor’s office. The CEFC is a non-profit, non-governmental think tank involved in public diplomacy. 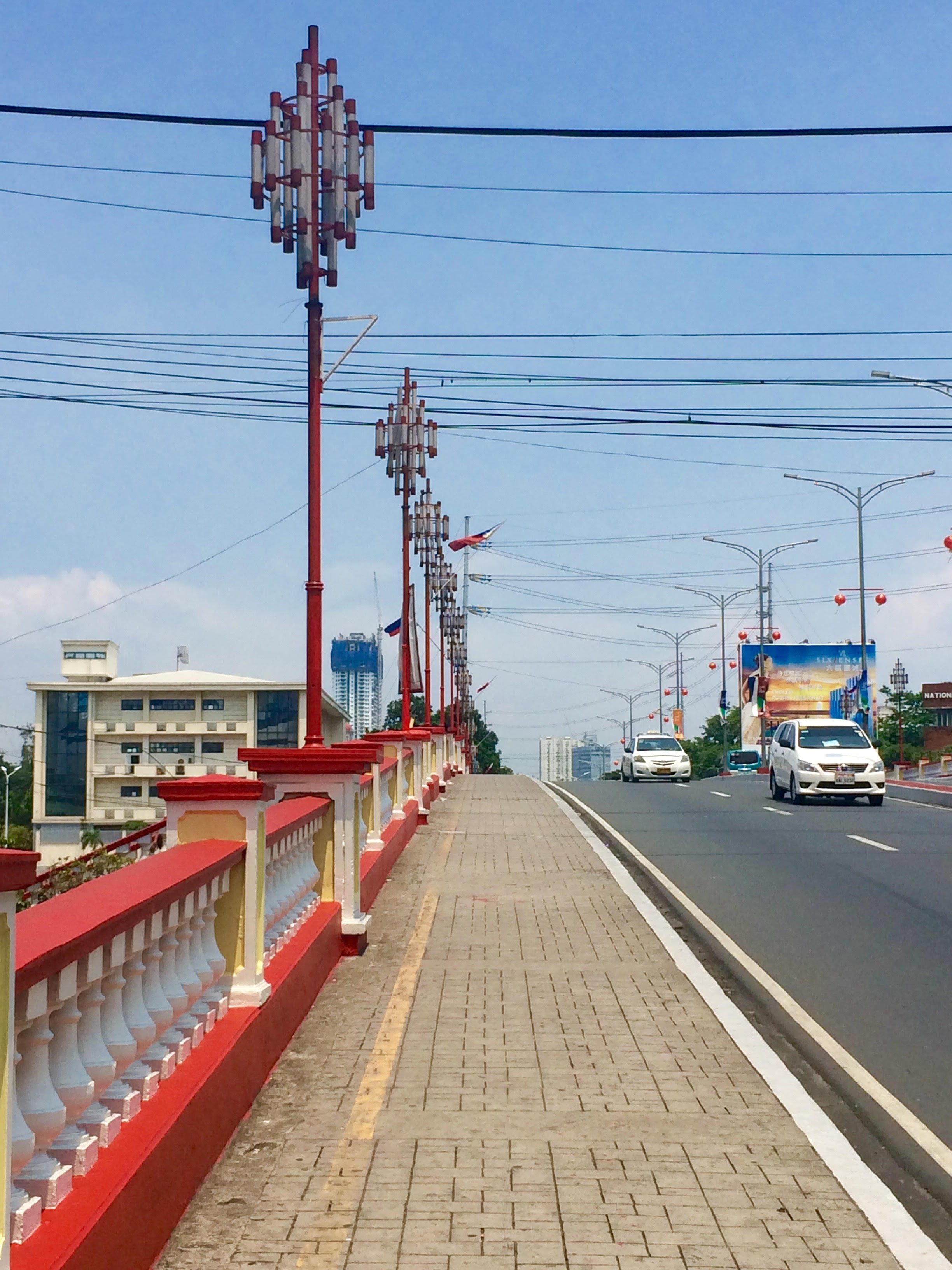 The new arch is an entry point and gateway to Binondo, Santarin said. It acts as a dividing border between two districts and is not meant to be a new friendship arch.

Ramos added the arch was specifically built at the foot of Jones Bridge to include Escolta in the entrance of Chinatown.

Although it is located in front of the old arch, the new arch was not meant to obstruct the old one, Santarin told Rappler.

Following the new arch, the old buildings in Chinatown will be refurbished and restored, but with an ordinance so as not to demolish or change their structure, Ramos said.

Not a mirror of Binondo’s history

Some members of the Chinese-Filipino community were dissatisfied with the new arch.

Meah Ang See, director of the Bahay Tsinoy Museum, said the arch does not reflect the history of Binondo and the blending of Filipino and Chinese cultures the city embodies.

With 400 years of history behind it, Binondo is the oldest Chinatown in the world, its beginnings go as far back as the early decades of the Spanish colonial period.

The town was created by the Spaniards in 1594 as a permanent settlement for Chinese immigrants. The Chinese brought with them a new culture and over time, Binondo became a melting pot of Chinese and Filipino influences that have helped define the place.

See said she feels like a tourist when she sees the new arch.

See said the old arch, which reads, “Filipino-Chinese Friendship Arch,” commemorates a big part of the rich history the Chinese have with Binondo, while the new one doesn’t signify anything.

Ivan Man Dy of Old Manila Walks said the Chinese characters written on the new arch literally translate to “Chinatown”, implying that Binondo is an outpost of China.

“We want Binondo to be recognized for its ethnicity as opposed to being a mainland Chinese outpost,” he told Coconuts Manila. “It is not within our Tsinoy sensibility to build that arch because we see Binondo as a history district, not as a mainland Chinese city.”

However, See admitted that the new arch looks nice.

“It’s very clean and it’s very, very pretty,” See said. “Quite grand. It just doesn’t feel like the Binondo that I grew up with.”

The lack of connection with Binondo’s Chinese-Filipino roots was not the only reason people were unhappy with the new arch.

“I don’t like that they have to build a new one because it causes a lot of traffic,” said Nene Santos, who works in Binondo.

Early April, the Manila Traffic Bureau implemented a traffic rerouting scheme to accommodate the construction of the new arch. Vehicles planning to pass through Jones Bridge had to turn right to Escolta instead of going straight ahead.

Santos also added she thought the new arch was unnecessary.

“The old one was okay, they could’ve just renovated it,” she said. “Dapat hindi na. Gastos lang iyan.” (They shouldn’t have built it. It’s just expense.)

Manuel Salilid, another Binondo worker, said he didn’t like the positioning of the new arch.

“Ang ayaw ng marami ay sagabal yung poste,” he said. “Mukhang accident-prone kasi parang nakakabangga.” (What people don’t like is that the post is an obstruction. It looks it will cause a lot of accidents because it seems easy to hit it.)

Plans to refurbish Binondo were announced by Estrada early 2014 in hopes that a renovated Chinatown will attract more tourists and increase business in the area. – Rappler.com