When I get mistaken for a nanny

Jul 10, 2015 6:30 PM PHT
Anne Quintos
Facebook Twitter Copy URL
Copied
'The labels I get from random people aren't really mine to bear. I wouldn't know how they see the world and that should not bother me as well.' The mirror showed me a different person. As I carefully stared at her, I see no resemblance of the woman I’m very much comfortable with. She narrowed her eyes at me, looking refined and perhaps more slender than I was.

From time to time, I wear dresses. But my heart keeps coming back to my usual jeans and shirt get-up. That morning, however, when I started to analyze how I look, there was a feeling of resentment from having to try to be a little bit upscale. I breathed in to gather my strength and admit to myself why. 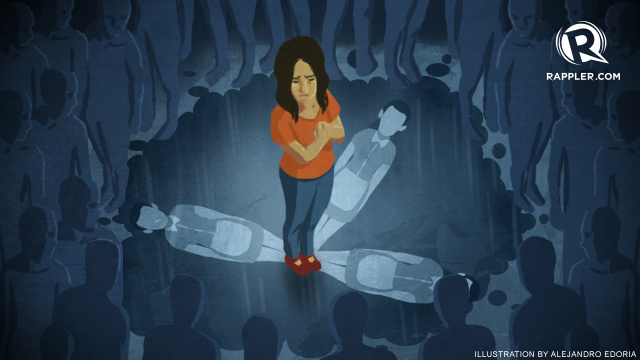 An old Chinese lady held the elevator door for me and my daughter to get in, and then asked for our floor. I politely said “27, please,” while my two-year-old daughter offered her the cookie she was holding.

She smiled back and asked me if I speak Chinese. “Oh a little bit,” I answered and she comforted me by saying my Chinese will get better if I practice more. She was such a nice lady and her smile reminded me of my grandmother back in the Philippines.

Our small talk ended once we reached our floor. She gestured goodbye, nodded her head and said, “Tell the parents of this baby, they have a very cute kid.” It was a quick goodbye and yet I felt like the awkwardness lasted for a couple of minutes. There I was, offended, but I tried to keep my smile plastered on my face until the elevator door shut.

Upon seeing my reflection on the shiny piece of metal in front of me, I understood what she thought: I’m supposed to be the nanny.

It may be because of my dark and big eyes, my light brown skin, or my round nose that I always get stereotypes like this from random locals in Taiwan.

After 5 years of living in a foreign country, I taught myself that this shouldn’t bother me. Being a nanny is a decent job. Working in a factory is not a problem. Being married to a Taiwanese shouldn’t be a bad thing. I’ve been called all these 3 at one point or another, but there’s a big problem. I’m not any of these 3. So I just let these assumptions pass from one ear to another.

I learned to just smile back like a good stranger who’s oblivious to a new environment. Like I said, it didn’t matter to me.

The remark from the old lady pierced me, though. Perhaps, ways deeper that it had me consider “rebranding” myself so as not to be hastily labeled again. I’ve thought hard about it and asked why I was offended. I could have been offended when a police officer pulled out from his car, as I was walking to the bus stop a few years ago, and asked for my resident card for no other reason but to verify that I’m not an illegal alien.

I could have been offended when an immigration officer from the Philippines rudely assumed that as a foreign spouse I should carry my proper documentation to avoid further questioning. I was scared of these instances, of course, even if I did nothing wrong. Nonetheless, I wasn’t really offended.

Then, I understood one thing, when the old lady blurted her implied assumption about who I was and what I do, I was in a small metal box with my daughter.

My daughter who will eventually learn that colors aren’t as simple as the ones she can identify in her children’s books. I was offended, not by the old lady who probably didn’t mean anything bad, but by the thought that, sooner or later, I will be labeled in front of my daughter’s young and inquisitive eyes as she begins to understand the complexities of the world.

That, to me, mattered. A whole heck of a lot.

But ethnic stereotypes, racial discrimination, and racism happen all the time, all over the world, and to many different races. It’s a long-standing nastiness that many people deal with. At times, the casualty can be devastating.

Here’s another problem about judging people based on race and social status: It doesn’t end with the offender. Soon enough, the pain and embarrassment of discrimination grow within the victims and often lead generalization of the other race. Generalization then gives birth to the new but familiar stereotypes and discrimination.

So it becomes a nasty cycle where no one really comes out different. It’s a cycle that will continue to limit, paralyze, and exclude us from wonderful opportunities that are only brought about through diversity.

After my unforgettable elevator ride, I felt so limited, not because I was labeled to a profession, but because I was contained as a person, as if she knew that the highest point I could reach was the 27th floor of our condominium.

The labels I get from random people aren’t really mine to bear. I wouldn’t know how they see the world and that should not bother me as well.

Still, I know a lot of things. I know that I have been helped by a lot of locals, expats, and migrants here in Taiwan, so that I could survive and thrive as an overseas Filipino. I know that becoming a Filipino doesn’t stop me from achieving my dreams and ambitions.

I know that I come from a race of survivors, fighters, and dreamers. I also know that I’m strong to crush stereotypes and discrimination that are thrown my way. Even if I get beaten down, I know that I can prove to everyone that I’ll go on.

Someday, when my daughter grows up and asks about complicated things like prejudices, racial stereotypes, and whatnot, I will tell her only these that I know because those are the things that matter.

Well maybe, I’ll add a little bit more – she should know that her mommy can rock pretty dresses that fit her, without the need to fit in. – Rappler.com

Based in Taiwan for the last 5 years, Anne Quintos advocates for the personal empowerment of overseas Filipinos. She is the author of Abroad Me: 22 Success Strategies for Young Overseas Filipinos (PageJump, 2014), which is available in National Bookstore, PowerBooks, and Fully Booked, as well as in Amazon.com. She also blogs at, and engages readers of her book with seminars and online events.