MANILA, Philippines – The first step to a healthy lifestyle begins with informed choices.

This is why this year’s Nutrition Month is focused on how to solve the growing problem of obesity in the Philippines. (READ: Too little, too much: The problem with double burden malnutrition)

The latest National Nutrition Survey showed that one out of 3 Filipino adults are obese, with obesity prevalence among them at 31%. The survey also revealed that females aged 40 to 49 who belong to the wealthier sector in urban areas are more likely to suffer from obesity. (READ: What’s the nutritional status of Filipinos?)

It is also alarming that there are still Filipinos who still have some misguided notions about obesity. MYTH #1: I am obese when I am overweight.

BUSTED: Being overweight and being obese are two different things, but they both mean a person has excess body fat. The difference, however, lies in the amount of fat.

According to Calangi, a person may determine if he or she is overweight or obese through the Body Mass Index (BMI), which indicates the right proportions for a person’s weight and height. 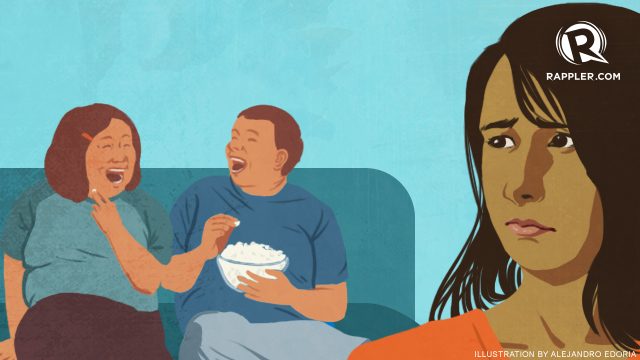 MYTH #2: I have relatives who are overweight and obese, so I’ll be overweight or obese too. It’s in our genes!

BUSTED: While studies show that genes do contribute to one’s weight gain, Calangi said they cannot be solely blamed for overnutrition. The unhealthy habits or lifestyle of one’s parents or relatives are more likely the cause.

It is thus important that parents teach their children the value of having a healthy lifestyle early on at home. (READ: Preventing obesity at home, community, and school) MYTH #3: I should not be worried because these are just “baby fats.”

BUSTED: According to Calangi, Filipinos should be more vigilant of the so-called “baby fats.”

“‘Di naman magically magdi-disappear ‘yung fat sa bata,” she said, adding that the tendency of children to engage in physical activities, like sports, also contributes to the weight loss as he or she grows up. (A child’s fat doesn’t just magically disappear.)

However, Calangi emphasized that a child will not easily outgrow his or her overweight or obesity, especially if this already occurred during his or her development years. (READ: Obesity among US kids starts early: study)

“This is where the importance of the first 1,000 days comes… Your lifestyle and nutrition investment as a child will greatly determine your health as an adult,” Calangi said in a mix of English and Filipino.

The first 1,000 days of life, from pregnancy up to a child’s 2nd birthday, influence the direction of a child’s health and well-being.

Lack of proper nutrition during this crucial period can have irreversible effects on children, including their physical and mental development as well as their education and employment prospects. (READ: Poe: First 1,000 days crucial for child’s development) MYTH #4: I’m overweight or obese because I have a slow metabolism.

BUSTED: Metabolism involves the chemical processes occurring in a living organism to maintain life. The basal metabolic rate, according to Calangi, involves the number of calories a person uses up to keep vital functions, like breathing and blinking, going.

A person’s body size and composition, sex, and age influence his or her metabolic rate. Calangi said that a person who weighs more, or who has more muscle mass will need to burn more calories, even at rest. This means that overweight and obese people actually tend to have a faster metabolic rate.

“Kasi siyempre mas kailangan ng energy [for example] to breathe,” the nutritionist-dietitian said. (Because they would need more energy to breathe, for example.) MYTH #5: Overweight and obese people need to have a more intense workout program than others.

BUSTED: Calangi said this is wrong, as the exercise intensity level should depend on how fit a person is.

She said that changes in type of exercise and intensity level, especially for overweight and obese people, should be gradual. They may begin with simple cardio exercises, like walking on the street, for 30 minutes a day, 3 to 5 times a week.  Once they get used to this routine and become stronger physically and mentally, then it’s time to increase the difficulty level. MYTH #6: If I stop eating rice, I won’t be overweight or obese anymore.

According to Calangi, the key to fighting overweight and obesity effectively is putting an effort into consciously eating and living healthy – and to keep on doing so every day. – Rappler.com