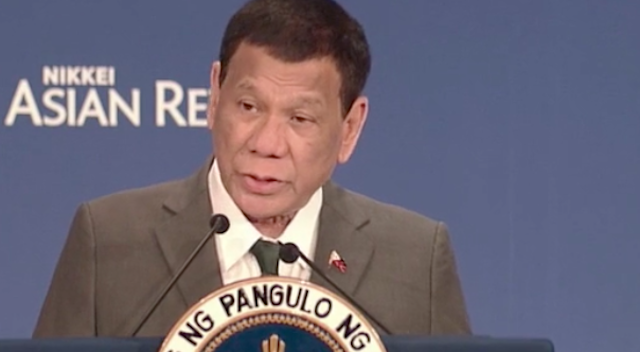 “I said to the body, let’s stop kidding each other or else we are just wasting the time and the money of the people coming back and forth from these conferences which has not improved a bit since we started to talk about it,” Duterte said on Friday, May 31, during his speech at the Nikkei International Conference on the Future of Asia in Tokyo.

“I said, ‘What have we done from the first meeting to the last? None,'” he added.

Duterte was recalling a time when, during a meeting presided over by UN secretary-general Antonio Guterres, he had supposedly reacted to the UN leader’s remarks about climate change.

He had supposedly told Guterres about how the Philippines has experienced typhoons due to climate change and how he fired a “Cabinet member” for attending “20” climate change conferences.

Duterte fired Presidential Commission for the Urban Poor chief Terry Ridon for supposedly attending some 7 conferences abroad, which Malacañang had described as “junkets.” Ridon countered that he served with integrity and competence.

He floated the possibility of the Philippines not attending the next conference, set to take place in Bonn, Germany in June.

“Again this year, there’s another conference on climate change. Then I pose this question, maybe we will attend, maybe we will not. America has not signed that treaty, China got out of it. I don’t think Russia is happy with its membership there,” Duterte said.

But while US President Donald Trump did pull his country out of the historic Paris climate agreement, China has stayed.

Duterte repeated his old beef with the climate deal, saying it is ineffective because no entity enforces any sanctions on countries that fail to meet obligations.

“What ails the system now? What is this conference on climate change for? Is it not just talk? Because there is nobody, no entity to enforce the laws governing climate. There is not even a sanction,” said the Philippine President.

He even described climate change scientists as “noisy.”

In March 2017, Duterte signed the Paris climate deal despite his misigivings about it, because a majority of his Cabinet voted to sign it.

The annual UN climate conferences, also known as Conference of Parties, have grown to become one of the largest international gatherings in the world.

They are attended by government officials, scientists, and civil society groups. These conferences are venues where countries who signed various climate change deals discuss the implementation status of the deals.

The most important of these, the Paris Agreement, aims to keep global warming “well below” 2 degrees Celsius (3.6 degrees Fahrenheit) over pre-Industrial Revolution levels, and to strive for a limit of 1.5ºC.

Failure to do so could mean catastrophic floods, storms, drought, and ocean-level increases within the next 50 years.

To accomplish these, countries who signed the pact promised to keep their emissions below certain levels and provide assistance to countries suffering from climate-induced disasters.

Duterte, in his prepared speech, called for “real action” from developed countries.

“The Philippines joined the global consensus to fight climate change. We hope that this consensus would hold and real action be undertaken especially by those most responsible for this monumental problem. Government must comply with obligations beyond our constituency…. There has to be an accountability,” he said before going off-script. – Rappler.com