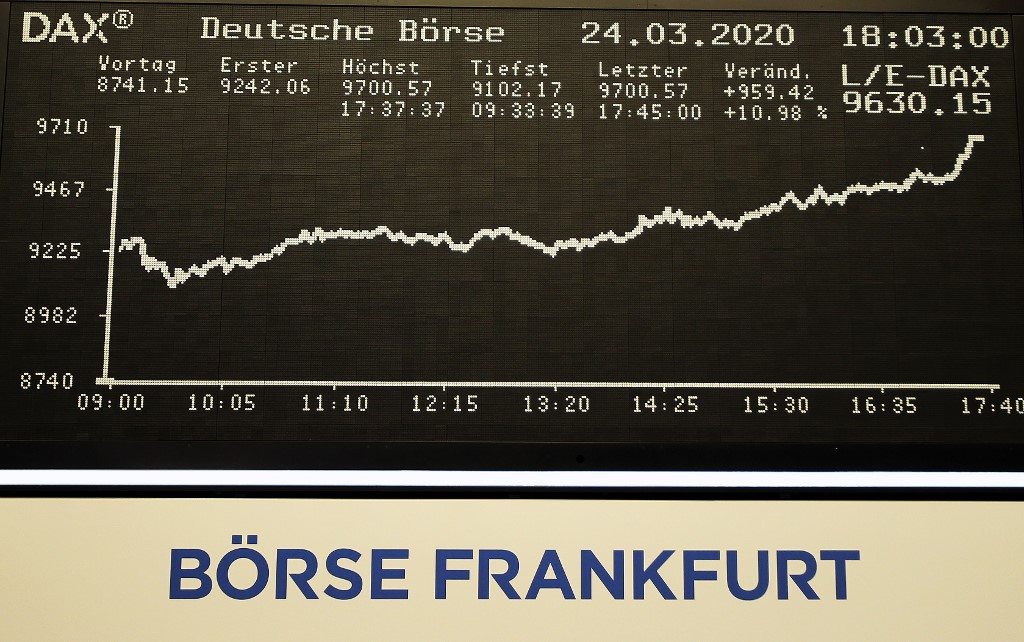 NEW YORK, USA – World stock markets rallied Tuesday, March 24, on expectations for a massive United States stimulus package and following new moves from the Federal Reserve, the latest salvos in a global counterattack against the damage from the coronavirus pandemic.

On Wall Street, the Dow surged 11.4%, its biggest one-day percentage increase since 1933, boosted by signs Congress is nearing agreement on a rescue package for the US economy that could amount to more than $2 trillion.

Markets also were cheered by the G7’s promise to do “whatever is necessary,” and the Fed’s announcement on Monday, March 23, that it would inject unlimited money into the financial system and serve as the lender of last resort for troubled sectors.

The gains in New York were a turnaround from the rout seen the prior day, and were mirrored in Europe where Frankfurt’s Dax index managed a double-digit rise by the close.

“The market is expecting a major fiscal package to help cushion the downside caused by the shutdown of the economy,” Quincy Krosby of Prudential told Agence France-Presse.

Negotiations were continuing over the final detail, with congressional leaders reassuring the country they were getting close to reaching a deal.

Grim survey data showing collapsing eurozone and UK business activity in March did not get in the way of Tuesday’s recovery, as CMC Markets UK analyst David Madden said traders had been expecting the “brutal” survey data.

Meanwhile, investors gave a massive thumbs up to the Fed’s pledge to essentially print money in a move not seen since the global financial crisis.

The central bank, which already had slashed its key lending rate to zero, said it will buy unlimited amounts of Treasury debt and take steps to lend directly to small- and medium-sized firms hammered by restrictions across the country.

AxiCorp’s Stephen Innes called the Fed’s move “the most significant monetary experiment in the history of financial markets,” while the dollar beat a retreat from Monday’s 3-year peak against the euro.

“We’re looking for a series of days with what we call ‘higher highs,'” meaning the market must keep its rally going, Krosby said.

Oliver Jones at Capital Economics said the markets’ positive reactions to the Fed “belies the fact that central bank actions have yet to quell the strains showing up across the global financial system.”

“It is hard to see a lasting recovery in equity prices until those strains subside,” he said.

Edward Moya at OANDA sounded a similar note of caution, saying “investors will not be surprised if we see one last major sell-off before anyone will feel comfortable in calling a bottom.”

Equities in Asia rallied, with Tokyo ending more than 7% higher.

The Nikkei was given extra lift by a Bank of Japan decision to embark on its own massive bond-buying scheme.

A weaker dollar helped lift crude, which has been hammered to recent multi-year lows on the back of a price war between producers Saudi Arabia and Russia. – Rappler.com