After series of disasters, students unite to call for nationwide academic break 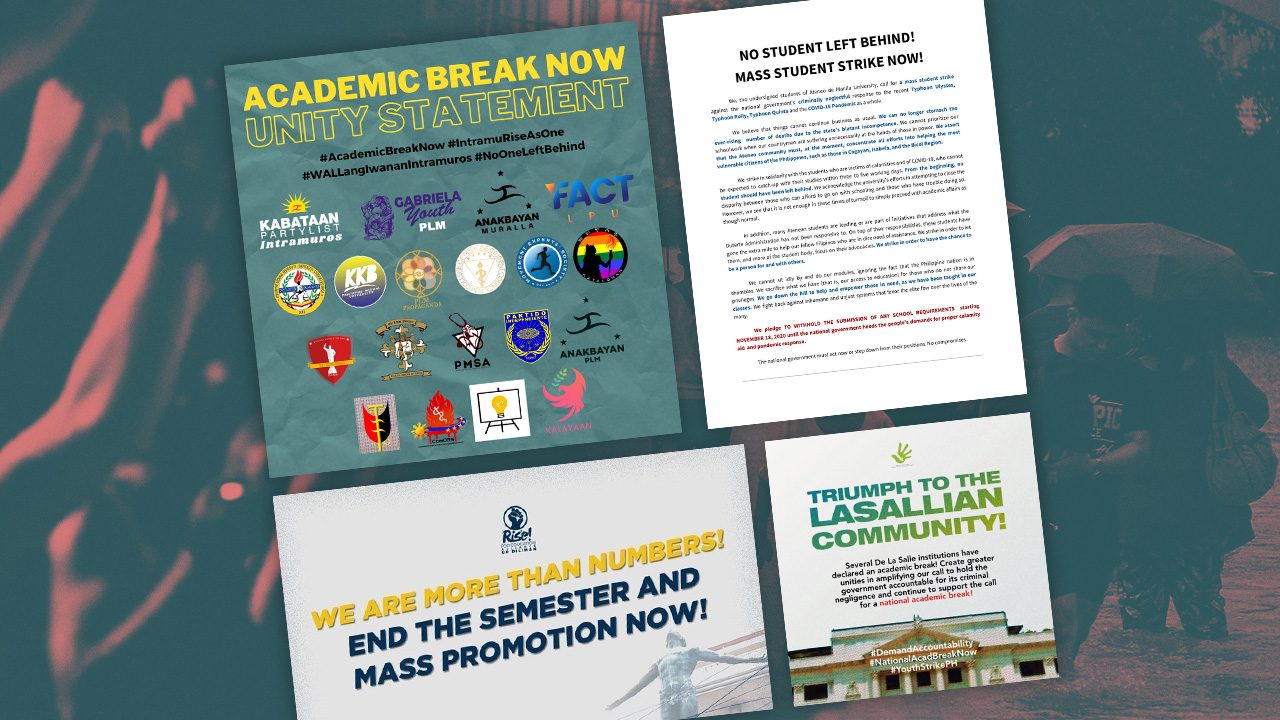 Facebook Twitter Copy URL
Copied
Although the Commission on Higher Education has rejected calls for a unilateral suspension of classes in the country or in Luzon, students are adamant to make their voices heard

Refusing to glorify the resilience of Filipinos in the face of disaster, students from Luzon to Mindanao have banded together to call for a national academic break.

Taking off from their initial pleas in their respective universities, many have escalated their calls to the national level. Their demand is for the government to suspend all academic requirements and classes nationwide until every student recovers from recent disasters.

The massive student movement comes on the heels of a series of disasters that has added to the problems of students and the academic community that are already dealing with distance learning.

In just 3 weeks, the Philippines experienced the wrath of Typhoon Quinta, Super Typhoon Rolly, and Typhoon Ulysses all not only costing lives but also causing massive destruction on property and power supply woes.

While schools like the Ateneo de Manila University (ADMU), De La Salle University (DLSU), and the University of Santo Tomas (UST) granted students academic breaks in light of the recent disasters, it is not the case for all.

Saint Louis University (SLU), for instance, suspended classes the week Typhoon Ulysses battered the country. Midterm examinations, meanwhile, were only moved by a week, making it difficult for affected students who may still be dealing with severe flooding and intermittent signal.

This forced the SLU Supreme Student Council (SLU SSC) to highlight that the university has students from all over the Cordillera Administrative Region and neighboring provinces such as Cagayan and Isabela, which were severely affected by Ulysses.

“We refuse to glorify the resilience of the Filipinos. Instead, we move to genuinely embody bayanihan that emphasizes solidarity and ensures no one is left behind,” SLU SSC said in their statement.

A show of indignation

Kicking off the domino effect were the more than 500 Ateneo students who pledged not to submit any academic requirements until the government gives ample disaster relief to the victims of Typhoon Ulysses and proper response to the COVID-19 outbreak.

Many students and faculty members in the country have long criticized online learning, citing unstable internet connection and insufficient gadgets at home. These movements triggered an early end of the semester for the University of the Philippines (UP) in April, which later granted the academic community a break twice in the current semester. The clamor from these movements has also paved the way for the implementation of a “no fail policy” in UP this semester.

The movement has since evolved, with Ateneo students urging other Filipino youth to stand with them in holding the Duterte government accountable and in calling for a nationwide academic break.

The universities leading these calls today are ADMU, DLSU, UST, and SLU.

In pursuing a movement of this scale, Ateneo student and petition initiator Elise Ofilada explained that the strike was the best means of “disrupting the oppressive status-quo and giving us (students) a chance to assert our rights.”

“In the past 4 years, we’ve seen thousands of Filipinos die because of the government neglecting to do its job to serve the people. More people will die if we don’t act now. It’s the youth’s role to stand with the disenfranchised to make changes for a better future,” she explained.

“Ateneo may have begun the call to strike, but we won’t be the last. More are joining. The government’s threats are proof of the potential of our movement and proof na takot sila sa kabataang lumalaban (they are scared of youth resisting),” Ofilada added.

The movement of these Ateneo students earlier drew the ire of public officials, with Presidential Spokesperson Harry Roque warning students that they would fail, and President Rodrigo Duterte threatening to defund the University of the Philippines if the students joined the academic strike.

The threat hardly landed as UP students and faculty initiated their own petitions afterwards demanding mass promotion and an end to the semester. These petitions have gathered over 15,000 signatures as of Monday, November 23. (READ: No student left behind? During pandemic, education ‘only for those who can afford’)

The outrage has also spilled onto the streets, with UP students and faculty staging a series of demonstrations.

The Council of Student Leaders of the UP Los Baños University Student Council (UPLB USC) chose to solidify these demands through a university-wide academic strike in a bid to pressure the university administration into ending the semester and passing all students. According to UPLB USC Chairperson Jainno Bongon, this strike is the most apt way to unite the various sectors across the university in amplifying their demands collectively.

“Despite the fact that only a fraction of the university was affected by the pandemic and the typhoons, joining the strike to voluntarily withhold submission of requirements serve as solidarity towards those who have no option whatsoever to submit theirs,” continued Bongon.

He noted that members of the university community have held dialogues with the university administration and Commission on Higher Education on these demands. However, a deadlock persists as the authorities remain adamant to continue the semester. “Time is ticking. Affected students are filing LOA (Leave of absence) left and right since they won’t be able to keep up if the UP admin insists on continuing. We had no other options. We had to launch it (the strike) now to put more pressure on the UP and Duterte admin to act immediately,” said Bongon.

More than 20,000 De La Salle students have also lent their voices to the call, signing a system-wide petition led by La Salle Students for Human Rights and Democracy to demand an academic break in the university.

In a similar fashion, the UST Central Student Council demanded a national academic break to put a halt to the romanticization of students’ resilience.

“We recognize the strong spirit of bayanihan in these pressing times, but we also acknowledge that this is the manifestation of the national government’s lack of urgency, incompetence, and self-serving privilege to remain in power,” they said.

Despite these resounding calls for a national academic break from students across the country, the Commission on Higher Education (CHED) has so far rejected calls for a unilateral suspension of classes in the country or in Luzon, saying this decision is best left to schools.

Refusing to let their calls fall on deaf ears, students have continued to amplify their causes on a national level and demand action from their respective school administrators.

Ofilada, for instance, said she and the other Ateneo students on strike will continue striking and demanding accountability from the concerned officials until they get results.

“CHED has become useless in the face of national crisis, abandoning its constituents when needed the most. But, still, we can fight for our voices to be heard in our respective universities,” she continued.

Ofilada and other fellow strikers, through the student council, are already engaging in dialogues with ADMU to enact policies that leave no students behind.

SLU SSC has also sought ways to engage their administration. Along with presenting the demands for academic ease to their school administration, SLU SSC Director for External Affairs Gail Abrazado added that the student council is also crafting better policies to aid the student body in their academics and mental health as they recover from the recent calamities.

In staging this movement on a local and national scale, Abrazado emphasized the indispensable role of students: “The youth’s responsibility is to assure that their future is secure and that there even is a future to look forward to. If no one will hear the voices of the youth, then all the more that we should amplify each other’s voices via collective action against the school administration, the government, and the system as a whole.”

“The youth, being the ones that are most affected by the situation, have the most incentive to incite action from the institutions that are depriving us of quality education. But more than that, even if we aren’t directly involved in a problem, for as long as it may hamper our future and the lives we want to live, then it is our responsibility to take collective action,” she added. – Rappler.com