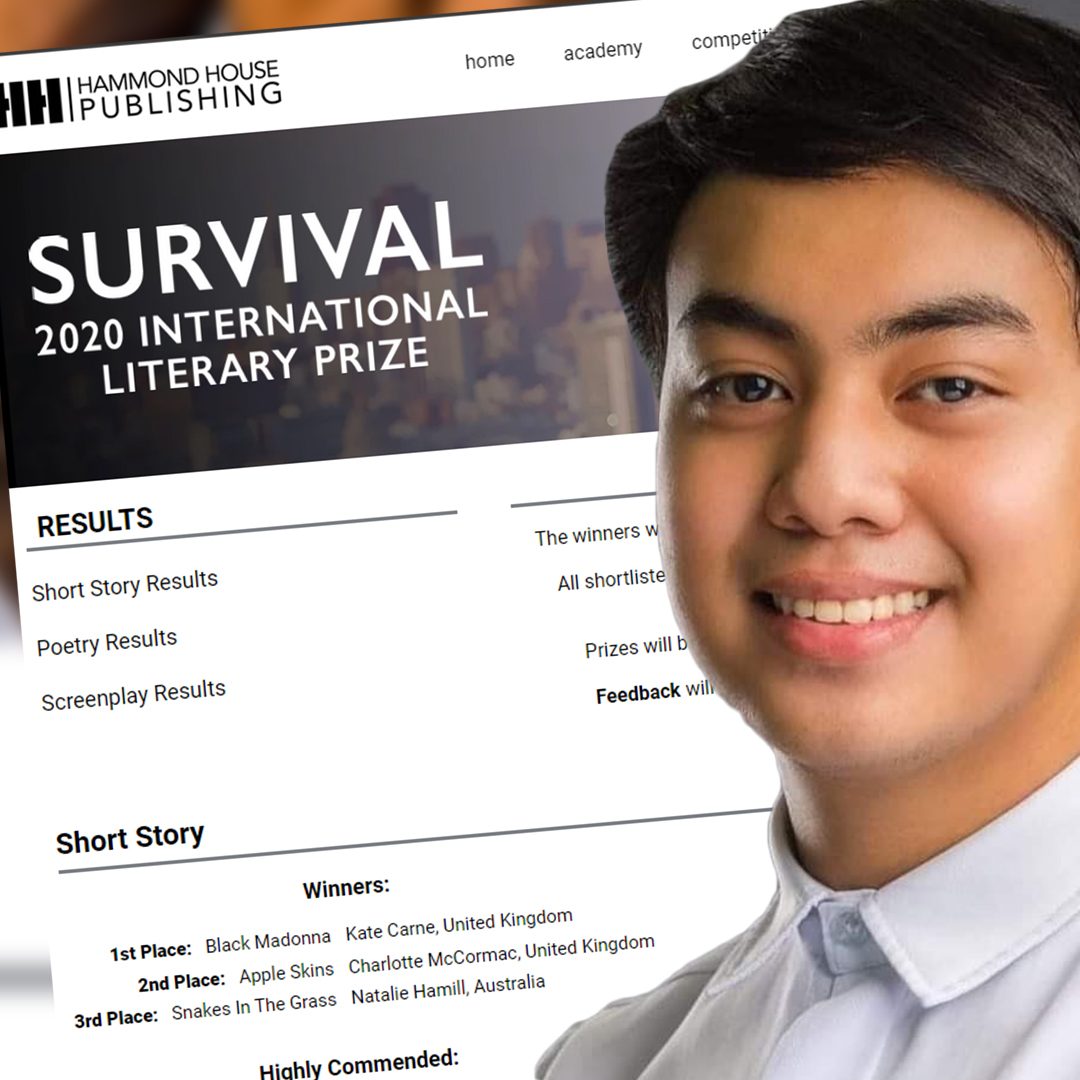 When the Philippines imposed quarantine measures starting March 2020, many Filipinos found themselves forced to stay at home to keep safe against COVID-19.

As a way to cope with the uncertainty and isolation caused by the pandemic, 21-year-old student Christian Andrei Laplap found comfort in writing stories. (READ: During these days of solitude, consider these books)

Laplap, a third year psychology major at the University of the Philippines (UP) Cebu, said he wrote “stories floating around my head” to help him get through the pandemic.

But little did he know that his pandemic-inspired piece would earn him an international literary achievement.

Laplap’s “The Oddities That is Them,” is among the short stories selected to be on the Editor’s Choice winning list under the 2020 International Hammond House Literary Prize.

Hammond House Publishing’s International Literary Prize is an annual literary competition based in the United Kingdom. The University Centre Grimsby sponsors this contest, awarding the winners with cash as well as the publication of their submissions.

Behind the winning peace

Laplap has been a freelance writer since 2013. As he wrote stories during the pandemic, mostly revolving around the flaws of being human, the Cebu City resident began to look for literary contests online.

This was how he found out about Hammond House Publishing’s 2020 International Literary Prize, and he submitted his short story on May 23, 2020.

His story revolved around a sidewalk chance encounter of two luggage-carrying protagonists, who collided and subsequently engaged in a life-changing conversation.

The young writer then edited one of his pandemic-inspired outputs,  “The Oddities That is Them,” to suit the competition’s “survival” theme.

Laplap said his tale was inspired by the power of social interaction and finding oneself by talking to others, which he himself had realized during the quarantine. “Human connections are important,” he said.

Laplap also explored emotional baggage and discussed about “personal issues – heavy luggages – that stick with us, and how traumas are a part of us and can be healed by us.”

The writer said he wanted to convey through his writing how “the breadth of mental health issues is under-recognized” during the pandemic. (READ: Mental health toll of pandemic ‘devastating’ – WHO)

Laplap decided to focus his narrative on mental health because he noticed how people, both online and offline, are left to face their own issues, especially because of the long-term social isolation that the health crisis brought about.

Laplap said he wasn’t expecting much from his piece, as he’s not a native English speaker and that there was a large volume of submissions worldwide. He said that he felt stunned and grateful to receive Hammond House’s email informing him of his win.

He said the recognition is an opportunity to improve his writing, allowing him to explore different writing styles and themes to relate to a diverse audience. (READ: ‘Diary of a COVID-19 Patient’: A Baguio doctor’s journey)

Hoping to pursue his passion and inspire others with his stories, Laplap shared that he looks forward to joining other literary contests in the future.

“As long as there’s a story to tell, I will continue to write and send in entries,” he said.

He encouraged other aspiring Filipino writers to focus first on what they’re passionate about, research on that subject, and then write to inspire others, without looking at the incentives that they may earn.

“The writing journey is a discovery of self, of what you’re capable of, and the tales you’re able to tell…. That journey is enough of a reward,” Laplap said.

The UP Cebu student is set to join the competition’s online awards ceremony on Saturday, February 27.

The nonprofit organization and publishing company is also scheduled to release all shortlisted pieces, including Lapap’s, in its 2021 poetry and short story anthology later this year. — Rappler.com