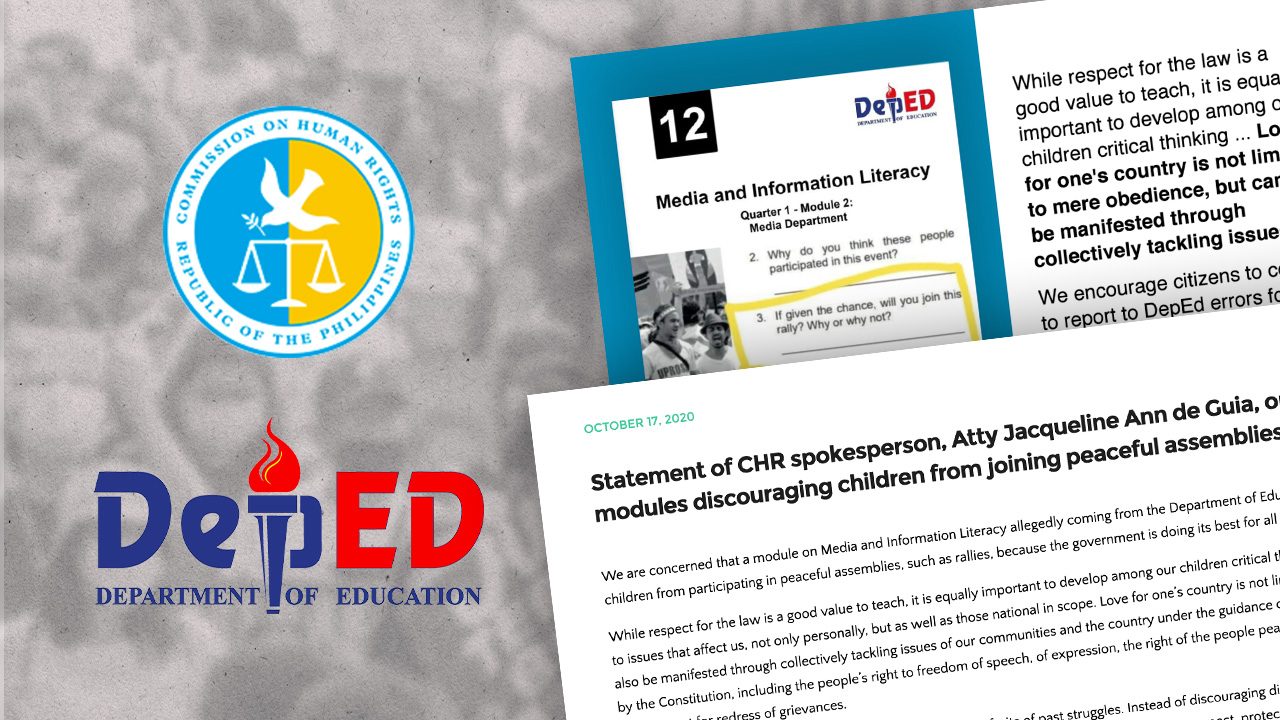 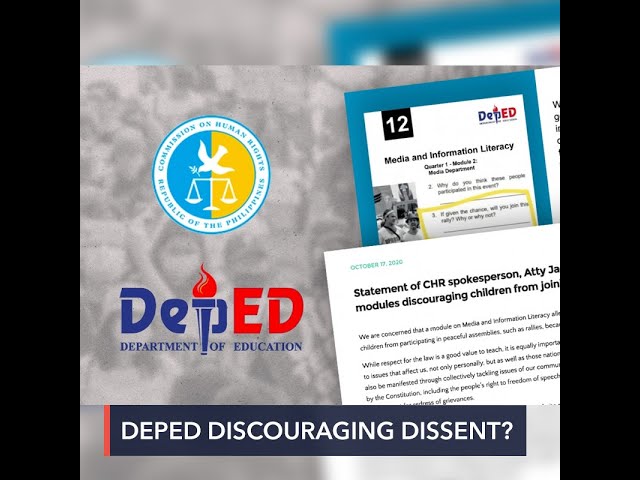 The Commission on Human Rights (CHR) on Saturday, October 17, said it was concerned that a learning module discouraged students from joining peaceful assemblies.

The module on Media and Information Literacy, which had the logo of the Department of Education (DepEd) on its cover, was distributed to senior high students of Amulung town in Cagayan.

In a statement, CHR spokesperson Jacqueline Ann de Guia cited the importance of expressing dissent to demand for accountability and better services from the government. The right to assemble peacefully was part of one’s right to freedom of expression.

“Instead of discouraging dissent, it would be better to demand better services and accountability from the government and its officials as part of their duty to respect, protect, and fulfill the rights of all,” CHR said.

The controversial portion of the module showed a photo of Filipinos participating in a protest. It asked students to explain why or why not they will join rallies. Screenshots of this activity made rounds on social media, which also gained traction from the netizens.

Another page showed the answer key to the question in the module explaining not to join these protests because “the government has really [been] doing their best for all Filipino people and their constituents.”

CHR said in its statement that Filipinos are entitled to their right to freedom of speech, of expression, the right of the people to peaceably assemble, and petition the government for redress of grievances.

“Love for one’s country is not limited to mere obedience, but can also be manifested through collectively tackling issues of our communities and the country under the guidance of rights entitled to us and protected by the Constitution,” CHR said.

CHR emphasized the importance of not just teaching how to respect the law to students but also in helping them develop critical thinking especially with issues that affect communities.

It also encouraged Filipinos to continue to report to DepEd errors found in the learning materials for the benefit of the students. This will also serve as a call for an improvement for the country’s current educational system. (READ: FAST FACTS: DepEd’s distance learning)

After conducting an initial investigation, the Department of Education clarified on Monday, October 19, that the module, which had the logo of the agency and was distributed to senior high school students of Amulong town in Cagayan, is not part of its curriculum resources.

According to the DepEd, the module “did not pass the conformance review of the Curriculum and Instruction strand of the Central Office.” The department asserted that it “upholds the Constitution and believes in the principle of freedom of speech and expression.”

The DepEd said it is still tracing how the material was circulated. It also encouraged people to reach out to DepEd’s Public Assistance Action Center for any details that can help accelerate their investigation into the issue.

This is not the first time that DepEd was called out online for its modules in distance learning. A day after school opened, netizens spotted a mathematical equation with an incorrect solution that was aired on DepEd TV. – Rappler.com