Facebook Twitter Copy URL
Copied
Moving forward to 2021, the promise of a new year doesn't guarantee a digital space free of disinformation. Instead, this year would be critical, especially as the election draws near in a pandemic-hit country like the Philippines.

The battle against disinformation took Filipinos to different heights in 2020.

We saw how the spread of disinformation went crazy – from the false claims on cures and the never ending conspiracy theories about COVID-19, to government officials managing fake accounts and even creating confusion from its public statements during the pandemic.

Moving forward to 2021, the promise of a new year doesn’t guarantee a digital space free of disinformation. Instead, this year would be critical, especially as the election draws nearer in a pandemic-hit country like the Philippines, called a petri dish for information operations.

Fact-checking: A year of infodemic 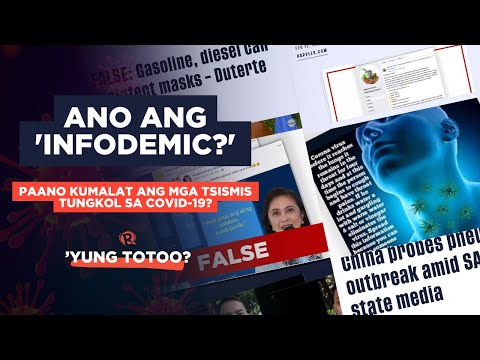 “I think you have to then plan out 2021 because 2021 is the year before we elect a new set of leaders in 2022. And the social media environment will be very toxic, will be very charged and will be polluted with a lot of disinformation,” Rappler’s executive editor Glenda Gloria said in a MovePH webinar when asked how Filipinos can be responsible social media users.

Not alone in the battle

For one, journalists have kept the long time role of verifying information and debunking lies even as they faced unprecedented challenges during the pandemic.

“Journalists are expected to verify information, speak to sources and make events intelligible. The free-for-all posts on social media cannot be similarly rigorous,” said Diosa Labiste, assistant professor at the University of the Philippines (UP) Department of Journalism.

Gloria echoed this citing that despite the influx of information that’s available online, media still plays a very important role.

“[Media’s role] is to not just only consolidate but make sense of [the information], especially, if i may say so, under a government that speaks with many voices. The public is best served when those voices are rationalized in a very simple manner,” Gloria said.

But while journalists are at the forefront in fighting for truth, the battle is not theirs alone.

According to Gloria, although social media platforms are only a part of the reality we live in now, there is still a need to take swift action in debunking lies in the digital space.

“Because of [the] spread [of disinformation], because of its extent of influence and reach, then we have to constantly clean up our spaces online. And by cleaning them up, we have to debunk lies immediately, not a second longer, because then that lie that you decided to ignore would have already been [passed],” she said.

As more suspicious claims are expected to surface online in an effort to chip away facts and divert public attention leading up to the elections, journalists for sure can only do so much.

For VERA Files reporter Celine Samson, it is high time that more digital citizens get involved in fact-checking.

“Journalists shouldn’t be the only ones fact-checking anymore. Everybody should be able to do fact-checking so it’s important that we teach them the tools that we use and how to spot misinformation and there are initiatives to do that by media organizations,” Samson said in a November 2020 webinar hosted by Friedrich Naumann Foundation (FNF). Digital rights activist Al Alegre also supported this, saying that it is not just the media’s responsibility to tell the truth but even social media users as well. The simple task of not sharing any suspicious claims to their own profile, or spotting and reporting these claims can be a big help.

“All of us should be truth tellers; don’t rely just on the media. They have an important role to play [but so are the individuals]. Fact check individually but make it as a community function because at the end of the day, we have to involve our communities,” Alegre said in another webinar hosted by MovePH in November 2020.

To be able to do this, Alegre highlighted the importance of working together with various sectors including academic institutions, international groups, and other civic organizations.

“Reach out intersectionality not only to media, but also to other sectors… I think we should innovate more in what types of coalitions and networks we need to build, to address the problem of a broken information ecosystem,” Alegre added.

MovePH, Rappler’s civic engagement arm, held over 20 fact-checking webinars and trained almost 3,000 participants across the country in 2020. At least 12 of them have gone through rigorous training on fact-checking through a mentorship program and were able to publish actual fact-check stories debunking false claims on various topics.

The problem of disinformation, however, exposed the need to address the lack of civic education in the country.

“The literacy that we need is a much more robust literacy, it’s not just fact-checking in all of these things, but it’s also what’s behind the technology, what’s behind the platform, what are the interests involved?” Alegre said.

“Literacy should go beyond the traditional media information literacy but digital, social media literacy,” he stressed.

Philstar.com’s editor-in-chief Camille Diola, in the same webinar, said that addressing this problem will provide a better understanding of our digital rights and freedom, and the roles of institutions and free press.

“It is difficult to make a citizen really appreciate what we’re trying to do as media, in the media, in the civil sector, if there’s a misunderstanding of these things,” Diola said.

But this problem puts a greater challenge not just for media organizations, but also for educators, let alone government policies or curriculum in academic institutions in the coming years.

Moreover, critics have also hit technological platforms not only for allowing disinformation to thrive in digital public spaces, but also for prioritizing profit for engagement even if that meant amplifying hate and violence online.

“[Platforms developed] are optimized for engagement, it’s optimized to look at what makes you click, what makes you engage. [These platforms] work differently and knowing the differences there is part of understanding how to counter [disinformation] and that takes a lot of time and effort,” Rappler’s head for Digital Strategy Gemma Mendoza stressed in a webinar hosted by FNF.

This is why, according to Mendoza, it is very important to engage, study these platforms and write about what they’re doing and how their algorithms affect public discourse. (READ: [ANALYSIS] As democracy dies, we build a global future)

“[Studying these platforms] is hard because it’s technical and you need to look at a lot of data, you need to observe how it’s working, but we need to do it and the public needs to be aware how this is working and how it’s affecting the entire fabric of the entire conversation,” Mendoza said.

Although individuals and journalists have a role in combatting disinformation, the pressure to fix the problem shouldn’t be left on them alone to carry: “It’s really important that we not put the onus on individuals, and journalists for solving this problem, a much more complex information ecosystem failure.”

“The platforms have fundamental responsibilities to ensure that they are taking action that recognizes their own complicity, it’s not just a case of educating others to deal with disinformation, it’s a case of fixing the flipping problem,” Posetti said during the digital media, technology and society webinar hosted by MovePH.

With these, Posetti stressed that communities need to actively “fight” disinformation in order to guard the truth.

At the end of the day, whether the need is to learn more how to be discerning and critical online or demanding accountability from the government and tech platforms, one thing is for sure: it will take a community to decisively beat disinformation. – Rappler.com