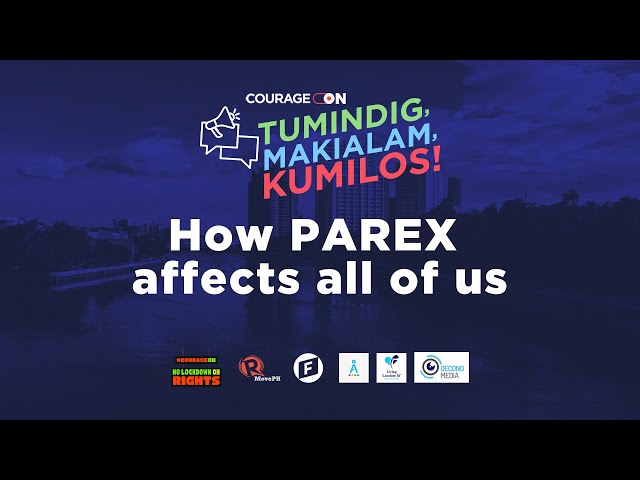 Facebook Twitter Copy URL
Copied
As calls to say #NoToPAREX mount, we talk to advocates and residents about why we should be concerned about the controversial expressway in the sixth episode of the #CourageON show

The proposal to build an elevated expressway along the Pasig River has drawn massive criticism from transport, environmental, and heritage groups.

Advocates, however, have echoed concerns that the project will do the opposite, citing potential harm not only to the city’s transport system but also to the environment, among others. Multisectoral coalition #IlogPasiglahin #NoToPAREX Movement initiated a petition signed by thousands of Filipinos to show the public’s staunch opposition to PAREX.

They worked on the petition after the government approved San Miguel Corporation’s proposal to build the elevated expressway, followed just three days later by a groundbreaking ceremony. This sparked concerns among mobility advocates about the Duterte administration’s “unusually fast” approval of the PAREX.

As calls to say #NoToPAREX mount, questions surrounding the project have cropped up: How does PAREX affect us? Why are groups opposing this? Why is this a big deal?

In the sixth episode of the “#CourageON: Tumindig, Makialam, Kumilos” community show, we answer these questions and more with experts and residents.

The community show, organized by Rappler’s civic engagement arm MovePH in partnership with Friedrich Naumann Foundation for Freedom, aims to put the spotlight on pressing issues in the Philippines and the ways we can take collective action on them. This episode is co-organized by AltMobility PH and #IlogPasiglahin #NoToPAREX Movement. It is also co-presented by Living Laudato Si Philippines and Oecono Media.

Titled “#CourageON: How PAREX affects all of us,” the sixth episode of the community show will feature panel discussions with environment, heritage, transportation, and urban planning advocates to describe the potential impact of the elevated expressway, and share ideas on possible sustainable alternatives.

The episode will go live on October 9 at 4:30 pm. Participants can join the live session on Zoom by registering here:

SEGMENT ONE: Why should we be concerned about PAREX?

This will be hosted by Rappler’s community lead Jules Guiang and Rappler’s membership lead Happy Feraren.

Check out the other episodes of the “#CourageON: Tumindig, Makialam, Kumilos” community show here: