#CourageON: Lessons to keep our democracy 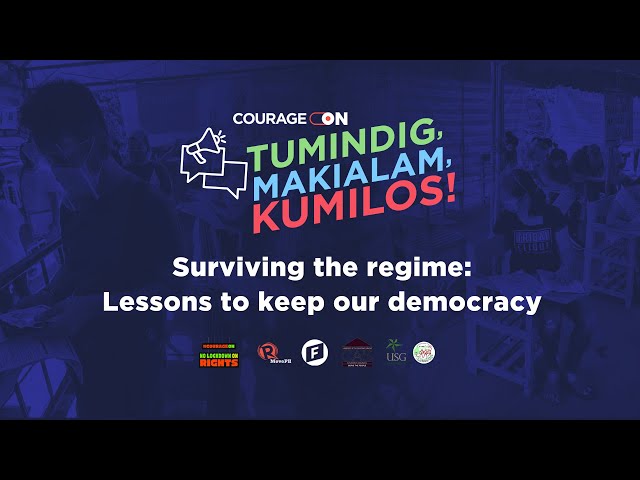 The Philippines is the deadliest country for land and environmental defenders in Asia.

This is the eighth straight year that the country held the top spot, according to the 2021 report of nongovernmental organization Global Witness that showed the statistics of killed land defenders in different countries. The organization recorded in its 2021 report a total of 29 documented killings of “people defending their homes, land and livelihoods, and ecosystems” in the Philippines alone.

Under the Duterte administration, 166 killings of land defenders were recorded since 2016, while a total of 30 indigenous people protecting their lands were killed, according to Global Witness.

Philippine land defenders and indigenous peoples aren’t alone in facing such threats. Tens of thousands have been killed in Duterte’s war against drugs, with human rights groups saying that about 27,000 have been killed.

In the fifth episode of the “#CourageON: Tumindig, Makialam, Kumilos” community show, we delve deep into the findings of the 2021 Global Witness report, and discuss what we can do to ensure our communities feel safe to speak up and exercise their rights.

The community show, organized by Rappler’s civic engagement arm MovePH in partnership with Friedrich Naumann Foundation for Freedom, aims to put the spotlight on pressing issues in the Philippines and the ways we can take collective action on them. This episode is also co-organized by Kalikasan People’s Network for the Environment.

As activists and vulnerable sectors are once again under attack during the term of an authoritarian figure, we go back to history to glean learnings on how we can continue to keep our democracy alive.

Titled “Surviving the regime: Lessons to keep our democracy,” the fifth episode of the community show will feature panel discussions with environmental defenders on the relevance of the Global Witness 2021 findings, as well as with Martial Law survivors and present-day activists on why we should never forget what we’ve had to go through to attain our democracy.

The episode will go live on September 25 at 4 pm. Participants who want to learn more about the impact of the 2021 Global Witness report, and get insights on how we can keep fighting for democracy, can join the live session on Zoom by registering here:

SEGMENT ONE: Looking into the Global Witness 2021 report findings

Aside from the panel discussions, the show will also feature the launch of the De La Salle University Student Government’s anti-red tagging policy toolkit for universities and institutions.

This will be hosted by Rappler’s community lead Jules Guiang and Rappler’s membership lead Happy Feraren.

The fifth episode of the #CourageON community show is co-presented by the University of the Philippines Visayas College of Arts and Sciences Student Council and the De La Salle University Student Government.

Check out the other episodes of the “#CourageON: Tumindig, Makialam, Kumilos” community show here:

MovePH, the civic engagement arm of Rappler, is open to co-present this episode with like-minded organizations. Feel free to send a partnership query to move.ph@rappler.com.