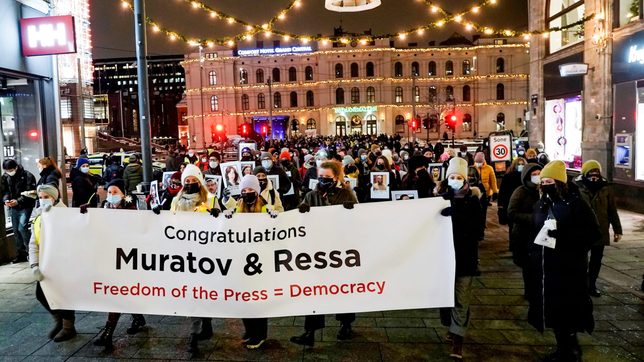 People participate in a torchlight procession without torches, which were omitted for coronavirus disease (COVID-19) spread control reason, in honour of this year's Nobel Peace Prize winners Maria Ressa and Dmitry Muratov in Oslo, Norway, December 10, 2021.

Facebook Twitter Copy URL
Copied
More than an unprecedented recognition of journalism's role in today's world, Filipinos saw the accolade as a reminder to 'hold our ground and stand up for what we believe in'

MANILA, Philippines – The Nobel Peace Prize is the world’s most prestigious political accolade. For it to go to veteran journalist and Rappler CEO Maria Ressa and Russian journalist Dmitry Muratov shows an unprecedented recognition of journalism’s role in today’s world.

And for many Filipinos, the award also meant so much more: a reminder to “hold our ground and stand up for what we believe in, even under circumstances when we’re intimidated to duck and cower,” a “clarion call for vigilance,” a source of inspiration to “further push forward in efforts for truth and justice,” and a recognition of the harrowing fight for press freedom, among others.

As the two journalists were awarded the Nobel Peace Prize on Friday, December 10, groups and individuals across the Philippines commended Ressa for her work and shared its impact to their advocacies and communities.

Here are just some of the congratulatory messages that Filipinos made to celebrate Ressa’s Nobel Prize win:

“We are taking so much courage from your example,” one of the movers said in their tweet.

Other Filipinos also sent in their congratulatory messages for Ressa using the hashtag #CongratsMariaRessa.

“We believe that Rappler’s ideals inspire us to continue to promote the important role of citizen journalism in the province of Pangasinan…. Rappler’s #ZeroCasualty initiative taught us to use citizen journalism to save lives, empower science communication, and fight disinformation,” Kevin Ibasco, Pangasinan Youth for Disaster Risk Reduction and Management founder, said.

Human rights group Karapatan also congratulated Ressa, saying it is fitting she is recognized on Human Rights Day, “at a time when the Filipino people face the most atrocious attacks on people’s rights.”

Despite being on the receiving end of attacks and legal harassment themselves, Ressa and Rappler journalists have reported on press freedom violations, threats and attacks against critics and human rights defenders, killings in the drug war and the war against dissent, and other human rights violations.

“Amid attempts to silence critical voices, protests, and dissent, those who dare to retell the truth and assert the people’s right to information contribute to the people’s broader movement for justice and accountability. Ressa and Rappler have made such contributions,” it added.

Acknowledging the important role that journalists and media practitioners play in upholding human rights, Karapatan hoped the international recognition for Ressa and Rappler can “enable them to continue their work and pursue their commitment to these principles.”

This was echoed by the Cordillera Human Rights Alliance, which said her recognition was more relevant now following the decision of the Supreme Court to uphold the majority of the contentious and draconian provisions of the controversial Anti-Terror Law.

Meanwhile, Ray Dean Salvosa, First Quarter Storm activist and former president of the University of the Cordilleras, said Rappler CEO Maria Ressa’s work despite the challenges brought about by the government made the Nobel Peace Prize rightly earned.

Among those who lauded Ressa’s award were campus publications, media organizations, and journalists collectively fighting for truth in an environment that demonizes the press.

In fact, the award comes on the heels of the recent killing of Kapampangan veteran journalist Jess Malabanan. Emphasizing its timeliness, Pampanga-based content creator Kevin Montalbo said the award is proof that “free and independent journalism in the Philippines is still under threat.”

“The Nobel Peace Prize is a major win for truth in a country split in ideologies. May you continue fighting the good fight. Luid kayu pu (May you live long)!” Montalbo added.

This was echoed by journalists based in Baguio, through a statement released by Aldwin Quitasol, the president of Baguio Correspondents and Broadcasters Club. He said, “her recognition proves that every struggle for people’s rights and democracy and being vocal against abuses is a noble deed in a world where injustice reigns.”

Younger journalists were also inspired by Ressa’s achievement. For one, the College Editors Guild of the Philippines (CEGP) vowed to “further push forward in efforts for truth, justice, and press freedom as we want to fight for the rights of the public and public interest.”

“We will continue the effort of delivering the truth of discrimination, (and) injustices, and upholding the rights of the marginalized sectors. We are inspired and ignited by the efforts of our Nobel laureate and we will continue to express the corruption, anomalies, and injustices committed by abusing the powers of the government,” the group said.

Meanwhile, journalism students in the Visayas said Ressa’s win “inspired them” to hold their ground.

Marvin Malificiar, the chairperson of the West Visayas State University-College of Communication Student Council, said Ressa won because of her fight for upholding the truth, which he added was more crucial at this time.