Groups, student leaders present ‘state of the youth’ ahead of Duterte’s SONA

Jul 26, 2020 7:25 PM PHT
Kyle Aristophere Atienza
Facebook Twitter Copy URL
Copied
Through the 'State of the Youth Address,' youth groups call out government for its inaction on issues that affect them

Ahead of President Rodrigo Duterte’s 5th State of the Nation Address (SONA), representatives from various youth organizations came together on Saturday, July 25, to present the “state of the youth” and their stand on various issues.

At their “State of the Youth Address,” the young people called out government for its inaction on youth issues and failure to advance their causes.

(In all of these calls, our voices are important…They are important and critical as we protect our democracy and resist attempts to take away from us of the rights that the older generations have won for us.) 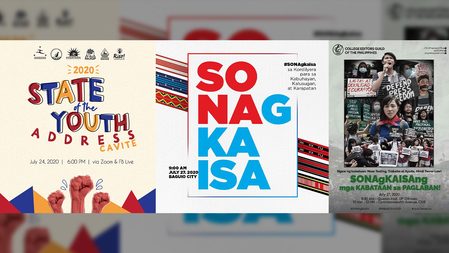 Youth groups assailed the government’s continued “incompetence” especially during a pandemic which has already wreaked havoc on the lives and livelihood of Filipinos.

(Now that we’re in the middle of a pandemic, the problems faced by the people become more glaring. They are ready to adjust and sacrifice, but the government does not return the same effort.)

Blaise Bellosillo of the National Union of Students of the Philippines said that the government is “hell-bent” on opening classes in August even if the country is still dealing with the coronavirus pandemic.

Bellosillo added that the push for flexible learning, despite calls from students and groups to implement an “academic freeze” until the pandemic is under control, is used to “mask” the government’s incompetence to address the pandemic. He added how prioritizing medical solutions, including mass testing, would hasten the safe resumption of classes.

Worsened red-tagging and incidents of harassment

On top of struggles to access and continue education during the pandemic, the youth are now especially vulnerable to red-tagging and other human rights violations following the signing of the anti-terror law.

With the controversial measure, Save Our Schools volunteer teacher Chad Booc worried about how human rights violations would intensify, especially with the already rampant terrorist-tagging and military presence in their communities. Mining interests have also exacerbated the militarization of Lumad schools and communities, according to Booc.

Anakbayan spokesperson Al Omaga said their organization has already faced various charges filed by the authorities, while their members have been called “communists”. This is especially concerning as the Anti-Terrorism Council, composed of Duterte Cabinet officials, has the power to initiate actions against more people, not just suspected terrorists and arrest them even without a warrant.

Campus journalists, meanwhile, slammed the “worsened” attacks on campus press in universities and schools nationwide, saying that under the Duterte administration, red-tagging and harassment of their ranks have also been prevalent.

The College Editors Guild of the Philippines has reported almost 1,000 violations against campus press freedom since 2010.

Youth for Mental Health Coalition spokesperson Patrick Reyes called for a “comprehensive COVID-19 mental health response,” especially as the Anti-Terror Law may affect the mental health of the people.

Reyes said the Duterte administration “has failed yet again to treat the COVID-19 pandemic as a public health issue,” likening its handling of the pandemic to its “failed war on drugs” and assailing “police intimidation and brutality” during the lockdown.

Despite public clamor for medical solutions, the strict implementation of quarantine guidelines has led to reports of police abuse and brutality. Since the beginning of the lockdown, over 38,000 have been arrested for alleged quarantine violations, while the Commission on Human Rights received hundreds of complaints and requests for assistance.

Violence, harassment, and lack of support in the urban poor community continue to be felt by the youth, according to Youth for Nationalism and Democracy- Quezon City spokesperson Patria Malupin.

The urban poor youth leader said the conditions of poverty which the administration failed to curb added to the huge number of out-of-school youth with many students deciding to discontinue their formal education. Majority have already chosen to become part of the country’s workforce at an early age, Malupin said.

Malupin added how workers like jeepney drivers who have lost their source of income during the pandemic still cannot feel support from the government.

(We are not allowed to go outside of our houses, they said, but the government is not giving us enough support…Our parents are jeepney drivers, farmers, fisherfolks, and vendors who are not prioritized by the government.)

Youth groups are set to join the massive protest dubbed as the People’s SONA on Monday, July 27. They will stage a separate program along Philcoa in Quezon City at 7:30 am before joining multi-sectoral groups in a broad rally along the University Avenue in the University of the Philippines– Diliman.