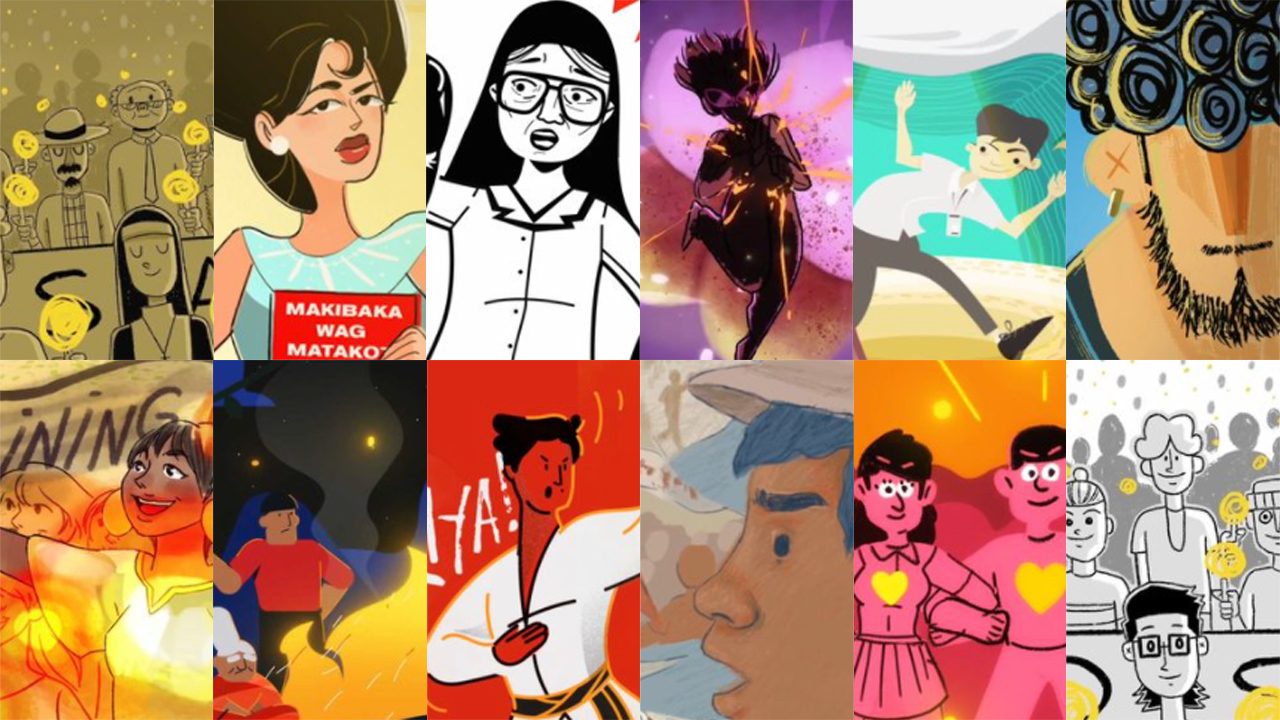 Facebook Twitter Copy URL
Copied
From beauty queen to tribal leader, these nine Filipinos braved the front lines of the movement against the Marcos regime

Martial Law under the late dictator Ferdinand Marcos was a dark chapter in Philippine history marked by state-sanctioned abuses and atrocities.

That reign of terror however, could not snuff out sparks of light – small acts of courage and defiance – that helped illuminate the country in its darkest hours, and ignited the movement against the dictatorship.

This was the core message of the video series “Habilin,” which features Martial Law heroes during the Marcos regime. Launched on the Commission on Human Rights’ (CHR) Facebook page on Friday, July 30, the animated series tells the stories of individuals who stood up to strongman rule.

These individuals might have come from vastly different backgrounds, but with their courage and love for freedom and justice, they blazed their own trails that eventually led to a common path: the EDSA People Power Revolution.

“We know the way and we must all walk together to where the light shines,” the series caption read. “This is the legacy of People Power.”

Margarita “Maita” Gomez came from a well-to-do family, and initially gained fame as a beauty queen, model, and socialite. After marriage, she went back to school at the University of the Philippines, where she experienced a political awakening.

She left the spotlight and committed her life to standing up against injustices and fighting for freedom.

During Martial Law, she was detained but escaped and went underground. She later helped build the Philippine women’s movement and co-founded Gabriela. Following the ouster of Marcos, she helped organize the Philippines’ first women’s political party, KAIBA.

Sister Mariani Dimaranan had always stood up for her beliefs even when she was young. She had to fight for her decision to become a nun which her parents had objected to. She wanted to help others, she said.

She aided political detainees and prisoners during Martial Law, and spoke out against the atrocities of the Marcos regime – acts that drew the ire of the government. She herself became a political detainee in the early years of martial rule.

Her detention didn’t put out the fire in Dimaranan. Having witnessed the injustice firsthand and through her fellow prisoners, she only found a deeper reason to wage the war for freedom.

Waling-waling, a rare Philippine orchid, is a fitting moniker for someone like Coronacion Chiva, who embodied a “rare and unrelenting” spirit that withstood three decades of struggle for freedom.

Chiva’s journey goes as far back as the Japanese occupation in the Philippines. She and her second husband were members of the Hukbalahap guerrilla movement, where she adopted the alias Waling-waling, a name that stuck even after the World War 2.

During Martial Law, she served as an inspiration for the youth who wanted to join the struggle. When she was arrested along with student activists, she would boost their morale with her stories as a veteran in the movement. She also welcomed youth activists in their home, fed them, and helped them in their secret activities.

Lazaro “Lazzie” Silva was a freshman at the Ateneo in when he took part in anti-Marcos student protests known collectively as the First Quarter Storm. In 1971, his high school friend, Pastor Mesina, was shot dead by an irate professor during the Diliman Commune. A few months later, he witnessed the killing of four workers by government troops who fired at them.

Silva decided to fully commit to the movement by helping organize the youth and the urban poor. He eventually decided to leave the city life and join the armed resistance in the countryside.

Marciano “Chuck” Anastacio learned about the hard truths of life at an early age. He got involved neighborhood brawls, alcohol and substance use, and also frequently transferred schools.

Things changed after he met an activist. He started educating himself and reading progressive literature, and eventually became an activist himself. He dropped out of school and decided to commit full-time to organizing the urban poor.

Elma Villaron, as the “chosen daughter” of the head of the Tumanduk in Panay, was raised a binukot or “kept maiden.” The binukot is an old custom where a daughter, from the age of three, is kept hidden from others’ sight as she prepares to become a chosen wife.

She was forced to marry to secure her family financially, but later left her abusive husband, renounced her binukot status, and worked in the fields. Through young activists who organized in Villaron’s community, the Tumanduk learned about their land rights. They suffered military harassment and abuse as they were forced out of their ancestral lands.

Villaron eventually became first woman from her community to join the guerrilla movement. She made remarkable contributions in reforming the sharing system between landowners and peasants, and organizing even rival communities to band together against the abusive Marcos dictatorship.

For Lumbaya Gayudan, life grows where the river flows. A Butbut tribal leader in Kalinga, Gayudan was one to put a premium on natural order, so when the Marcos regime posed threats to disrupt peace in their area, he and his community did not hesitate to put up a fight.

Gayudan played a critical role in one of the most significant chapters in Cordillera history – the struggle against Marcos’ Chico River Dam project.

As a pangat, or peace pact holder, Gayudan also helped forge a treaty that ended years of conflict between the Butbut tribe and the Naneng tribe.

Nestor Principe was not only a karate champion, he was also a champion for justice.

During the First Quarter Storm, Principe went back to school and studied journalism at the Lyceum of the Philippines University, one of the bastions of student activism during the time. He then joined Kabataang Makabayan (KM), where he did discussion groups, mass actions, among other activities.

When Martial Law was declared, Principe fled Manila to avoid arrest and went up north in the Cordilleras. There, he talked to locals and convinced them to fight the dictatorship. He became known in the area as Ka Wadi, the karate expert.

For Armando “Mandrake” Palabay, “Marcos” was a household name. He was born and raised in Ilocos, a bailiwick of the Marcoses.

Upon learning about the atrocities and injustices of the Marcos regime, Mandrake and his elder brother, Romulo, grew interested in current events and discussed issues with friends. Their family home soon became a venue for evening talks with their growing circle.

During the First Quarter Storm, the brothers were determined to enlighten their Ilocos community – Marcos loyalists – about the government’s atrocities. When Martial Law was declared, the Palabay brothers were arrested, tortured, and detained for months.

The video series was created for CHR and produced by Sandigan Para sa Mag-aaral at Sambayanan (SAMASA) Alumni Association. CHR clarifies that this is an independent production. – Rappler.com