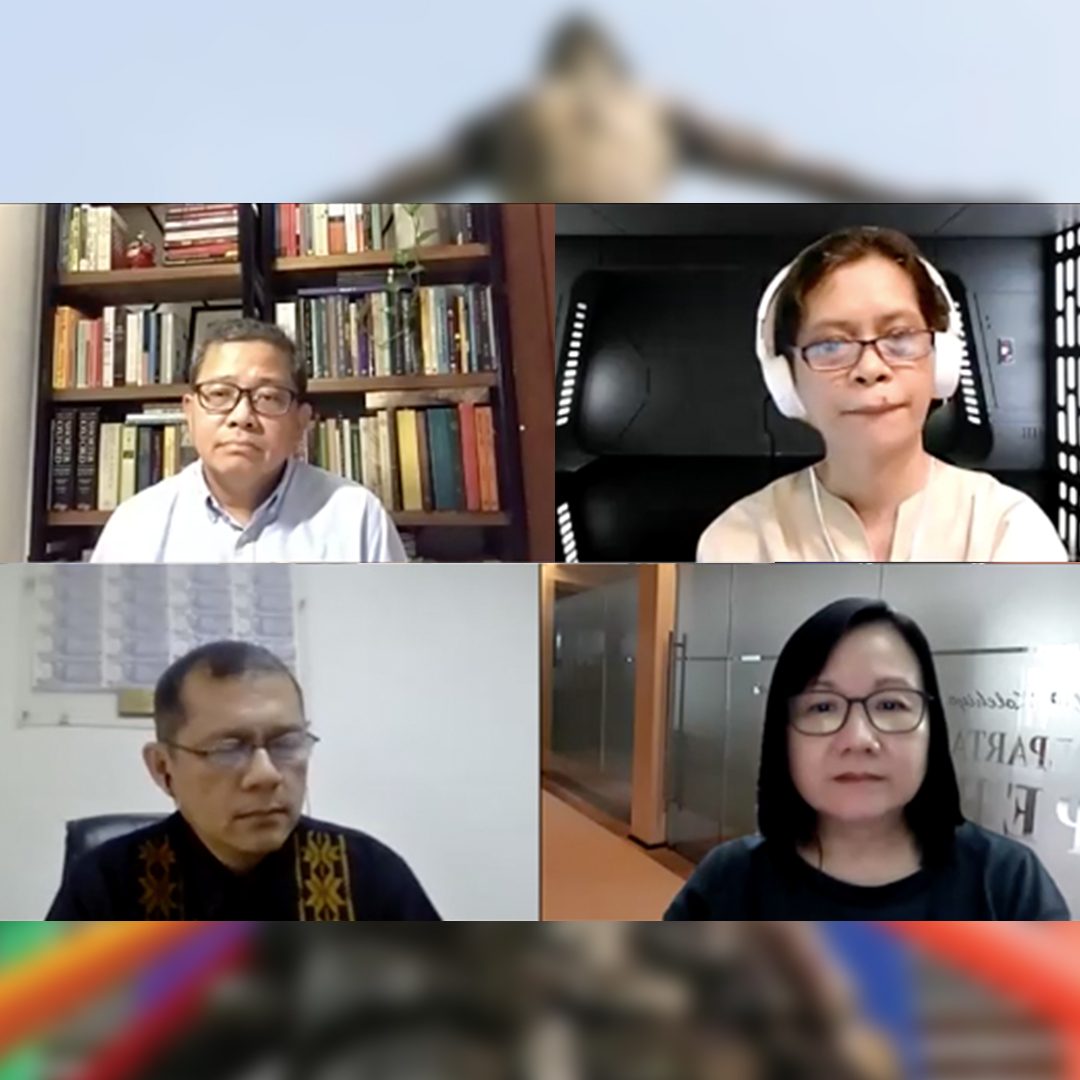 FORUM. University of the Philippines (UP) Visayas Chancellor Clement Camposano, UP Diliman professors Ma. Diosa Labiste and Yvone Chua and journalist John Nery join the first session of the 3-day national online conference on democracy and disinformation on Monday, February 22.

Facebook Twitter Copy URL
Copied
In an online national conference on democracy and disinformation, media practitioners and educators cast a spotlight on the significance of campus journalism in preserving democracy

How important is the role of campus journalists in the fight against disinformation?

In an online national conference on democracy and disinformation hosted by the University of the Philippines (UP) Visayas on Monday, February 22, media practitioners and educators highlighted the significance of campus journalism in preserving democracy given the current online landscape.

At a time when red-tagging has been used to attack universities and campuses, UP Diliman journalism professor Ma Diosa Labiste said there was a need for “counterspeech.”

“We have to create counterspeech or a speech that refutes hate speech, disinformation, fake news, or dangerous speech,” Labiste said.

The Duterte administration has a long track record of red-tagging universities and its students. Since 2018, the government has accused without providing proof at least 18 universities as being recruitment grounds of communists.

This is also despite the fact that it is not illegal to be a communist or to hold beliefs under that ideology after the Anti-Subversion Law, which previously made it a crime to be a member of the Communist Party of the Philippines, was repealed nearly 3 decades ago.

The government has also used state-owned platforms to attack the media, released statements and actions that undermine the concept of academic freedom, and even posted an erroneous list red-tagging alumni of UP.

“By allowing the government to choose words to say, or ideas we may engage with, stifles academic freedom and freedom of speech, which are essential to one’s education, and for democracy,” Labiste said.

In order to combat red-tagging as a form of disinformation, Labiste said student publications can use campus journalism as a counterspeech: “Be brave. Engage in counterspeech. History is on your side.”

“When Marcos shut down the press, campus publications were also shut down. It was only years later when they were allowed to operate. So there’s this tradition of campus press of asserting press freedom,” Labisted added.

Labiste also stressed that campus journalists can do better than other mainstream media because they are not tied to corporate sponsors and commercial investors.

“Campus publication fills the gaps left by mainstream media. We call it counter reporting. Some news are not so sexy for commercial media or in mainstream media to cover but campus press have been covering the issues,” Labiste said.

While journalism has evolved, UP Diliman College of Mass Communication professor Yvonne Chua echoed Labiste citing how fact-checking done in the digital era is also a form of counterspeech.

“It [fact-checking] is more complicated, however, [as] it necessitates a plethora of knowledge, skills, tools and techniques,” she said, emphasizing the importance of implementing educational interventions to combat disinformation.

In a research she conducted, Chua’s findings showed that there were still individuals who misclassified news that were critical of the state or the president as fake. Authoritarian leaders have cultivated this sentiment .

“One of the things that we need to remember as journalists is to never abandon our duty to verify information,” she said.

In 2019, UP and its partners from other universities and several media organizations established “Tsek.ph,” a website consolidating claims they’ve fact-checked in connection with the May 2019 Philippine elections.

For UP Visayas Chancellor Clement Camposano, academic institutions need campus journalists who are not only good at reporting but are also “generous with their opinion and will not shy away from hot button issues.”

“We should stop thinking of campus journalism as some kind of an embellishment, something like an extracurricular activity. It’s way more than that. You have to think of how campus journalism is an essential ingredient in maintaining the spirit of discourse inside campuses. They play a very important academic role,” Camposano added.

Philippine Daily Inquirer columnist John Nery said that campus journalism should not be seen as “as practice journalism.”

He added that campus journalism, in fact, can be used not only as a loudspeaker for campuses but also as a megaphone to reach other citizens worldwide.

Nery added that campus journalists can not only utilize digital technology to redefine journalism but to also explore ways on how this could be used to serve as a platform for the public.

This webinar focusing on campus journalism is the 1st of the 3-day national online conference organized by UP Visayas in partnership with MovePH, Rappler’s civic engagement arm. More than 220 participants from various schools and organizations joined the event.

The other sessions of the national conference will tackle more about “Clickbait: Media and the Rise of Disinformation” and “Power of the People and the Press” on February 24 and 26, respectively.

The conference is free and interested participants must register through this link or visit 2021 Democracy and Disinformation by UP Visayas Facebook page – with a report from Ysabel Vidor/Rappler.com