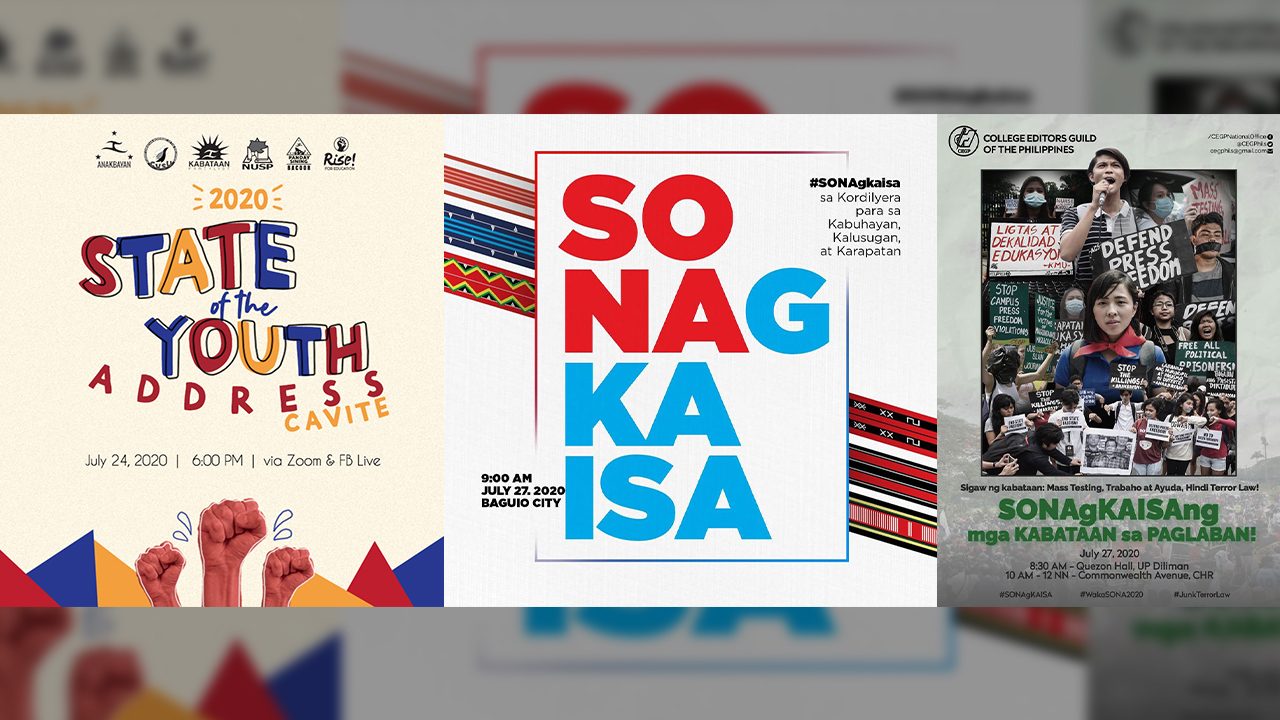 Graphics from Kabataan Partylist Cavite, College Editors Guild of the Philippines, and Movement Against Tyranny-Metro Baguio

Facebook Twitter Copy URL
Copied
Ahead of President Rodrigo Duterte’s 5th State of the Nation Address, several activities will be held to highlight the various issues faced by the different sectors

As President Rodrigo Duterte is set to deliver his 5th State of the Nation Address (SONA) on Monday, July 27, various Filipinos are banding together for a united protest action called the People’s SONA.

Ahead of the protests, several groups are also organizing activities to highlight the various issues faced by the different sectors during Duterte’s 4th year in power.

These protests and activities are set against the backdrop of the recent passage of the controversial anti-terrorism law, and the shutdown of the country’s biggest media network ABS-CBN.

With quarantine restrictions being implemented in Metro Manila and other high-risk areas in the country, some protesters will bring the fight online.

Ahead of Duterte’s SONA, youth groups are leading an online State of the Youth Addresses (SOYA) to amplify the issues faced by students during the pandemic.

Among these is a Cavite-wide State of the Youth Address led by Kabataan Partylist-Cavite, National Union of Students of the Philippines, and Southern Tagalog Youth Parliament to be held on Friday, July 24, at 6 pm.

The address, which will feature talks on education and democracy in light of Duterte’s SONA, can be accessible via Zoom and Facebook live. Rising online personality “Aling Marie,” who went viral after putting up a brave stand on various social issues will attend the said address.

To join the online protest, you can sign up at https://tinyurl.com/SOYACavite2020 and check https://www.facebook.com/KPLCavite for updates.

Centering on climate emergency and the fight for climate justice during the pandemic and under the cloud of the anti-terrorism law, the Philippine Movement for Climate Justice will hold its own State of the Nation Address on Friday at 10 am. The address will also be available via Zoom and Facebook live.

Community leaders from Bataan, Bulacan, Quezon, Pangasinan, Zambales, and Cebu will serve as the panel speakers, together with representatives from different environmental and people’s organizations.

On the other hand, Akbayan Youth and YouthResist will convene online to discuss the State of the Nation Address through the eyes of the youth on Friday, from 3:45 pm to 4:45 pm.

Dubbed the Youth SONA Laban sa Tsina, the address can be accessed on Akbayan Youth and Youth Resistance‘ Facebook pages through their Facebook live.

Samira Gutoc will join the Youth SONA Laban Sa Tsina, which will tackle the government’s acquiescent attitude towards China and its effects on the state of democracy, human rights, and sovereignty of the country.

To join the regional SOYA, you may register at http://tiny.cc/SOYA2020 and check their Facebook page at https://www.facebook.com/ST.SOYA18 for details.

To provide a clearer picture of the country under the Duterte regime, online discussions about the current situation of human and democractic rights will also be conducted a few days before the President’s SONA.

The League of Filipino Students will conduct a series of  online discussions  from July 22 to 25, centering on the theme “Mga diskusyon at training bilang paghahanda sa SONA.”  (Discussion and training in preparation for SONA)

To join, you can register at: https://forms.gle/yvq3ovksatDmEG1C6.

Meanwhile, various mass organizations from the University of the Philippines-Los Banos (UPLB) including Gabriela Youth, Panday Sining, League of Filipino Students and Anakbayan will stand united in a Zoom rally on Sunday, July 26, at 3 pm.

The rally seeks to criticize the governance of the Duterte administration and scrutinize attacks to human rights and press freedom.For more updates on how to join the Zoom rally, you may send your inquiries to Ilyana Acervo at 0933-417-9474. Participants may also message the Facebook pages of the Gabriela Youth UPLB, Panday Sining UPLB, Anakbayan UPLB, National Network of Agrarian Reform Advocates, and Student Christian Movement of the Philippines UPLB to join the online rally.

On the day of the SONA, the massive protest – themed #SONAgkaisa – aims to unite progressive groups, organizations and coalitions across the country to amplify the most pressing issues of the Duterte administration. This will happen as usual along the Commonwealth Avenue.

However, due to the coronavirus pandemic, they are restricting the protest to the hours of 10 am to 12 pm.

Some 60 youth groups and student organizations are also expected to join the protest calling for the suspension and freezing classes until the pandemic is quelled in the country, and denouncing attacks against the youth and student journalists.

During the main protest, the Concerned Artist of the Philippines (CAP) is set to bring protective rain gear calling to junk the Anti-Terrorism Law, symbolizing their stand towards the needed safety and protection of cultural workers from the virus and the continuous attacks of the administration.

CAP will also be launching a mural and featuring musical collaborations at the #SONAgkaisa mobilization as part of its #ArtistsFightBack advocacy.

Movement Against Tyranny, meanwhile, encourages protesters to tie red and black ribbons on gates, fences, vehicles, and wrists in the protest, as a symbol of resistance.

Below are the other activities happening on the day of Duterte’s SONA:

A Mass for Justice and Peace will be held Monday 12:15 pm at the Manila Cathedral. The effort seeks to provide the public an avenue to protest and pray for justice and peace through a Catholic Mass held hours ahead of Duterte’s SONA.

The Mass will have a live telecast on TV Maria, Radyo Veritas, and opposition senator Risa Hontiveros’ Facebook page.

In Calabarzon, Bagong Alyansang Makabayan (BAYAN) Timog Katagalugan together with various progressive groups and church organizations will hold a massive regional mob on Monday at 2 pm to condemn the misplaced priorities of the government during the pandemic, denounce state killings, and seek for genuine agrarian reform.

The rally will be held at the Carabao Park in the University of the Philippines Los Baños.

Dubbed the #SONAgkaisa sa Kordilyera para sa Kabuhayan, Kalusugan at Karapatan, a series of events will be conducted on the day of the SONA, to denounce human rights violations, the administration’s “mismanagement” of the coronavirus pandemic, and “lackluster” government aid for Filipinos who are suffering economic losses.

From 9:30 am to 11 am, a forum tackling government and people’s response in times of crises will be held at the Diocese of Baguio’s Bishops House. It will also feature a situationer on human rights in Cordillera. A prayer rally to seek spiritual guidance for Duterte’s SONA will follow in front of the Baguio Cathedral.

Individuals who cannot attend the physical forum will still have a chance to access the event as it will be streamed online at Movement Against Tyranny Metro Baguio’s Facebook page. – Rappler.com