Photo from College Editors Guild of the Philippines

Various groups nationwide urged the government to end its dependence to the United States and China as they raised their call for “true freedom” on Saturday, June 12. This was the second time Filipinos commemorated Independence Day under a persistent COVID-19 pandemic.

They conducted on-ground mobilizations and coastal protests, in an intense call for freedom against attacks on Philippine independence. They urged government to fight back against Chinese militarization of the West Philippine Sea and to end President Rodrigo Duterte’s policy of neglecting China’s encroachment into Philippine waters.

Aside from the calls for Philippine sovereignty, groups also clamored for an end to human rights abuses and the controversial Anti-Terror Law. 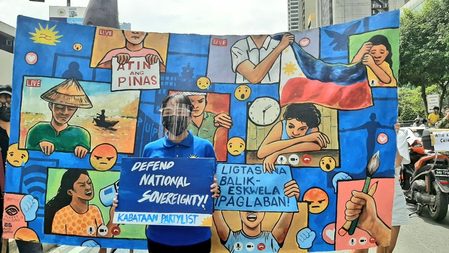 Human rights group Karapatan, which held an earlier demonstration at the University of the Philippines Diliman, urge China to get its hands off the West Philippine Sea.

Makabayan Bloc lawmakers and LGBTQ+ organization Bahaghari urged the government to end China and US dependence and called for the ouster of President Duterte.

The Student Christian Movement of the Philippines (SCMP), which described Duterte as a “puppet,” slammed the government’s neoliberal policies such as the economic charter change, the CREATE Law, and jeepney phaseout.

Filipino activists from Milk Tea Alliance, the largest international solidarity movement in Asia for human rights & democracy, joined the Makati protest and also stood in solidarity with activists in Hongkong, Thailand, and Myanmar, who were also experiencing persecution from their governments.

After the protests at the consulate, the caravan went to the Israeli embassy in Taguig to show support and solidarity with Palestine and urged the US-Israeli forces to stop the terrors in Gaza strip and Palestine lands.

Fishers in Botolan, Zambales, kicked off Independence Day protests by marching along the shorelines of West Philippine Sea. They were chanting, “Atin Ang Pinas! China Layas!” while carrying Philippine flags.

These fishers used to frequent Panatag Shoal (Scarborough) until it was occupied by Chinese forces.

PAMALAKAYA also added that “it is unlikely to regain control of West Philippine Sea not especially under the Duterte regime which is subservient to China”. For them, “Duterte’s subservience emboldens China to become more aggressive in our territorial waters.”

In Kawit, Cavite, where independence from Spain was declared 123 years ago, Southern Tagalog activists and other concerned groups staged a protest denouncing “false liberty” as the country still grappled with US and China imperialism.

In Bacolod City, progressive groups led by Bayan Negros also commemorated the Independence day through a protest-march towards the Fountain of Justice to denounce Duterte’s continued puppetry to US and China and the human rights abuses in the region.

Negros Island is one of the hotspots for cases of police brutality and killings, with activists being constantly targeted with death threats.

In the Duterte hometown, youth and workers from BAYAN – Southern Mindanao led a bike protest going to the Chinese Consulate in Davao to demand Chinese forces to leave the West Philippine Sea.

However, they failed to reach the consulate as the police barricaded the road to the Chinese consulate.

“We condemn these acts of the police in Davao City as they became instruments of the Duterte regime to be the defender of their imperialist masters — US and China,” Kabataan Southern Mindanao said in a tweet.

Other groups held their activities online to show solidarity with the Filipinos on Independence Day. – Rappler.com

Joven Jacolbia is a Rappler volunteer studying organizational communication at the University of the Philippines Manila (UPM). He is Editor-in-Chief of Assortedge Media and Research and Education Head of Bahagsari UPM.