Who is Joie Cruz and why are Duterte fanatics and trolls attacking her? Facebook Twitter Copy URL
Copied
'It's not really fear that defines us,' says the daughter of a tireless nurse who died due to COVID-19. 'It's our courage.'

While grieving, Joie Cruz decided to speak up about her mother, Maria Theresa Cruz, a dedicated nurse from Cainta, Rizal, who died on July 22 at the age of 47 due to COVID-19.

In an August 11 Facebook post that has since gone viral, Joie said her mother continued to work at the Cainta Municipal Hospital during the pandemic despite the health conditions that made her particularly vulnerable to the virus. She lamented that after she died, the family got only a pittance from the hazard pay that government promised to give her.

The post triggered an avalanche of empathy for her and anger towards the situation of her mother, getting at least 32,000 online reactions and 3,000 comments and shared at least 24,000 times.

Her story was picked up by at least 3 news organizations – ANC, One News, and Rappler.

Duterte fanatic Mark Lopez accused Joie of making false claims and using her mother’s death to criticize the government. And then Lopez dragged Rappler into the fray, asking the grieving daughter about her supposed connections to the news organization. His post was shared by Mocha Uson, among others.

Indeed, Joie is a former Rappler volunteer and intern. She spent several months in the organization to help bridge online movements with communities working for real-world impact.

In 2017, she helped Rappler organize the Social Good Summit in September that year, an annual global event that calls attention to actions that address the world’s most pressing problems.

Before this, as a student of UP Los Baños, she worked as an intern and volunteered for Rappler’s Project Agos, which used technology to bring together government agencies, rescue and volunteer organizations, and communities during major disasters. 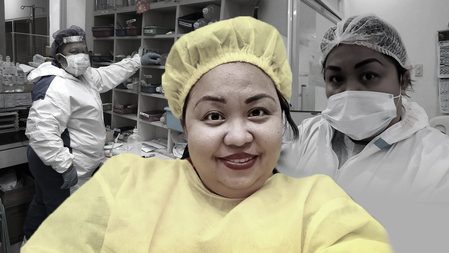 But Joie is more than that.  Even as she is being trolled, she’s busy helping local governments innovate so they could serve their constituents better.

Joie left Rappler in January 2018 to pursue her other passions. Like her mother, Joie valued serving the public.

“I started my career in government in 2014, that was the time I saw the things that can be improved. And so when I started my own company on people-centered design, we focused on public sector innovation because of my experience in government,” Joie told Rappler.

Before her brief stint with Rappler, Joie served as the communications and marketing lead at the Department of Information and Communications Technology (DICT) from 2014 to 2016.

She also worked in a non-profit organization where she helped showcase Filipinos’ creativity, at one point organizing trade shows in France to show animation by Filipino artists.

In 2017, she founded Limitless Lab, a strategic design and innovation company that challenges the status quo using different methodologies including design thinking, lean, and agile.

“Moving to a private organization can help me do more because there are less restrictions and less bureaucracy and I can make change more concrete,” Joie said.

For Joie, Limitless Lab is the merging of her personal advocacies, skills, and experiences.  Through her expertise as a design strategist and a development worker, she has actively worked with various government agencies, offices, and businesses to help address bottlenecks in their bureaucratic processes.

“There are really dedicated public servants whose been [in the government] for decades and our mission is to help them innovate. I chose to be in the private sector to create my own agency because I know that I can do more but at the same time, I can still work with the government,” Joie emphasized.

Her organization has trained around 100 government leaders on design thinking to help them craft the right policies and projects for their constituents.

In fact, during the pandemic, Limitless Lab helped curate LGU innovations for a better and faster response. “Because I believe that for progress to really happen in this country that we love, we really need to empower our government,” she said.

“The point of the government is to serve the people. But most of the time, some government agencies are very solutions-based without even consulting the people [about what] they are going through and what their problems are. So it’s important for government leaders to know these things so that they can craft the right policies and the right projects,” she added.

Although she is worried about how the attacks against her could affect her family’s safety and work, she is undaunted.

“Well, I am really doing this because I love my country, even if it’s so hard to love it right now. It’s not really fear that defines us, it’s our courage. And the point really of this is to act on love, love for our country and also to honor the fight that our front liners are going through.” – Rappler.com