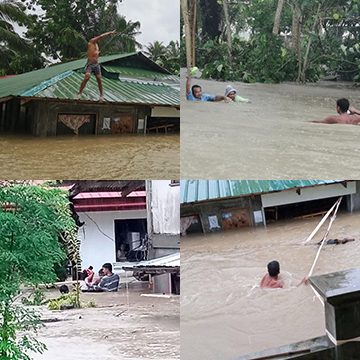 Dante made landfall six times in the Philippines as of Wednesday. This were in Sulat, Eastern Samar, Cataingan and Balud in Masbate, Romblon and San Agustin in Romblon, and Pola, Oriental Mindoro.

In Barangay Taboboan, Odiongan town in Romblon, residents wade through chest-deep floodwaters, after heavy rain hit the municipality on Wednesday. To escape the flood, some residents climbed onto their roof.

Some residents of Sitio Torrel, in Barangay Dapawan, Odiongan were evacuated by the Philippine Army, Philippine National Police and the municipal Disaster and Risk Reduction Management Office.

Part of the Cantingas Bridge in San Fernando, Romblon was damaged due to the strong river current and heavy rain.

LOOK: Part of the Cantingas Bridge in San Fernando, Romblon gets damaged due to the strong river current and heavy rain caused by #DantePH on Wednesday, June 2.

The provincial government of Romblon on Wednesday suspended classes and work in the government sector.

A day before it made landfall, Tropical Storm Dante also triggered flash floods in the province.

As of 2 pm on Tuesday, June 1, Sitio Basak, Rizal in  Maasin City was submerged due to heavy rain.

WATCH: #FloodPH situation as of 2 pm in Sitio Basak, Rizal, Maasin City due to heavy rain brought by #DantePH on June 1. A resident said that while rain subsided earlier, it strengthened again. Video by Beverly Lorzano-Donato | via @owenh_jake pic.twitter.com/grGASMXa0J

LOOK: Loboc, Bohol is experiencing knee-deep floods as of 4 pm on June 1 due to the heavy rains brought by #DantePH. Photos from Mark Charles Marfe | via @patriciakahanap pic.twitter.com/rup53VVI38

Meanwhile, several trees were uprooted in Loay, Bohol on Tuesday afternoon due to the heavy rain.

LOOK: Several trees are uprooted in Loay, Bohol around 4 pm on June 1 due to the heavy rains brought by #DantePH. Photos from Beryl Mae Villanueva | via @patriciakahanap pic.twitter.com/rVJaDoNxCU

Houses in Barangay Washington in Kaskag, Surigao City were also submerged in ankle to knee-deep floods.

Video by Gracielle Enato | via @kristelogsimer