The perpetual foreigner: What it’s like to be Filipino American in a time of hate 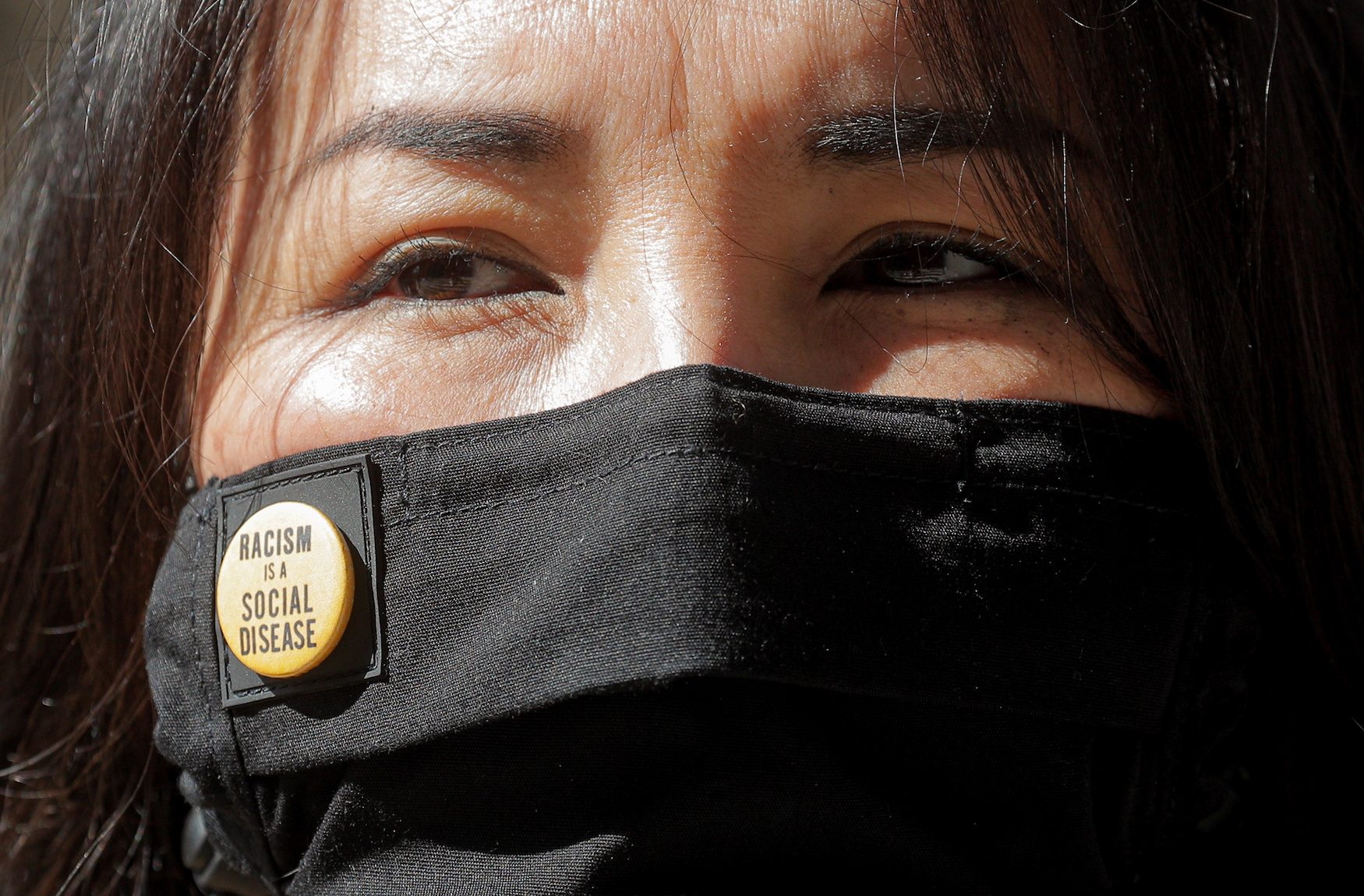 SOLIDARITY. People gather at New York's Cathedral of St. John the Divine during a "Service of Prayer and Witness Against Anti-Asian Violence" in the wake of the Atlanta spa shootings, in New York City, U.S., March 23, 2021.

Facebook Twitter Copy URL
Copied
'Every time someone approaches me from now on...am I going to be terrified that they're about to attack me?' asks Filipino-American Christine Liwag

Christine Liwag walked down the streets of Michigan with her dog when a man came up to her. He pulled down his mask. Liwag waited for the inevitable spouts of bigotry, the ones many in her race had heard for weeks on end.

She tightened her grip on her dog’s leash and prepared to run. But to her surprise, the man just engaged her in small talk.

For months, Liwag had been afraid of going out, not because of the virus, but because of the rise in hate crimes against Asian Americans throughout the United States. Hearing of the attacks against Vilma Kari and Danilo Yu Chang spurred her bouts of paranoia.

The number of people who shared incidents and anecdotes proved to her that her worries were valid.

Majority of news reports have been quick to blame the hate crimes on the rise of anti-Asian sentiment and rhetoric during the pandemic. But Filipino-American history experts have argued that hate crimes are one manifestation of several factors – such as the two countries’ military history, American legislation, and economic depression – that have been seen long before the pandemic.

It is also rooted in how Filipino Americans have been viewed as foreigners throughout history, regardless of citizenship.

In times of depression, disease

Levid cited the Chinese Exclusion Act and Japanese internment as ways in which the state was “mirroring the hatred” or materializing the hatred of society through laws.

The Chinese Exclusion Act of 1882 was enacted by then-US President Chester Arthur after the Opium Wars between Great Britain and China left China in debt. The act ensured that the Chinese would be ineligible for US citizenship through naturalization. Scholars also found that Chinese success in finding gold and other labor intensive jobs threatened white Americans as competitors for jobs and wages.

The Chinese Exclusion Act and anti-Asian sentiment would pave the way for other discriminatory measures like Japanese internment and the imposition of immigration quotas.

The Japanese internment occurred after the 1941 Pearl Harbor bombing when former president Franklin Delano Roosevelt signed Executive Order 9066 into law. This order allowed for the United States military to forcibly relocate Japanese Americans to internment camps because of perceived threats of espionage. Japanese internment also aligned with the US’ recovery from the Great Depression and World War II.

Levid believes Asian Americans now find themselves in a similar situation, as more people lost jobs and faced other economic difficulties during the pandemic. In April 2020, the US unemployment rate reached 14.8% – the worst since 1948, or a few years after World War II.

“What we see is the scapegoating of folks who are…identified as racial minorities or more. I think a better, more accurate way of describing it is people that don’t have power. Whether it is Black people, whether it is Latinos, and in our case, it’s Asians; Asian Americans.” Levid said.

“When the US first invaded the [Philippine] islands, one of the main reasons they set up nursing schools actually was because they want[ed] to teach us how to be hygienic because there were cholera outbreaks. And so, white American doctors and nurses and scientists blamed it on Filipinos being dirty, being diseased. That was an impetus to set up nursing schools,” Sales said, adding that this narrative persists in hate crimes seen during the pandemic.

Racism behind anti-Asian American violence, even when not hate crime 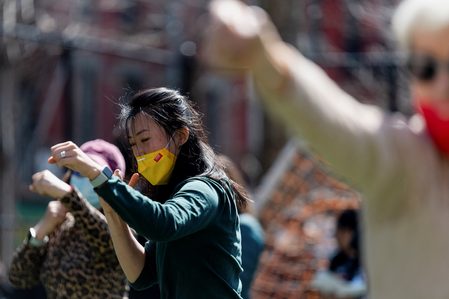 Sales also said that the US’ role on the global stage must be considered when analyzing hate crimes.

She cited an instance at the US House judiciary subcommittee after the Atlanta shooting, where a congressman went on a “tirade” about the Chinese Communist Party (CCP) and how the rhetoric against the party was not a cause for these hate crimes. The committee met to discuss how racist rhetoric could have led to an increase in Asian American hate crimes during the pandemic. Republican Representative Chip Roy of Texas immediately defended the Republican Party’s right to criticize Beijing.

“We shouldn’t be worried about having committee members of Congress policing our rhetoric because some evildoers do engage in some evil activity as has occurred in Atlanta, Georgia,” Roy said.

Sales called this argument “ridiculous,” noting that the antagonism of the CCP was related to the rise of Asian American hate crimes.

It echoed New York 6th District Representative Grace Meng, who told Roy during the hearing: “Your President, your party, and your colleagues can talk about issues with any other countries that you want, but you don’t have to do it by putting a bull’s eye on the back of Asian Americans across the country, on our grandparents, on our kids.”

Sales’ organization, the Critical Filipina/x/o Studies Collective, said in a statement that the US has viewed Filipinos as “perpetual foreigners” since the American occupation of the Philippines. During this period, the Tydings-McDuffie Act was passed, classifying Filipinos as “aliens.”

Levid added that Filipino women, in particular, are at a heightened risk of experiencing hate crimes because of the US military’s relationship with the group. She cited the example of thousands of US troops stationed across Asia and the US military’s history of sexual assault towards women.

A prominent example is the Joseph Pemberton case against Jennifer Laude, where Pemberton killed Laude after finding that she was a transgender female. Nineteen at the time, Pemberton killed Laude by dunking Jennifer’s head in the toilet bowl of their hotel room, causing her to die of asphyxia by drowning and strangulation. Pemberton was later granted full pardon by President Rodrigo Duterte, allowing him to walk free and return to America in 2020.

Though the Vietnam War’s abuses are the most evident, according to Levid, Filipino women are also impacted. The “red light districts” around US military bases show that Filipinas are “sexual playthings” and “disposable,” she said.

Liwag personally attested to this. After writing an article on the sexualized racism Asian American women faced in the United States, she received an email telling her to go back to the Philippines.

“I [say to people who tell me to go back], ‘you don’t think that I’ve had Westerners try to pick me up in the Philippines?’” Liwag said. She added that she experienced men motivating her to go on dates with them for “green cards,” symbols of US citizenship.

“The problem is that a lot of Americans still feel like they own us. And I’ve had people say things like this to me: ‘We used to own the Philippines. Too bad we [now] don’t,’” Liwag said.

Scholars have stated that the Filipino American identity is complex because Filipino Americans cannot be viewed as a monolith. Rick Bonus, an associate professor of American Ethnic Studies at the University of Washington, said that Filipino Americans generally view the community as heterogeneous, not belonging to “one political party” or “one religious group.” 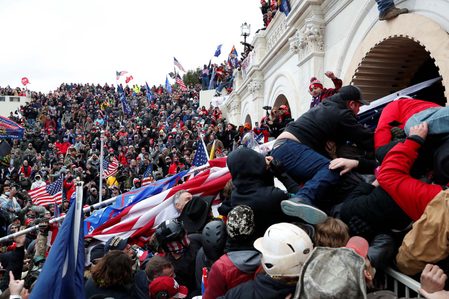 The 2020 US elections likewise illuminated how Filipino Americans, particularly Catholics, identified with the values of the Republican party.

Bonus also added that Filipinos do not always view themselves as Asian because “the stereotypical imagination of Asians” within US society is that they are East Asians.

Still, social factors have led to Filipinos needing to identify themselves as Asians. Bonus cited how his work in the Filipino American studies belongs to Asian American Studies Department. Bonus also cited the US’ census, where all Asian sub-groups are lumped together.

These constructs dispel any notions of diversity between different Asians, Levid said, because of the “identities superimposed” on Filipino Americans. He added that some Filipino Americans believe that their American citizenship will prevent them from being affected by racism embedded in the culture of different US institutions.

“It doesn’t matter. You’re not white. You’re not to the rest of this country. You’re not American enough. You will never be,” he said.

Levid also pointed out that Filipino Americans that deny this create an identity crisis for themselves, likening it to“constantly knocking on a door to a club that you’re never going to be allowed into.”

Levid emphasized the importance of allyship among communities of color, stating that “the other thing is this painful reality that not all the people that are inflicting violence on…Filipinos and Filipino Americans are white.”

Locsin: Attacks vs Filipinos in US to ‘influence PH foreign policy’

When asked why hate crimes against Asian Americans were often not acknowledged in mainstream media, Liwag described how she was advised to do nothing.

“Part of the reason it’s not acknowledged is because we play into that model minority myth so much. We’re trying so hard to assimilate, to not rock that boat,” Liwag said.

Liwag said that Asian Americans have been told to stay quiet because they do not want to be the minority that makes everything about race.

“I was talking to someone who [told] me [that] this is a very powerful moment. All of these Asian American women are suddenly speaking out…. We have been. This has been ongoing, but no one’s listening…. I’ve had people tell me I want to say something, but who’s going to believe me?” Liwag said.

Liwag said, however, that it was important to acknowledge how many individuals did not report on their hate crimes because they did not know who to report to, were unsure if authorities would believe them, or felt shame in being targeted for such hate crimes.

The rise of hate crimes against Asian Americans makes Liwag wary of a post-pandemic world.

“Every time someone approaches me from now on, and I am going to be bracing myself, am I going to be terrified that they’re about to attack me?How do I cope with that in the future? And how long is it going to last?” Liwag said. These are questions she asks not only for herself, but her loved ones, too.

Though Liwag is hopeful about increased vaccinations and looks forward to the end of the pandemic, she acknowledged that racism did not have a vaccine to cure it, which made the pandemic of hate more difficult to cure. – Rappler.com

Razel Suansing is a Rappler intern. This article was done under the supervision of Rappler staff and her copy was vetted by editors.