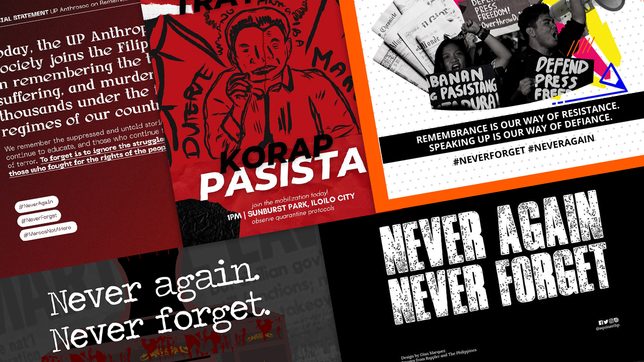 Facebook Twitter Copy URL
Copied
'Duterte is not Marcos, but his wicked crimes remind us of the atrocities we fought against 48 years ago, and the democracy we are fighting for now,' says Agham Youth National

Although nearly half a century has passed since the Philippines was placed under military rule, several youth groups aired concerns about the country witnessing a “recurrence” of history on the 48th anniversary of late dictator Ferdinand Marcos’ declaration of Martial Law on September 21.

Drawing parallels between President Rodrigo Duterte and the late dictator, We The Future PH warned the “horrors and trauma of Martial Law now haunt the younger generations today.”

Marcos’ declaration on September 21, 1972 led to almost 10 years of military rule in the country, marred by human rights abuses, corruption, and attacks on press freedom. University of the Philippines (UP) Politica asserted the “systematic human rights abuses and passing of the anti-terror law under the Duterte administration closely parallel the atrocities during the Marcos era.”

Since Duterte assumed office, he had pushed for a violent war on drugs that saw a rise in extrajudicial killings, and witnessed the shutdown of ABS-CBN, the largest broadcasting network in the Philippines after repeatedly threatening to block their franchise renewal.

During his term, the Duterte administration had also enacted the widely criticized anti-terror law, which critics fear might be used against them for its vague definition of terrorism.

“The Filipino people have continued to suffer blow by blow, while human rights violators and murderers with the likes of Joseph Scott Pemberton and Debold Sinas continue to walk free and have even gotten promoted to the highest seats of power in the government,” said the University of the Philippines Visayas College of Fisheries and Ocean Sciences Student Council.

“Duterte is not Marcos, but his wicked crimes remind us of the atrocities we fought against 48 years ago, and the democracy we are fighting for now,” added Agham Youth National.

Youth groups saw these policies, especially citing the anti-terror law, as efforts of the administration to implement a de facto Martial Law as the country struggles under the weight of the pandemic.

“While the constitution has been rightfully modified after the ouster of the dictator, a similar draconian document has been put in place…The Anti-Terror Law is an accumulation of various policies implemented throughout Duterte’s rule – that of which neither serve nor pay attention to the population and different marginalized groups in the country,” said University of the Philippines Anthropology Society.

On the 48th anniversary of the declaration of Martial Law, youth groups lamented the rampant disinformation and historical revisionism that surround the late dictator and his authoritarian rule.

The UP Visayas College of Fisheries and Ocean Sciences Student Council criticized the bill declaring Ferdinand Marcos’ birthday as a holiday in Ilocos Norte for being an “added insult to the thousands who died during the Marcos era and to those who have been killed under the Duterte regime.”

“In the midst of widespread political disinformation and historical distortions that seek to rehabilitate dictator Marcos and Martial Law, it is our duty to #NeverForget the lessons of the past, and use them to expose the lies and tricks of those who seek to chain our nation back to a Dictator’s Iron Hand,” said WeTheFuture PH.

Condemning the numerous violations brought by the Marcos regime and the Duterte administration, youth groups echoed calls to speak out and stand against abuses from the government, despite the looming threat of the anti-terror law.

“Now that we face another threat at the hands of the current administration where our democracy and human rights are at a standstill, let this serve not only as a reminder, but a call to action to all youth nationwide to stand firmly against all abuses by our government,” said the National Union of Students Philippines-High School.

Pioneer Publication, the official student publication of Palawan State University, challenged student journalists and the youth to rise to the challenge of preserving and defending history from revisionists to avoid seeing a rehash of martial law in present-day..

“For every falsehood propagated about Martial Law, we must fight back with truths and facts…We call on our fellow students, campus journalists, lovers of freedom and democracy, to make sense of our history, and if necessary, to protect our freedoms,” said Pioneer Publication.

“No dictator and pandemic will silence the voices of Filipinos who are fighting for their rights and freedom. Now more that ever should we stand up together to ensure that it is not us who will be overthrown in our own country, but them whom we catapulted to their current positions,” added the Bellows Publication, the official student publication of Aquinas School. – Rappler.com