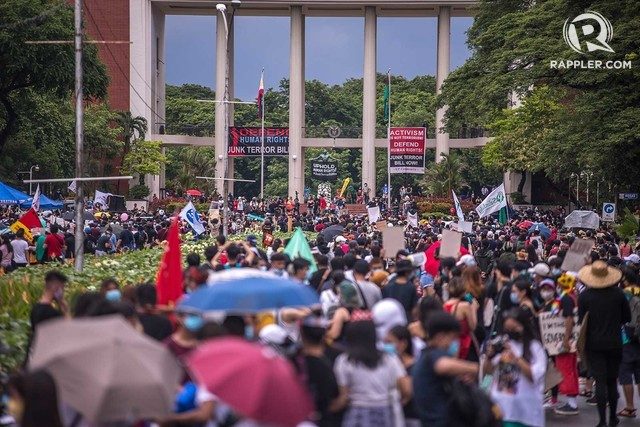 Student activists from various schools join militant groups ifor the Grand Mañanita protest rally at the University of the Philippines, Diliman, QC on June 12, 2020 as the contry celebrate its 122nd Independence Day. Photo by Darren Langit/Rappler

“Despite the opposition from a broad array of sectors, it is clear that Duterte doesn’t listen to the Filipino people,” said Student Christian Movement Spokesperson Kej Andres during the impromptu online protest. (READ: ‘The demise of democracy’: Filipinos denounce signing of anti-terror law)

During the protest, youth groups stressed that the anti-terrorism law is a misplaced priority of “a country being ravaged by a pandemic,” adding that the administration must exert its efforts on uplifting the lives of marginalized groups instead. (READ: House of terror: How the lower chamber let slip a ‘killer’ bill)