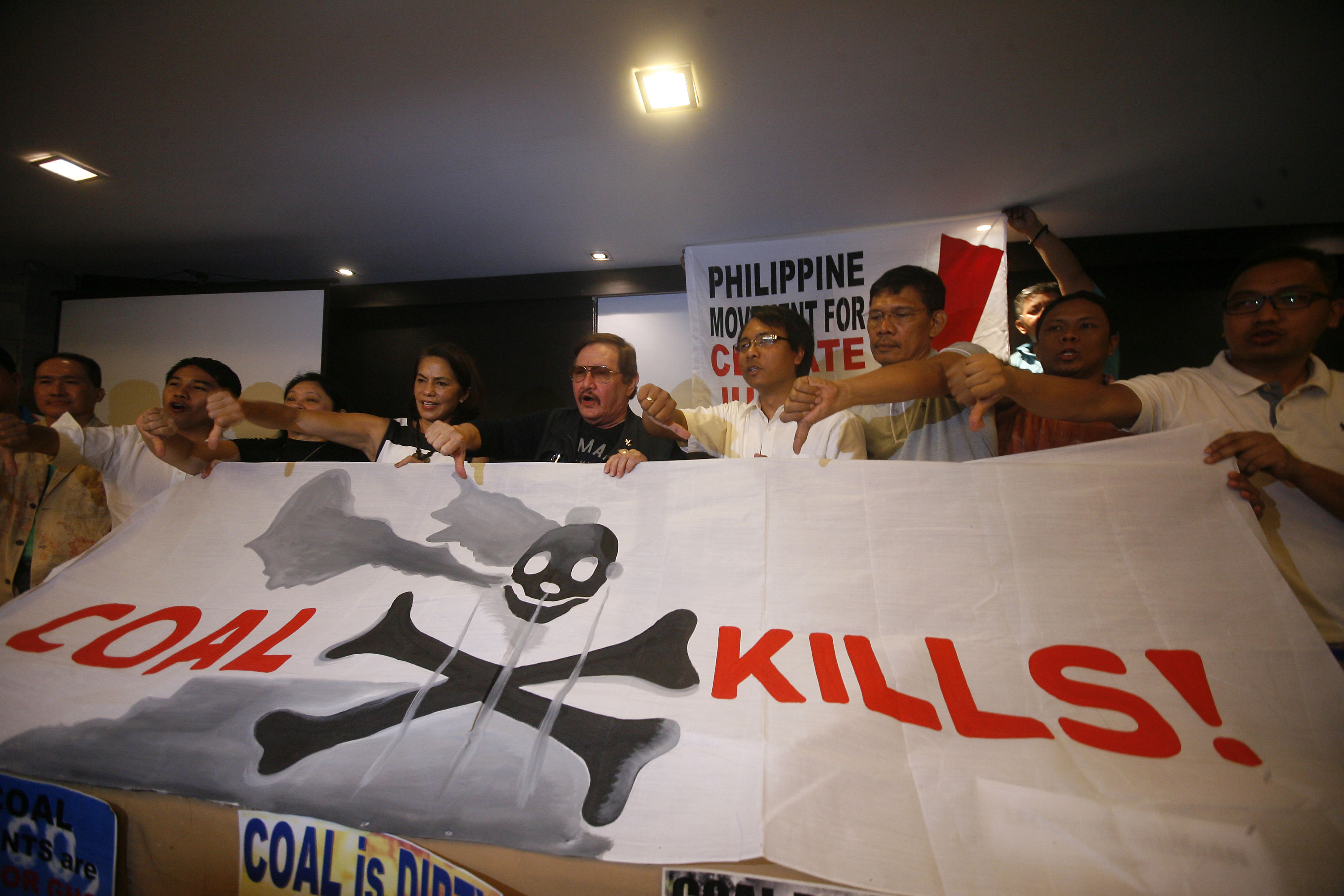 MANILA, Philippines – There’s a growing global trend against the use of coal as an energy source but the Philippine government seems bent on bucking this trend, advocacy groups said on Tuesday, July 21.

“What is simply ironic about this vigorous push for coal-fired power plants in our country is while the whole world is moving away from coal, we are embracing it as the cure for our development challenges. But we know that is not the answer,” said Naderev “Yeb” Saño, a former Climate Change commissioner.

The Department of Energy (DOE) has approved 29 more coal-fired plants, on top of the 17 already existing in the country, according to government data.

Currently, coal comprises 35% of the country’s energy mix. But without intervention, the Philippines is looking at 70% dependence on coal from 2030 to 2050, DOE Undersecretary Loreta Ayson said in a previous Senate hearing.

In comparison, some of the most powerful countries in the world are stepping back from coal, branded by scientists and environmentalists as “dirty energy” because of its toxic emissions. (READ: Legarda questions PH use of coal for energy)

The use of fossil fuels like coal as an energy source is the number one driver of global warming being a top emitter of greenhouse gases.

The United States and Germany are trying to limit its coal power plants. China, now the top greenhouse gas emitter, has unveiled a plan to reduce coal consumption and increase renewable energy use by 2020.

Norway, the country with the biggest foreign investments, has been told by its parliament to divest its holdings in coal companies.

These same countries are instead looking towards renewable energy to power their economies. Germany’s energy mix is now dominated by renewable energy. China has become a leading manufacturer of solar panels.

A new Tesla battery for solar power is revolutionizing RE storage capacity, long regarded as its Achilles’ heel.

The DOE has said coal is here to stay for a while yet because of its cheap construction cost.

“The energy sector is market driven. Investors go for coal because it’s cheaper. If we stop coal now, we have no energy. Transition has to be gradual; in phases,” said Ayson.

But the cost of coal does not consider “hidden” costs like transportation and fuel expenses, he said. In comparison, renewable energy is sourced freely from the sun, wind, sea waves, or hot gas underground.

The public often shoulders the costs of coal, said Muni. “The coal industry benefits from tax exemptions and the importation of coal is almost tax-free.”

The Philippines, rich in all these natural resources, has no reason to shun renewable energy, said Saño, a climate justice advocate.

According to the DOE, the country has the capacity to generate 200,000 megawatts of power from renewable energy alone.

The country has all the right laws in place, but the problem lies in implementation, said Muni.

The Renewable Energy Act and Climate Change Act mandate the government to significantly increase the share of RE in the energy mix.

But Muni says RE investors are crying foul over “unnecessary” caps to RE generation. Right now, the DOE has placed a 500-MW limit to solar power generation. Meanwhile, there is no cap on coal power.

RE supporters agree stopping all coal plants now would cripple the economy. What they want is a transition, and for the government to stop approving the construction of new power plants.

The 29 approved coal power plants, unless stopped, will become operational by 2020. Coal contracts usually last for 20 years, tying the country to the power plant for two decades.

If the national government can’t be persuaded to turn away from coal, local governments can make the final stand, said Edward Hagedorn, a former mayor of Puerto Princesa City in Palawan.

“No matter how much the national government wants a coal power plant, if the local government doesn’t agree, it won’t push through,” he said.

He urged local government leaders to objectively weigh the pros and cons of a coal plant instead of giving in to pressure from pro-coal sectors.

Environmentalists also say the country’s aggressive coal policy runs counter to President Benigno Aquino III’s commitments to be at the forefront of the fight to curb climate change. – Rappler.com