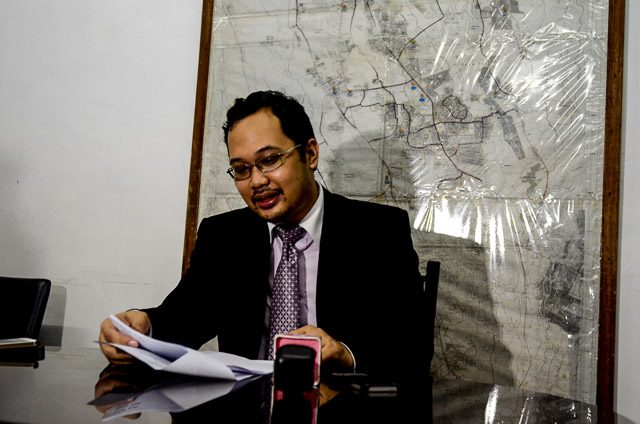 Facebook Twitter Copy URL
Copied
The INC sends a lawyer to handle the case of a minister earlier reported to have been 'abducted'
CAVITE, Philippines – Was Iglesia ni Cristo (INC) minister Lowell Menorca II abducted, as earlier reported by some church members?
A lawyer sent by INC to where Menorca is currently detained in Dasmariñas, Cavite, denied the report.
Allen Blair Boy said Menorca was neither “abducted” nor “kidnapped.”
Reports from some INC members, however, showed that Menorca was arrested in Sorsogon while he was leading church services. He is apparently identified with one faction in the Manalo family that is now squabbling.
But police reports and Boy himself said that Menorca, 38, was arrested in Dasmariñas City, Cavite, for threatening bystanders with a hand grenade on Friday, July 17.
Boy added that he had no knowledge of the alleged abductions concerning his client.
But he also admitted it was his first time to meet Menorca after the INC sent him to assist the minister on Thursday, July 23, the same day the controversy in INC broke out.
“Base po sa pagkakausap ko sa kaniya kanina, hindi daw po totoo ‘yun. Sabi niya lang may nagsampa ng kaso sa kanya tungkol sa pagdadala ng granada,” said Boy, the lawyer sent by INC to handle the case of Menorca.
(Based on what we talked about earlier, he said there was no truth to it [abduction]. He just said that a case was filed against him for carrying an explosive.)
Menorca also declined interviews with the media, according to Boy.
Grenade?
Menorca was arrested along Aguinaldo Highway, Dasmariñas City, Cavite for threatening two construction workers with a hand grenade, according to Police Supt Joseph Arguelles, chief of police of Dasmariñas City.
Edwin Naling, one of the construction workers, saw that the grenade was taped and grabbed Menorca while bystanders restrained him and pulled the grenade away, according to initial investigation.
According to Arguelles, Menorca did not fight back when he was arrested. “Tahimik lang siya kahit dito sa detention cell…And as far as I know, wala pa siyang bisita,” Arguelles added.
(He’s quiet in his detention cell. And as far as I know, he has not had any visitors yet.)
Dasmariñas City police has already charged Menorca with grave threats and illegal possession of firearms and explosives in violation of Republic Act 8294.
Boy said Menorca sent a letter on July 17 to Iglesia ni Cristo asking help for his case. The INC administration received the letter on Sunday, July 19, and directed the case to the New Era University’s legal aid.
Boy, who also taught Labor Law in New Era University, said he received Menorca’s case on Thursday and immediately went to Cavite to check the case.
Boy said they will file a counter-affidavit once the case reaches the court. – Rappler.com