SONA 2015: How Aquino fared in disaster management since Yolanda 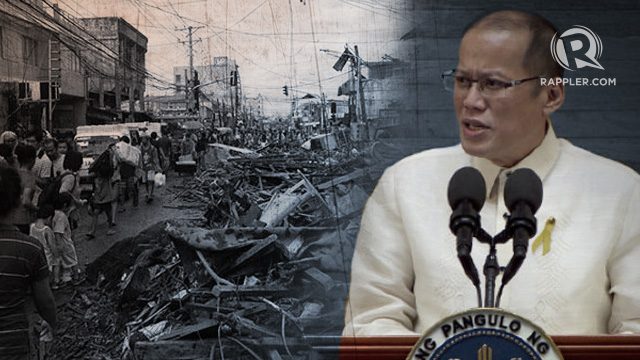 MANILA, Philippines – The last quarter of 2013 was a rough year for the Philippines, especially in disaster management and response.

In September, a magnitude 7.2 earthquake struck the Visayas region, destroying centuries-old churches in Bohol and Cebu. In November, the strongest typhoon to ever make landfall also devastated the Visayas, killing more than 6,000 people.

The administration’s response to both disasters left much to be desired. Thus, when President Benigno Aquino III delivered his State of the Nation Address (SONA) in July 2014, among the 3 things that made people angry, according to Rappler’s SONA Mood Meter, were his statements on the rehabilitation plans after Super Typhoon Yolanda (Haiyan).

However, much has changed in the area of disaster management in the country since Yolanda struck.

In May 2014, two months before Aquino delivered his 5th SONA, the President appointed Office of Civil Defense undersecretary Alexander Pama as the new Executive Director of the National Disaster Risk Reduction and Management Council (NDRRMC). (READ: FAST FACTS: the NDRRMC)

Since then, the council has significantly improved the way it responded to destructive typhoons that had visited the country.

The timeline below shows how disaster mitigation and preparedness efforts have changed since Typhoon Yolanda and the Visayas earthquake struck.

How about Yolanda recovery efforts?

But while preparedness and response efforts appear to be improving, the administration’s performance in relation to helping areas affected by past disasters still leaves much to be desired.

Budget watchdog Social Watch recently criticized the administration for releasing only half of the funds needed so far for Yolanda rehabilitation, despite the fact that it is now only months short of Typhoon Yolanda’s second year anniversary in November 2015.

A total of P170.92 billion ($3.76 billion) for resettlement, infrastructure, livelihood and social services is needed according to the Comprehensive Rehabilitation and Recovery Plan (CRRP). (READ: ‘Mismatch’ in Yolanda resettlement fund estimates – watchdog) Of this amount, only P82 billion ($1.80 billion) has been released by the Department of Budget and Management (DBM), according to Social Watch Convenor and former National Treasurer Leonor Briones.

To a large extent, this was because funding for the Yolanda recovery program had  to be sourced from the same budget sources as other calamities, budgeted funds as a result were very small compared to the needs specified in the CRRP, according to Briones.

To a large extent this is because the CRRP was submitted to President Benigno Aquino III. only on August 1, 2014, after the administration has already submitted to 2015 budget to Congress.

The CRRP was approved by the President only on October 29, 2014, almost 3 months after it was submitted by the Office of the Presidential Assistant on Rehabilitation and Recovery (OPARR), and almost a year after Yolanda.

The President generally submits the proposed budget for the following year to Congress during the SONA. Congress then reviews and approves the president’s proposal before the fiscal year ends. The 2015 national budget was approved by the House of Representatives on October 29, 2014, and then by the Senate on November 26. Its final version was concurred in by both Houses of Congress on December 15.

To add to the problem, the capacity of agencies to implement projects is also limited.

Briones emphasized in the forum that there is a need to have a clear central body that has stronger teeth to aid in implementation. Agencies alone have their own work to prioritize, she said. To date, the following funds have already been released to agencies involved in Yolanda rehabilitation and recovery.

The absence of a clear authoritative body that will implement, oversee and monitor all initiatives was a problem, Briones said.

The implementing agencies were “not prepared to take on a very huge task,” Briones explained.

Following Super Typhoon Yolanda, the President created the Office of the Presidential Assistant for Rehabilitation and Recovery (OPARR) and appointed former Senator Panfilo Lacson to head it. He has since resigned from the post.

Briones noted that the OPARR lacked a strong mandate to push for urgency in implementation.

“It’s still business as usual for government and the agencies to appear to have no sense of urgency in dealing with a humanitarian crisis,” she said. “Having a clear authority will fast-track implementation of key efforts.” – with reports from Gwen de la Cruz and Aika Rey/Rappler.com