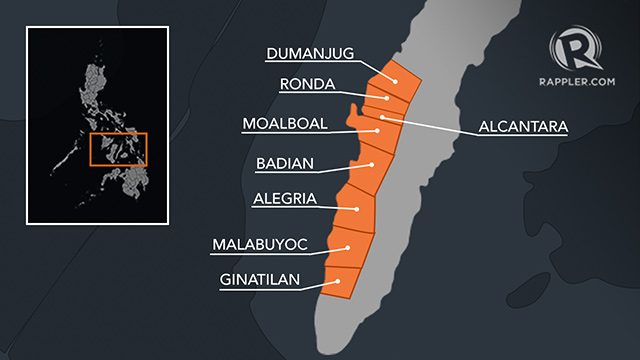 CEBU CITY, Philippines – On July 28, the Senate approved a bill creating the 7th district for the province of Cebu, dividing the existing 15-town second district into two.

The Senate’s official gazette announced that the bill seeking to create an additional legislative district for Cebu province was approved on 3rd and final reading.

The measure was introduced in the House of Representative by Cebu 2nd District Representative Wilfredo Caminero and co-authored by Representatives Benhur Salimbangon (Cebu 4th), Aileen Radaza (Lapu-Lapu Lone), and Gwendolyn Garcia (Cebu 3rd). (READ: Congressional races: Will there be 15 more in 2016?)

In the Senate, the bill was sponsored by Senator Ferdinand Marcos Jr.

The 7th legislative district will be composed of the municipalities of Dumanjug, Ronda, Alcantara, Moalboal, Badian, Alegria, Malabuyoc, and Ginatilan or the towns in the South facing the western seaboard of Cebu Island.

These municipalities have a combined population count of 223,360 based on the 2010 census of the Philippine Statistics Authority, the Senate gazette said.

The remaining 2nd district will now only be composed of the municipalities of Argao, Dalaguete, Alcoy, Boljoon, Oslob, Santander, and Samboan

“It has the biggest number of barangays at 284 and has 246.8 kilometers of national roads, the longest among the 6 legislative districts of the province. According to the proponents of the bill,” Marcos said.

“The enormous size of the land area of the present second congressional district, as compared to the remaining congressional districts of Cebu province, burdens its present representatives in the effective discharge of its duties to its constituents. The creation of a new legislative district will boost the development efforts not only in the said area but in the whole province.”

The 7th district bill or House Bill 3149 was reintroduced by Caminero in October 16, 2013, in the present Congress. It was previously proposed by then Representative Pablo Garcia, who was Caminero’s predecessor.

In the same year, the Cebu provincial board also sought the creation of a new district.

“These are the very poor municipalities and barangays that are most in need of bigger share of the national resources and services for development and uplifment,” Caminero said in his House bill.

Before the creation of a new district was floated, bills seeking to carve out new province in southern Cebu were previously proposed by then Representative Simeon Kintanar in 2005. This however was met with opposition from most Cebuanos including then Governor Gwen Garcia, who was on her first term. – Rappler.com