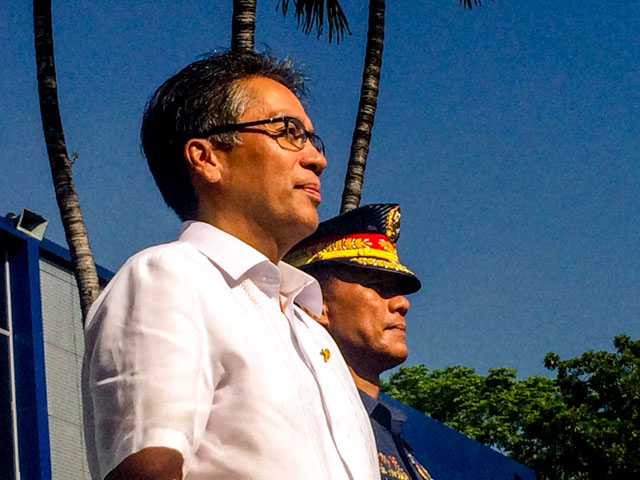 Roxas confirmed this in a press conference Monday, August 3. He said he will be meeting with President Benigno Aquino III Monday afternoon to discuss the transition.

The presidential bet attended on Monday his final flag ceremony as DILG chief at the Philippine National Police (PNP) headquarters in Camp Crame. Roxas already dropped strong hints about his impending resignation during the ceremony.

“We have a lot of plans in store but I will need to entrust you to someone else,” Roxas told police officials.

“God protect you and keep you in His embrace,” he said. “It has been my pleasure and a great honor to serve with you. I give you my snappy salute.”

He thanked the PNP for trusting in his leadership. “Nakiisa kayo at ngayon talagang napakalayo na ng ating narating.” (You worked with me and look how far this  has led us.) 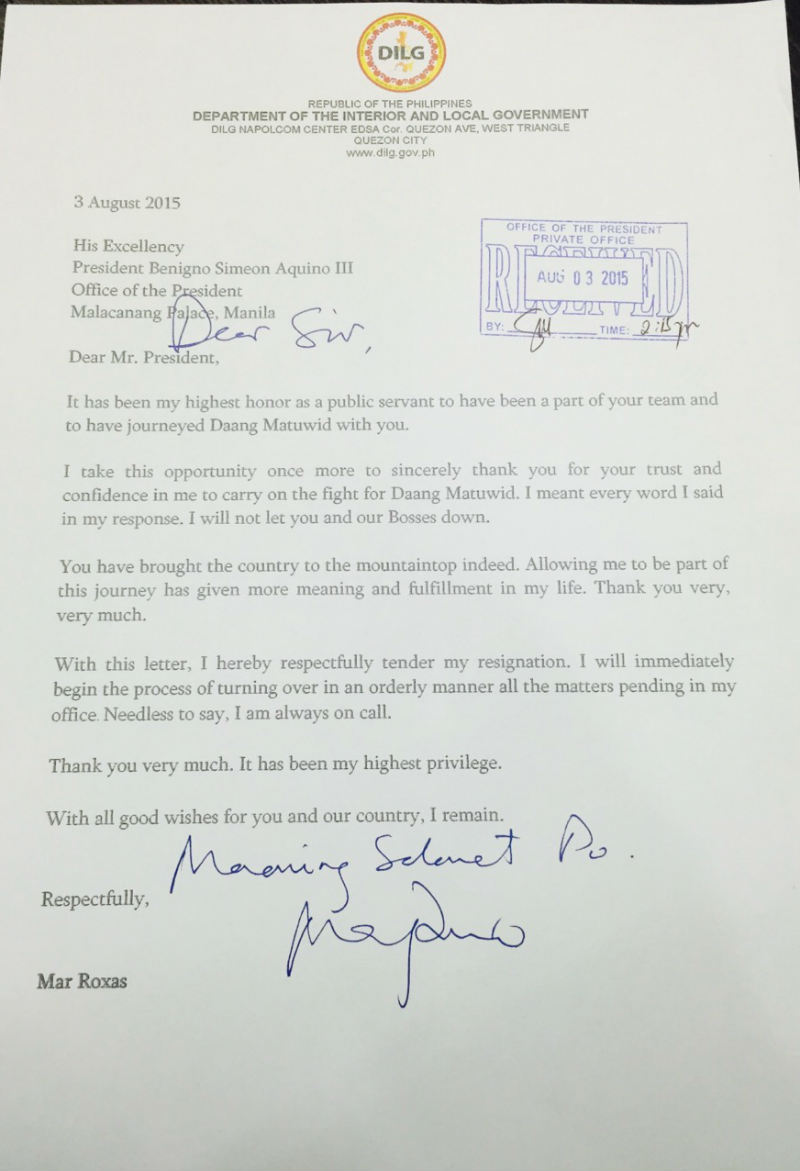 According to one Rappler source close to Roxas, the presidential bet told his allies last July 31, before he was endorsed that day by President Benigno Aquino III, about his plan to quit by Monday.

Roxas had wanted to leave the DILG post weeks before the endorsement but was prevailed upon by Aquino to stay a bit longer, the same source told Rappler. Roxas told reporters there’s no decision yet on who would be replacing him.

Aquino, meanwhile, said that there are “several names” included in the shortlist to replace Roxas, but said he might ask him to stay “a little longer.”

“I’d like him to finish a lot of the things that can be finished before leaving the post and having the transition period,” the President told reporters at the sidelines of the Bureau of Internal Revenue’s 111th anniversary celebrations. The same was said by Executive Secretary Pacquito Ochoa, who confirmed that Roxas had officially tendered his resignation Monday afternoon.

Over the weekend, the camp of Vice President Jejomar Binay, who is also running for president, accused the Aquino adminstration of allowing Roxas to use government machinery for his political plans.

Asked if detractors pushed him to leave his Cabinet post, Roxas said: “I know what’s right. And I’m going to do what’s right. They can think what they want to think. Judge me for what I do or don’t do. Any other assumptions, intrigues, or any other views they have… that’s up to them.”

As DILG chief, Roxas played a big role in many of the crises that hit the Aquino government.

In 2013, Roxas was among the national officials who were at the frontlines of 3 successive problems to hit the Aquino administration: the Visayas quake that devastated many parts of Bohol province; the Zamboanga siege; and Typhoon Yolanda (Haiyan).

In all those disasters, Roxas worked alongside local government leaders, police, fire officials, and jail officers, to respond to and later, normalize the situation.

His role in two of those crises are also fodder for criticism against Roxas. The Aquino administration has been criticized for mishandling the siege, which saw Moro National Liberation Front (MNLF) fighters attempt to take over Zamboanga city. To this day, hundreds remain displaced as a result of the 2013 clash which went on for more than a month.

The interior secretary was accussed of bungling post-Yolanda response and harshly criticized after it emerged that politics was getting in the way of much-needed aid.

So in 2015, it came as a surprise to many that Roxas was kept out-of-the-loop in a top-secret police operation against top terrorists, “Oplan Exodus.” Exodus saw close to 400 elite cops enter Muslim-rebel controlled areas in Maguindanao.

Roxas did not know of the operation until after the casualties were being reported.

All in all, more than 60 Filipinos died as a result of the bungled operation, including 44 of the PNP’s own men.

(Several times, this is how our days have started. There are days where we mourn because our comrades sacrificed their lives. The last line in the song ‘Lupang Hinirang’: Ang mamatay ng dahil sa ‘yo. The essense of our service surrounds and envelops that.)

It was a low in Roxas’ term as DILG chief, during which he was heavily involved in police operations. He would later admit to Rappler that although the clamor for him to resign at the height of the Mamasapano crisis was strong, he ultimately decided against it because it was the “selfish” thing to do. – Rappler.com