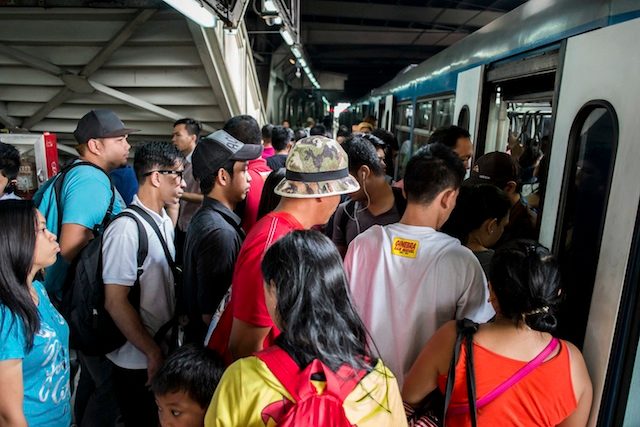 Facebook Twitter Copy URL
Copied
In his 'True State of the Nation Address,' the Vice President says the current and former transportation secretaries are liable for the glitch-ridden MRT3

MANILA, Philippines – While President Benigno Aquino III pointed at his predecessor and a private firm for the problems of the glitch-ridden Metro Rail Transit (MRT3), Vice President Jejomar Binay tossed the blame back to the administration, accusing Aquino allies of appointing an “inexperienced” maintenance provider for the mass transit line.

In his “True State of the Nation Address” on Monday, August 3, Binay insinuated that Department of Transportation and Communications (DOTC) Secretary Joseph Emilio Abaya and Interior Secretary Manuel Roxas II – also a former transportation secretary – are liable for neglecting the upkeep of one of Metro Manila’s busiest train lines.

In his speech, the Vice President said that the services of the MRT3 suffered when its former maintenance provider, Japanese firm Sumitomo Corporation, was replaced by the joint venture of Philippine Trans Rail Management and Services Corporation-Comm Builders and Technology Philippines Corporation (PH Trams-CB&T) in 2012.

(Why did the MRT’s services become a failure? Because the maintenance provider had been changed. And taking the place of the firm Sumitomo, known around the world for its track record, was the new and inexperienced PH Trams Company.)

“At sino ang nasa likod ng PH Trams? Mga kaalyado at kapartido ng dati at kasalukuyang secretary ng DOTC,” Binay added. (And who is behind PH Trams? The allies of the former and current DOTC secretary.)

This is not the first time that the Vice President had pointed to Abaya and Roxas for the MRT’s problems. Last month, Binay’s party, the United Nationalist Alliance (UNA), questioned why Abaya was not among those indicted for graft over the allegedly anomalous PH Trams deal.

Abaya, former MRT3 general manager Al Vitangcol III, and 19 others were charged with graft in September 2014 for awarding an interim maintenance contract without public bidding.

But in July 2015, only Vitangcol and 5 others were indicted over the deal. At the time, UNA said Vitangcol was merely a “scapegoat” for Abaya and former DOTC secretary Roxas.

Roxas, Aquino’s preferred successor for 2016, will be up against Binay for the presidential post in next year’s polls.

He added, “Totoo ngang sa daang matuwid, magkapatid ang kapalpakan at pagnanakaw ng kapartido at kaalyado.” (It is true that in this straight path, failure and the theft by allies and partymates are related.)

In his speech, the Vice President also took a swipe at the Aquino administration’s supposed “insensitivity” to the daily struggles of MRT passengers.

Binay noted that despite having a P4.5 billion budget for the procurement of new trains, the MRT3 continues to suffer from a laundry list of problems: broken escalators, foul-smelling toilets, and fewer operational trains.

(Passengers complain: We are late for work. MRT officials reply: Here’s an excuse letter. Passengers cry for better services. The Palace responds: If you don’t want to take the MRT, take the bus.)

Responding to Binay’s attack of his agency and the MRT, Abaya criticized the Vice President for not offering any solutions to the MRT’s problems, and instead choosing to be “blind to the reality” that the government was already working to improve services for MRT passengers.

In a statement, Abaya said, “Two things are clear from the Vice President’s speech: first, he does not have any solutions at all to MRT-3’s problems; and second, he does not even understand the root of the problem, which is the onerous BLT (build-lease-transfer) contract.”

He added, “This is proof that you cannot solve a problem that you do not understand.”

The DOTC chief also criticized the Vice President for glossing over the Aquino administration’s ongoing efforts to improve services for MRT riders. Abaya cited the purchase of 48 new train cars, the rehabilitation of escalators, elevators, and toilets in MRT stations, and the procurement of over 8,000 new rail tracks, among others.

“These are only the problems that he identified without offering a solution to,” Abaya said.

Responding to Binay’s allegations of anomalies in the DOTC, Abaya said his agency has “fully cooperated” in investigations headed by various probe bodies.

As a parting shot, Abaya also referred to Binay’s own string of corruption controversies. (READ: The Lord of Makati: Can Binay explain his wealth?)

“As brotherly advice to the Vice President, we suggest that he also fully cooperate with investigations into his alleged corruption before the Senate, the House, and the Office of the Ombudsman – and to tell the truth,” Abaya said. – Rappler.com