Spectrum kicks off the Invasion Tour with FrolicFox Productions

(Editor’s Note: The following is a press release from Spectrum Philippines)

MANILA, Philippines — Festival season is fast approaching, and Spectrum Philippines, the producer behind the infamous Invasion Tour, is inviting you to kick it off with its first party in Davao City.

For the past six months, Spectrum has been working and preparing in order to make sure everyone gets a spectacular party experience these coming months. They’re upgrading their gigs by working with local entities and vamping up the following aspects: 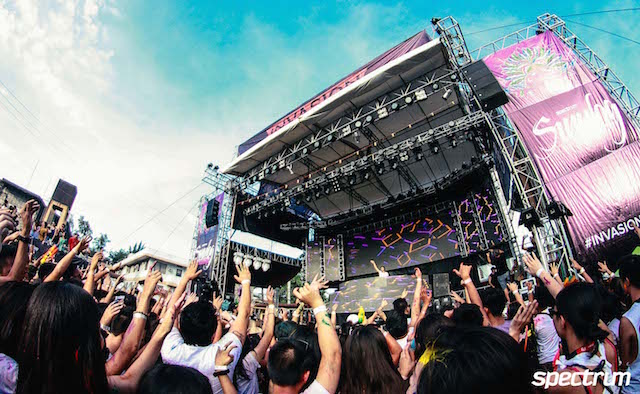 1. Live Stage – The Invasion Tour will feature a brand new, custom-built, state-of-the-art technology live stage. It’s where the electric light and sound experience syncs with the live performances, serving as the platform for select national and international artists, plus your favorite Spectrum DJs.

“We will be infusing a cultural aspect in the show that will feature the native festival elements of each destination. It’s something that has been lost in most [of] the festival parties and we’d like to bring that back to showcase more of the culture of the hosting city,” said Ken Onozawa, CEO of Spectrum.

2. VIP View Deck – The VIP guests of the Invasion Tour will be seated on elevated decks for the best views of the show, with VIP tables and bottle service, as well as complimentary merchandising from participating brands.

All of these upgrades are there to make your party experience bigger and better. “But of course,” says Ken Onozawa, “the most important part of the festival is you, the people. You bring the energy to the festival and to the overall Invasion experience.”

To ensure the Dabawenos a grand festival experience, Spectrum is working with FrolicFox Productions, the producers of SummerFrolic, the annual summer music festival in Mati City. Onozawa shares, “We were very impressed with the way they did their show in Mati, so we hit them up. When we met up for the first time, both our teams got along quite well. We’re very excited to be working with FrolixFox this Kadayawan and in our future projects in the region. Yes, we have more to come.”

Spectrum Lifestyle Experience Inc and FrolicFox Productions share similar values and missions. Their goal is to gather locals and tourists alike, have them enjoy each other’s company in good music, and in promoting Mindanao tourism.

The Invasion Tour is set to hit four major cities in the Visayas and Mindanao on these dates:

With Rappler as an official partner, we’re inviting users to share their experience with us using the hashtags #InvasionDavao and #SharePH.